The global Fluorescent in Situ Hybridization (FISH) probe market size was estimated at USD 618.8 million in 2018 and is anticipated to expand at a CAGR of 6.8% over the forecast period. Increasing demand for In-vitro Diagnostics (IVD) testing for the diagnosis of various chronic diseases is expected to drive the demand in the forthcoming years. Growing demand for IVD is attributed to the high level of reliability, rapidity, and sensitivity of the FISH probe technique, which in turn is expected to propel the FISH probe market.

DNA probe-based diagnostics is gaining popularity in medical diagnostics for the determination of suspected diseases caused by pathogens or bacteria. In addition, identification of new areas for diagnostic markets increased automation of diagnostic tests, and investments in pharmacogenomics and pharmaceutical research are the major factors propelling the growth. Increasing prevalence of genetic disorders such as Acute Lymphoblastic Leukemia (ALL) is further driving the market growth. For Instance, according to the American Cancer Society, almost 7000 new cases of ALL were diagnosed in 2018, with more than 1500 deaths in the U.S. 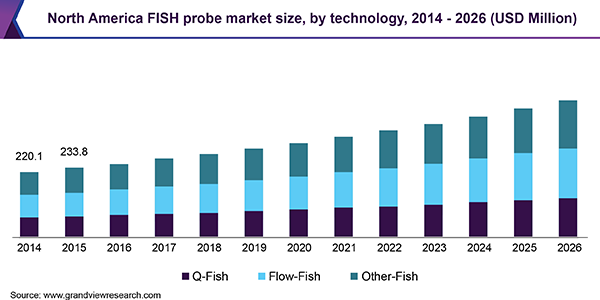 Rising prevalence of diseases having the cytogenetic base such as genetic abnormalities and cancer coupled with the demand for rapid, sensitive, and accurate prognosis techniques for disease validation is anticipated to boost the adoption of FISH probe techniques and thereby fuel the market growth over the forecast period.

Furthermore, increasing R&D initiatives by various key players for the development of novel disease-specific biomarkers and pipeline products awaiting regulatory approval are attributed to the growth of the Fluorescent In Situ Hybridization (FISH) probe market. Rising awareness coupled with increasing healthcare expenditure and the development of novel probes is expected to further drive the market.

mRNA segment held the largest market share in terms of revenue in 2018 owing to the growing demand for molecular profiling by healthcare professionals. Technologically advanced molecular pathology tools that help disease prognosis and stratification for appropriate treatment are further contributing to the rising demand.

RNA probes are majorly used for cancer analysis and are helpful in differentiating between cancer subtypes. Novel probes targeting disease-specific RNA are being developed by companies such as RNAscope series by Advanced Cell Diagnostics for cancer and infectious diseases and Stellaris RNA probe by BioSearch technologies. Recently approved fluorescent hybridization kits for companion diagnostic use include INFORM HER 2/ NEU probe developed by Ventana Medical Systems, PATHYVISION HER- 2 by Abbott Molecular and HER2 FISH PharmDx by Dako Denmark.

Market players are providing tailor-made, accurate probe development services according to the client specifications. Synthesis of RNA probes is costly owing to the cost-intensive nature of reagents, difficult RNA tagging process, and more complicated procedure. However, RNA probes are more preferred, because RNA - RNA hybrids are known to be more stable than DNA - RNA hybrids making the labeling reaction more efficient. Ventana ALK CDx assay by Ventana Medical systems and RG7422 PI3K Inh by Roche Molecular is waiting for approval and is expected to be commercialized over the forecast period.

Fluorescent in situ hybridization probe is most commonly used in research for genetic diseases and cancer diagnostics. Increasing prevalence of cancer across the globe and demand for sensitive, rapid, and accurate molecular diagnostic tests are the factors anticipated to boost the overall market growth in the forthcoming years. In cancer diagnostics, FISH probes are widely used for the detection of breast and lung cancer.

Depending on the current level of implementation and future growth prospects, the genetic disease segment is expected to witness faster demand than cancer and other segments. For instance, the market penetration of the FISH probe application in cancer diagnostics is highest in the current scenario and, hence, the segment accounted for a larger market share.

On the other hand, penetration of these probes for other medical applications is relatively less, thereby accounting for a comparatively smaller market share. However, increasing R&D pertaining to the application of these probes in genetic diseases and other infectious diseases testing is expected to provide a lucrative platform in the near future. In case of genetic disease, the market penetration is less at the present scenario but is expected to grow at a significant rate due to high R&D activities pertaining to the detection of chromosomal aberrations.

The specificity and high sensitivity of this technology and the rapid assays performing speed have made this technique an important cytogenetic test that offers significant benefits in research and diagnostic studies of hematological malignancies and solid tumors. 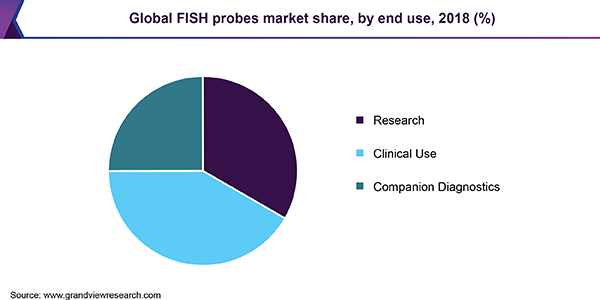 These probes are used in research studies for gene mapping, genetic aberrations, and identification of novel oncogenes in cancer detection and treatment. It also used in molecular-based testing for gene mapping and identification of novel oncogenes. Extensive studies on genetic abbreviation associated with diseases and increasing prevalence of genomic abnormalities and cancers are attributed to the segment growth.

North America accounted for the largest revenue share in 2018. High incidence rate of genetic disorders leading to birth defects, developmental disabilities, and other metabolic syndromes are some of the factors attributed to the growth. According to the Centers for Disease Control and Prevention (CDC), in 2017, around 3% to 4% of newborns in the U.S. were born with genetic abnormalities. Approximately 10% of adults and 30% of children in the country were hospitalized owing to genetic disorders. Fluorescent ISH is estimated to provide 98% accuracy in the detection of chromosomal aberrations leading to such disorders.

In addition, usage of these assays in various diseases such as cancer and genetic disorders is on the rise in this region and is further expected to drive the demand. Rising awareness among people regarding early diagnosis of genetic disorders, increasing disposable income, and highly established R&D infrastructure are the key factors attributed to the market growth. Favorable healthcare reimbursement policies and government reforms are anticipated to push the industry further.

Asia Pacific is anticipated to showcase lucrative growth in the forthcoming years. The industry is growing in terms of revenue generation from the cytogenetics and molecular diagnostic sectors in this region. The presence of supportive government initiatives pertaining to the increasing investments by manufacturers and government in the biotechnology sector and high untapped opportunities are the important factors propelling the regional growth.

In addition, continuous R&D activities for cancer treatment facilitate the demand for cancer research and are expected to fuel the regional demand in the near future. Growing adoption of new techniques for molecular-based cytogenetics, increasing outsourcing activities, and demand for early diagnosis and detection of diseases are anticipated to propel the regional growth.

Companies are adopting competitive strategies such as new product developments, strategic collaborations, and regional expansions to gain an advantage. For instance, in 2016, Oxford Gene Technology expanded its portfolio of Cytocell Aquarius FISH probes in the field of pathology. In addition, in 2016, the company introduced a new range of non-human fluorescent in situ hybridization probes for pig, chicken, and mouse.

This report forecasts revenue growth at global, regional, and country levels, and provides an analysis of the latest industry trends in each of the sub-segments from 2014 to 2026. For the purpose of this study, Grand View Research has segmented the global Fluorescent In Situ Hybridization (FISH) probe market report on the basis of technology, type, application, end-use, and region: