The global food dehydrators market size was calculated to be USD 1.89 billion in 2018 and is anticipated to register a CAGR of 6.89% from 2019 to 2025. Factors such as increasing demand for longer shelf life of food products along with rising disposable income are expected to drive the market. Moreover, growing food processing industry and awareness regarding food wastage are expected to drive the demand.

One-third of the total food produced around the globe remains unconsumed and goes to waste. Numerous initiatives have been taken by governments and various organizations. These organizations use food dehydrators to preserve unconsumed food, which is then provided to areas suffering from a natural disaster or food shortage. Rising use by restaurant owners to avoid food wastage is also expected to fuel the demand. 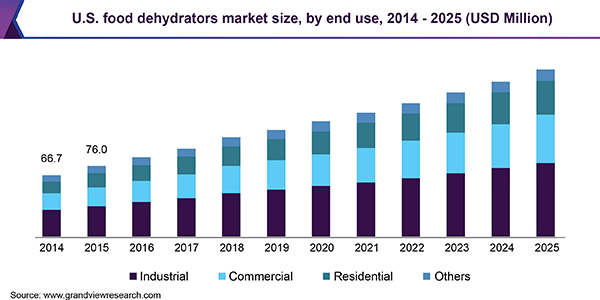 U.S. accounted for the third-largest market share in 2018. The growing food processing industry, coupled with high disposable income, is expected to boost the demand for food dehydrators. Moreover, growing demand for products with long shelf lives are expected to fuel the demand in U.S. High awareness regarding food wastage is expected to further elevate the market over the forecast period.

Food dehydration is one of the best methods to increase the shelf life and preserve food. The food is cut into equal-sized slices and placed on trays. Food dehydrators heat food at a particular temperature to release moisture using a fan. They are widely used by exporting companies for dehydration and transportation of product. This aids in trading as it saves a lot of shelf space and decreases the weight of the food significantly.

The technology used in food dehydrators is constantly evolving owing to produce innovative products and set product benchmarks. The world is experiencing challenges fulfilling basic food demands owing to increasing food wastage. Food is wasted at different levels, including agriculture, distribution, retail stores, and point of consumption. This trend is observed globally and has resulted in an increased demand for products with longer shelf lives.

The National Restaurant Association, a U.S.-based restaurant business association, recorded sales of around USD 590 billion in 2010, which is expected to reach USD 863 billion by the end of 2019. Thus, a rise in the number of foodservice establishments and increasing sales of the restaurant industry in the U.S. are, in turn, likely to benefit the market.

Vertical airflow food dehydrators consist of a fan that is generally located at the bottom of the equipment. Thus, the food gets dehydrated as the air moves from the base towards the top and vice versa. These dehydrators are usually smaller in size and are used for dehydrating food products such as herbs, among others.

In 2018, the horizontal airflow technology segment accounted for a revenue share of 67.7% in the global commercial food dehydrators market. Uniform heat distribution, as well as suitability for a wide range of food products, are some of the factors contributing to their widespread use. These dehydrators are ideal for dehydrating food products such as meat and chicken that requires a substantial amount of heat.

Constant innovation has resulted in food dehydrators using different sources of energy, including electricity, biofuel, and solar, among others. Other energy sources include wind energy, tidal energy, and gas turbines. The electricity segment accounted for the largest market share of 33.5% in 2018 and is expected to dominate in 2025, owing to low costs for set up when compared to set up for solar power.

Solar energy was the second largest segment in 2018 and is expected to witness the highest growth rate during the forecast period owing to increasing investments to tap into renewable sources of energy. Solar-powered equipment is highly adopted globally, and this energy source will benefit remote places where electricity is not easily available. This segment is expected to account for 24.5% market share in 2025.

Biofuel ccounted for 23.0% of the market share in terms of revenue in 2018. Limited food availability and lack of proper drinking water facilities in rural areas where electricity is not regularly or easily available are expected to fuel this energy source segment. It is expected to expand at a significant CAGR of 6.6% during the forecast period. This energy can be produced at homes as well as factories according to the requirement.

The residential segment is expected to witness significant growth over the forecast period owing to high disposable income and increasing awareness regarding food wastage. The economies, including the U.S., Germany, Netherlands, Spain, and China, are expected to further drive the segment growth.

The industrial segment is anticipated to expand at a CAGR of 7.5% from 2019 to 2025. It is expected to be one of the fastest-growing end use segments on account of rapid growth in the food and beverage sector, especially in developing countries, including India and China. Increasing demand for longer shelf life food products from end users is expected to boost the growth. 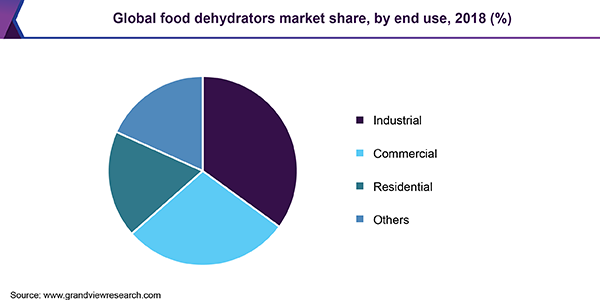 In 2018, the industrial segment held the dominantmarket share of 35.1%. The dehydrated food is easier to export owing to its low weight and reduced size and thus, are widely used by fruits and vegetable exporters. Rising food exports, owing to increasing population, will result in rising demand for industrial food dehydrators. Commercial end use segment accounted for 28.4% market share in 2018.

Europe emerged as the leading regional market and accounted for 35.2% revenue share in 2018. The region is expected to dominate the industry on account of several factors including rapidly growing agriculture and food processing industries. Moreover, increasing demand for food products with longer shelf lives coupled with increasing disposable income is expected to boost the demand for food dehydrators.

Asia Pacific was the second largest market in 2018 and is expected to reach USD 1.11 billion by 2025 owing to increasing awareness regarding food wastage, high agricultural production, and increasing exports of food products especially fruits and vegetables. Rapidly growing food processing industry is expected to further fuel the regional product demand.

Central and South America is anticipated to expand at a significant CAGR of 6.9% over the forecast period owing to high agricultural production and low consumption especially in Brazil and Argentina. Increasing adoption of food preservation techniques, especially solar based food dehydrators is expected to bode well for the growth. A large consumer base and increasing population are expected to further drive the regional market.

Middle East and Africa is expected to witness slower growth owing to huge imports of food products including fruits and vegetables. These products are dehydrated by the exporter and thus reduces the regional demand. Presence of agricultural producing regions including Egypt, Tanzania, and Ethiopia is anticipated to drive the regional market in the forthcoming years.

This report forecasts market share and revenue growth at global, regional, and country levels and provides an analysis of the latest industry trends in each of the sub-segments from 2014 to 2025. For the purpose of this study, Grand View Research has segmented the global food dehydrators market report based on technology, end use, energy source, and region: