The global forensic technology market size was estimated at USD 13.8 billion in 2019 and is anticipated to grow at a CAGR of 12.7% throughout the forecast period. A high upsurge in the number of violent crimes across the globe is a high impact growth rendering driver of the forensic technology market. Intentional homicide, murder, rape, and robbery are the primary reasons propelling the need for forensics, thereby fueling growth. According to the United Nations Office on Drugs and Crime (UNODC), in their last study conducted in 2012, the global average of intentional homicide was reported to be 6.2 per 100,000 people. In addition, amongst all regions, the Americas accounted for the highest rate of intentional homicide followed by Africa and Asia.

Thus, an upsurge in the number of crimes has led to an increase in the number of unresolved cases, which calls for the urgent adoption of advanced technologies to clear the backlog of pending cases. The absence of concrete evidence leads to unresolved cases, which depicts a high need to adopt forensic technologies. According to research published in NCBI, one-third of murders in the U.S. are unresolved and awaiting conviction. 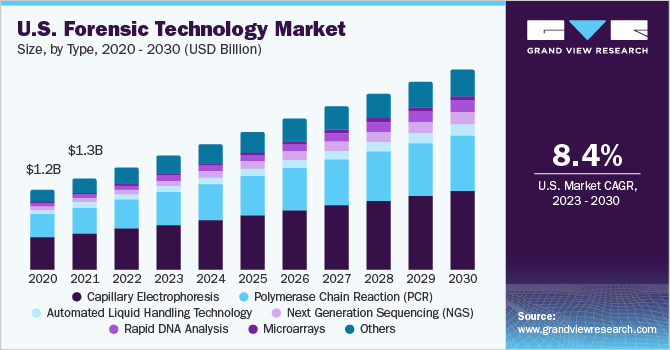 The market is also predominantly driven by increasing investments by various public and private organizations for forensic research. For instance, the Debbie Smith DNA Backlog Grant Program provides funds to local as well as state governments to reduce the backlog of untested and unanalyzed DNA evidence. The primary purposes served by this grant include conducting an analysis of biological samples under applicable legal authority, improving the capacity of the state as well as local laboratories to conduct DNA analyses, and ensure streamlined analysis. In addition, the Katie Sepich Enhanced DNA Collection Act of 2012 amended the Debbie Smith Grant program to assign funds for the fiscal year 2013 to 2015 to meet costs associated with the collection of DNA samples from criminal suspects.

Furthermore, the introduction of the Debbie Smith Reauthorization Act of 2014 extended the authorization of funds until 2019. This amendment will lead to usage of up to 4% of the funds appropriated for the enhancement of capacity & infrastructure of forensic facilities. Thus, such grants are anticipated to improve existing technologies, increase the accuracy & efficiency of DNA analysis, and reduce the time & expenses involved in resolving the case, thereby creating remunerative growth prospects.

Similarly, the advent of Light-weight Analyzer for Buried Remains and Decomposition Odor Recognition (LABRADOR)—a device designed to identify various chemicals released by decaying bodies—is one of the major breakthroughs in this field. Development of such innovative products is anticipated to fuel the market growth over the forecast period.

Increasing strategic initiatives undertaken by market players are also expected to boost the market in the near future. For instance, in April 2022, Bode Technology announced an investment worth USD 2 million for expansion of its forensics operations in Fairfax County, Virginia, U.S. for catering to the rising demand for its offerings. Prior to this expansion, the company had also launched a new forensic genealogy service for crime laboratories and law enforcement investigators, signifying a high potential for market growth in this domain.

Rapid increase in the number of violent crimes globally is expected to boost the forensic technology market. Intentional homicide, rape, murder, and robbery are among the major crimes that are leading to increasing need for DNA forensics. Americas account for the majority of intentional homicide cases, followed by Africa and Asia. A high rate of violent crimes has also led to a rise in the number of unresolved cases, which is driving the urgency to adopt advanced forensic technologies.

Innovations in R&D of forensic science are leading to the introduction of relatively advanced techniques for solving crime and raising the efficiency & reliability of forensic testing. Various government initiatives are being undertaken for achieving sustained progress in research pertaining to forensic science, which is widening the scope for growth of forensic technology market. For instance, the Debbie Smith DNA Backlog Grant Program offers funds to local & state governments for several purposes, including the improvement of the DNA analysis capacity of the state and local laboratories.

The market growth may be hindered due to current regulatory specifications, as per which, forensic agencies are required to adhere to Quality Assurance Standards (QAS), including testing standards for proficiency of forensic laboratories and analysts involved in conducting DNA analyses. It is also mandatory for QAS to specify criteria for proficiency tests applicable to various types of DNA analyses conducted in forensic laboratories.

Capillary electrophoresis held the largest share in 2016. The dominant share of the segment can be attributed to the benefits offered by this technique. These benefits include increased resolution, reduced risk of cross-contamination, online detection, higher speed, minimal consumption of sample, and easy-to-use techniques.

This technique can also quantify and provide rapid profiling of anionic species found in poisons and explosives. Widespread usage of the capillary electrophoresis technique has been observed owing to its ease in preparing samples, simpler detection methods, and microsampling capabilities.

Next-Generation Sequencing (NGS) is expected to grow at a lucrative rate over the coming years. This lucrative growth rate can be attributed to the associated benefits such as its improved ability of human identification in degraded biological samples and enhanced paternity testing.

Chemical analysis captured considerable share in the services segment in 2016. Chemical analysis has a wide array of applications such as toxicology studies, fire debris analysis, bloodstain pattern analysis, serology, alcohol testing, fingerprinting, and analysis of trace evidence, which is presumed to provide an upsurge to the segment.

The increasing preference of forensic experts toward chemical analysis cases of drug abuse is also one of the key growth contributing factors. For instance, a breathalyzer kit is used by most of the state patrol vehicles and police squad cars to identify alcohol intoxication.

DNA profiling is expected to exhibit lucrative growth throughout the forecast period. This growth can be attributed to its wide range of applications in body fluid identification, paternity testing, the examination of drug abuse, and the identification of disaster victims.

Moreover, growing R&D and DNA databases across the globe are predicted to drive the market over the coming years. For instance, the Department of Defense and the U.S. Department of Justice allocated funds of USD 2.5 million to develop advanced technologies that can increase the efficiency of tests.

Judicial/law enforcement captured the largest share in the application segment in 2016. Consistent efforts by government authorities across the globe to create DNA databases are serving as a key growth contributing factor. The DNA Identification Act 1994 in the U.S. provided the FBI authority to develop a national DNA database to assist in solving backlog criminal cases, which has resulted in a significant upsurge in the adoption of forensics in the administration of justice.

Moreover, the growth in judicial applications is also driven by the adoption of a wide array of other techniques that allows lab technicians to gather information from DNA samples at reduced costs and time. For instance, with the help of technologically advanced techniques, it is possible to generate DNA profiles within 90 minutes from swabs.

Biodefense & bio-surveillance is anticipated to grow at a constant CAGR over the coming years. Sudden disease outbreaks caused by naturally occurring pathogens are responsible for over 15.0 million deaths every year, which exerts a huge impact on the global economy, thereby presenting an attractive market opportunity. Furthermore, increasing the risk of terrorism through bioweapons is anticipated to fuel the segment growth.

Laboratory forensic technology accounted for the largest share of the location segment in 2016. This can be attributed to the presence of testing instruments, which are bulky in nature and designed for the testing of a large volume of samples.

In addition, the adoption of laboratory equipment by forensic experts is higher as they are relatively cheaper. Various regulations have been established to ensure a high quality of forensic laboratories for achieving results with higher accuracy, which is anticipated to provide a significant boost to the market.

The portable technology segment is predicted to grow at an exponential CAGR during the forecast period. The introduction of portable& handheld devices allows on-site operation and is largely used in the detection of alcohol and drug intoxication, especially in case of road accidents. Moreover, such portable testing devices are expected to reduce the backlog of pending criminal cases in laboratories.

North America accounted for the largest share of about 35.54% in 2021 due to the increasing incidence of violent crimes and resultant rise in forensic analyses in the region. Furthermore, private organizations and law enforcement agencies are driving the adoption of forensic services in a variety of sectors, including healthcare. Similarly, the development of advanced healthcare infrastructure and sophisticated forensic techniques has increased the efficiency of forensic analysis conducted in the region and is anticipated to boost the market. 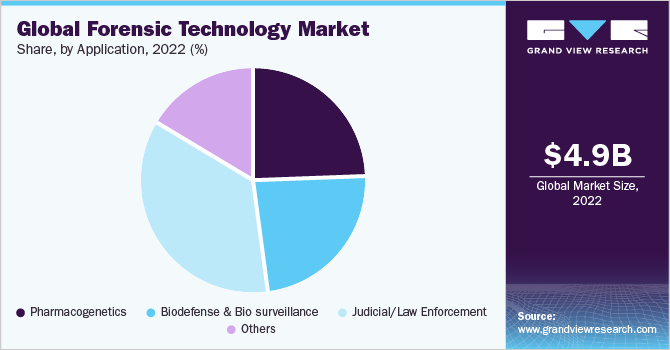 Japan held the largest share in the Asia Pacific region in 2021. Its dominant share can be attributed to major market players consistently focusing on promoting their products for various applications. For instance, Shimadzu, a major provider of mass spectrometers, is promoting its products for investigation of drug toxicity. In collaboration with Nagoya University Hospital, the company developed a database of 68 compounds responsible for poisonings caused by contamination of intravenous drips by disinfectants.

The key players are extensively deploying strategies to sustain a highly competitive environment. Agilent Technologies, Thermo Fisher Scientific, SPEX Forensics, and LGC Limited are some of the key players. These companies usually employ strategies such as mergers & acquisitions, new product development initiatives, and geographical expansion to increase their share and sustain the competition.

For instance, in March 2017, Agilent Technologies launched a research-grade Triple Quadrupole LC/MS System. This product launch was undertaken to expand their offerings and venture into various research applications such as forensic toxicology, environmental testing, clinical research, and peptide quantitation.

This report forecasts revenue growth at global, regional & country levels and provides an analysis of the industry trends in each of the sub-segments from 2014 to 2025. For the purpose of this study, Grand View Research has segmented the global forensic technology market: