The global frozen dessert market size was valued at USD 93.7 billion in 2018 and is expected to expand at a CAGR of 5.4% over the forecast period. Increasing demand for frozen dessert products across the globe owing to change in consumer tastes and health consciousness is one of the major reasons for the market growth. Moreover, increasing disposable income, along with the introduction of various products in the dessert segment to cater to the choices of a vast group of consumers, is driving the market. 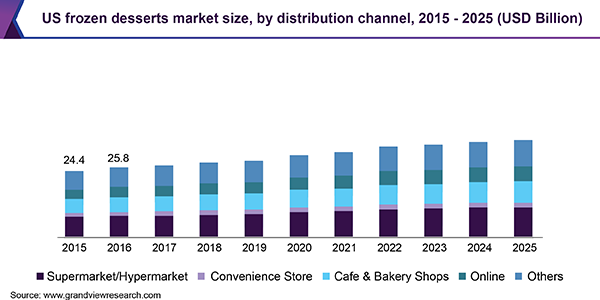 Frozen desserts are mainly made up of milk compounds, vegetable fats, along with a mixture of flavors and dry fruits. The growing trend of consuming frozen dessert after a meal as an effective digestive product is boosting the growth of the dessert market. Climate change is another factor likely to create high demand for frozen desserts such as ice cream and frozen yogurt on a global scale. It is estimated that the demand for ice creams alone can easily go up to 50% on a hot day and drop 20% if the weather is bad. Customers believe that they eat ice creams just to cool down their body temperature in a hot climate, thereby fueling the growth of the market.

Increasing health concerns among people are hampering the growth of this market. The majority of the consumers prefer low-calorie options, vegan alternatives, and dairy-free products as a healthier option, hence affecting the market growth. As per the WHO, more than 400 million people in the world are living with diabetes, which will increase to more than 600 million people in the next 2 decades. An increasing number of diabetic patients has put extreme pressure on the dessert industry to develop sugar-free products suitable for the concerned class of consumers.

Moreover, various companies are looking to expand their product portfolio in this segment due to the increasing popularity of frozen dessert in the market. For instance, Coca-Cola, a carbonated beverage giant, expanded its business with the introduction of frozen desserts in India. The company also announced that it will invest â‚¹ 11,000 crores in creating an agriculture-focused ecosystem and food processing units and sourcing that will help it to introduce a variety of fruit-based products and desserts in the market.

On the basis of distribution channel, the market has been segmented into supermarket/hypermarket, convenience stores, café and bakery shops, and online. The supermarket/hypermarket segment held the largest market share in 2018. It is expected to emerge as the fastest-growing segment over the forecast period owing to the purchase of frozen desserts, along with the daily grocery items, which is attributed to steadily increasing demand for desserts in daily food elements.

The growing trend of purchasing products from specialized stores has resulted in the opening of various cafes and bakery shops for frozen dessert products. Recent trends have compelled them to adapt nutritious desserts in their menus, which has further enhanced their product offerings. Moreover, a number of online delivery partners are coming up with innovative solutions to deliver frozen desserts at respective locations as fresh as their source points. This has resulted in an increase in the online buying of frozen desserts.

By product, the market is divided as confectionary and candies, ice cream, and frozen yogurt. Ice cream is one of the major products in this market and the segment accounted for the largest market share of 58.1% in the year 2018. The demand for ice cream is increasing on a large scale due to its growing popularity among all generations. 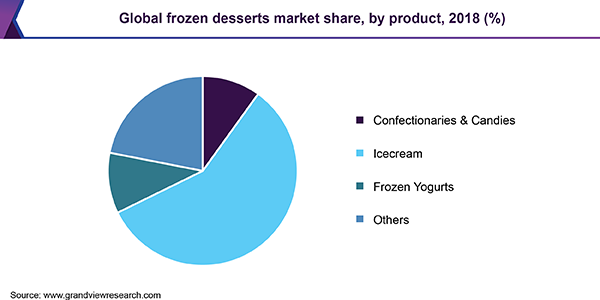 Various other factors fueling the growth of ice creams are flavors, shape, fat contents, along with texture and sweetness. Sugar-free ice creams, along with handcrafted ones, are gaining huge popularity due to their health benefits. While taste and nutrition are important to the consumers of ice cream, the price, brand, and ambiance play an important role in this market. According to a survey, 36% of Brazilians reportedly buy cheaper ice creams, and hence they prefer private label ice creams.

Frozen yogurt is anticipated to witness the fastest growth over the forecast period owing to several health benefits associated with the product. It is a frozen dessert made with yogurt and sometimes other dairy and non-dairy products. Frozen yogurt often competes with ice cream, and is typically considered to be a healthier alternative. This is compelling the consumers to switch from ice cream to frozen yogurt, thereby making it the fastest-growing product.

North America was the largest regional market in the year 2018 owing to the growing demand for ice creams in the region. In 2018, the U.S. was the largest market accounting for 91.6% share in the North America market. Changing lifestyle, along with increasing health consciousness, is boosting the growth of this market.

Frozen yogurt is the most popular product under this segment having more than 400 brands that offer numerous flavors to consumers. Considering this, the United States Department of Agriculture (USDA) has initiated several projects to promote the consumption of yogurt and related products across the region. Low-fat yogurt is a great source of calcium and is increasingly promoted by the organization for health and nutrition.

Asia Pacific is expected to emerge as the fastest-growing regional market in the forecast period. Growing urban population, changing lifestyles, rising disposable income, and changing weather conditions are some of the major factors driving the market in this region.

Some of the key players in this market are Nestle, Unilever, General Mills, Van’s Foods, and Kellogg Company. Other prominent players are China Mengniu Dairy, Handles, Bassetts Ice cream, and Dairy Queen. High to moderate entry barriers, as a result of the presence of various brands and rapid innovation in the product line, are anticipated to assert high competition among major manufacturers.

Increasing demand for organic products due to health benefits such as low-fat content and low sugar concentration is increasing competition among various players in the market. Due to a relatively fragmented competitive landscape, innovation and new product development are of key importance in order to retain the interest of consumers. As a result, the key players are continuously introducing various new products at the end of the review period. For instance, U.S.-based low-calorie ice cream brand Halo Top played a key role in the explosion of craft ice creams in the market, which is subsequently influencing the market growth of big giants such as Unilever and General Mills.

This report forecasts revenue growth at the global, regional, and country levels and provides an analysis of the latest industry trends in each of the sub-segments from 2015 to 2025. For the purpose of this study, Grand View Research has segmented the global frozen dessert market report on the basis of product, distribution channel, and region:

How big is the frozen dessert market?

What is the frozen dessert market growth?

Which segment accounted for the largest frozen dessert market share?

b. North America dominated the frozen dessert market with a share of 31.7% in 2019. This is attributed to high popularity of frozen yogurt among consumers as it has market presence through 400 brands in the U.S., which offer numerous flavors to consumers.

Who are the key players in frozen dessert market?

What are the factors driving the frozen dessert market?

b. Key factors that are driving the market growth include change in consumer tastes, increasing health consciousness,rising disposable income, and introduction of various products in the dessert segment.