The global fusion biopsy market size was valued at USD 494.2 million in 2019 and is expected to grow at a compound annual growth rate (CAGR) of 10.3% from 2020 to 2027. The increasing prevalence of prostate cancer, rising acceptance of multiparametric MRI in prostate cancer care, and high specificity of fusion biopsy are the factors anticipated to drive the demand of targeted MR/Ultrasound biopsy system over the forecast period. According to various studies, the success rate of prostate biopsy using the traditional 12 core biopsy approach is 33%, whereas using MR/US fusion biopsy the success rate is 58-70%. Thereby, fusion biopsy eliminates the need for a repeat biopsy, reducing additional healthcare costs and patient discomfort. 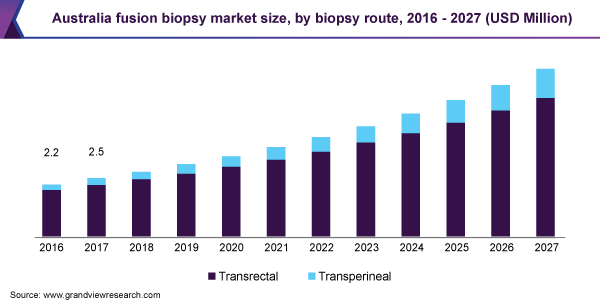 Prostate cancer is the second most common type of cancer in men, over 160,000 Americans are diagnosed each year of prostate cancer annually. The preliminary diagnostic test for prostate cancer includes Prostate Specific Antigen (PSA) and Digital Rectal Examination (DRE) owing to its affordability and accessibility. However, the PSA test is mainly used in detecting benign tumors leading to unnecessary invasive procedures and healthcare costs. Therefore, the growing demand for a highly specific and sensitive screening tool in prostate cancer is expected to spur the growth of the market for fusion biopsy.

The survival rate of prostate cancer is better in comparison to other types of cancer. However, the survival rate for the same is imparted at the metastatic stage of cancer. To prevent prostate cancer leading to a metastatic stage, either surgical intervention or active surveillance with medication is required. The risk with surgical intervention includes erectile dysfunction, urinary tract infection, bleeding, and urinary incontinence. Therefore, patients generally seek active surveillance with regular biopsy, which in turn, is expected to propel the growth of targeted MR/Ultrasound biopsy system market.

The increasing number of government initiatives in terms of funding research, spreading awareness, and conducting mass screening programs related to prostate cancer are expected to play a crucial role in the growth of the market for fusion biopsy. For instance, the U.S. federal government invests millions of dollars each year in prostate cancer research through the National Institute of Health (NIH) and the Prostate Cancer Research Program (PCRP). The investment is made to develop advanced diagnostic and treatment technologies in prostate cancer care.

The transrectal segment accounted for the largest revenue share of 86.9% in 2019, as it is the gold standard in performing prostate biopsy worldwide over the decades. Additionally, most of the commercially available fusion biopsy is limited to the transrectal approach, thus, contributing to its largest market share. However, patient reporting with fever, sepsis, hematuria, and rectal bleeding after transrectal fusion biopsy is expected to impact the segment growth during the forecast period.

Transperineal fusion biopsy is an emerging trend and is expected to experience the fastest CAGR of 14.1% during the forecast period. Lower risk of infection and rectal bleeding in comparison to the traditional approach is expected to contribute towards the segment growth. Moreover, the transperineal approach is efficient in assessing the ventral prostate areas that are typically omitted with transrectal fusion biopsy. The market players such as Koelis and Biopsee are offering both transrectal and transperineal accessories with their fusion biopsy system giving urologist the flexibility of providing personalized patient care.

The hospital segment accounted for the largest revenue share of 60.7% in 2019. The factors such as the large patient pool, high financial capabilities, presence of advanced MRI equipment, and availability of skilled professionals are expected to contribute to its largest market share. Additionally, the growing acceptance of DICOM, PACS, and teleradiology practice in the hospital sector is also expected to fuel the growth of the targeted MR/Ultrasound biopsy systems market. 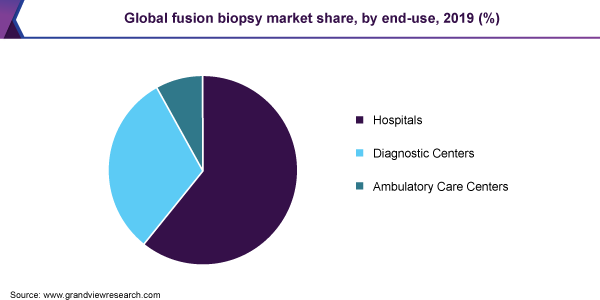 Diagnostics centers are expected to grow at a significant rate over the forecast period. Shorter wait times, cost efficiency, and developing reimbursement paradigm are the factors expected to drive the growth of this segment. As the targeted MR/Ultrasound biopsy system is an emerging technology, the high cost is a major barrier for its implementation in diagnostic centers. However, it is observed that two diagnostic centers partnering to purchase an MR/Ultrasound fusion biopsy system, contemplating its quick ROI and surging demand for fusion biopsy.

Ambulatory care centers are expected to grow at the fastest rate of 11.3% during the forecast period. The rising prevalence of prostate cancer in rural areas having limited access to healthcare service is the factor expected to drive the growth of the segment. Moreover, the introduction of highly portable and low-cost MRI is expected to enhance the adoption rate of targeted MR/Ultrasound biopsy in ambulatory care centers, thus, expected to boost the overall market growth.

North America accounted for the largest revenue share of 50.7% in the fusion biopsy market in 2019 and is expected to continue its dominance over the forecast period. The presence of a streamlined reimbursement framework, rising incidence of prostate cancer, and increasing R&D expenditure related to prostate cancer care have contributed to its largest market share. According to the Population Reference Bureau, in 2018, 24% of the total men population in the U.S were aged 65 years and older, and this number is projected to rise to 26% by 2060. As aging is one of the major risk factors leading to prostate cancer, thus, rising geriatric population is expected to boost the growth of the market for fusion biopsy in North America.

Europe held a significant share in the market for fusion biopsy and is expected to grow at the fastest rate during the forecast period. The presence of major market players such as Hitachi, Philips, Koelis, Esaote, and MedComand availability of cost-effective fusion biopsy system by these market players, is expected to propel the market growth. Additionally, the increasing number of international trade conferences and congress held related to urology and interventional radiology in Europe has also improved the accessibility to advanced prostate imaging solutions.

Asia Pacific is anticipated to witness a CAGR of 10.5% during the forecast. The growing awareness among urologists about the sensitivity and specificity of targeted MR/Ultrasound biopsy in performing a prostate biopsy is expected to drive the market. Moreover, the increasing participation of the private sector in healthcare especially in countries such as India, China, and Japan possessing high purchasing capabilities is also expected to positively impact the market for fusion biopsy.

Key companies are stressing on R&D to develop advanced software and hardware solutions to streamline the workflow of MRI/US fusion targeted biopsy. For instance, in November 2018, Koninklijke Philips N.V. receives 510k clearance for its MRI/US fusion biopsy system called “UroNav Version 3.0”. The device was the upgraded version of its already exiting fusion biopsy system “UroNav Version 2.0”. The new version had additional software and hardware accessories to perform a transperineal fusion biopsy. The market players are adopting various strategies such as mergers and acquisitions, product launches, collaborations, reinforcing distribution networks, and entering untapped markets especially developing economies to strengthen their market presence. For instance, in June 2018, Biopsee together with Hitachi wins the contract to supply 6 prostate fusion biopsy system at three major hospitals across London and the U.K. Some of the prominent players in the fusion biopsy market include:

This report forecasts revenue growth at global, regional, and country levels and provides an analysis of the latest industry trends in each of the sub-segments from 2016 to 2027. For the purpose of this study, Grand View Research has segmented the global fusion biopsy market report on the basis of biopsy route, end-use, and region:

How big is the fusion biopsy market?

What is the fusion biopsy market growth?

Which segment accounted for the largest fusion biopsy market share?

b. North America dominated the fusion biopsy market with a share of 50.72% in 2019. This is attributable to the rising prevalence of prostate cancer in the U.S. and Canada, the presence of a large installed base of fusion biopsy units, increasing research activities related to prostate cancer treatment, and the presence of effective screening programs.

Who are the key players in the fusion biopsy market?

What are the factors driving the fusion biopsy market?

b. Key factors that are driving the fusion biopsy market growth include the growing demand for targeted biopsy, the development of efficient reimbursement policies in several countries, and the launch of intuitive and attractive fusion biopsy software systems.