The global prostate cancer diagnostics market size was valued at USD 2.83 billion in 2019 and is anticipated to expand at a CAGR of 13.2% during the forecast period. Increasing prevalence of prostate cancer is one of the major factors propelling the demand for diagnostic products. According to the National Cancer Institute, in the U.S., approximately 174,650 new cases were diagnosed in 2019. 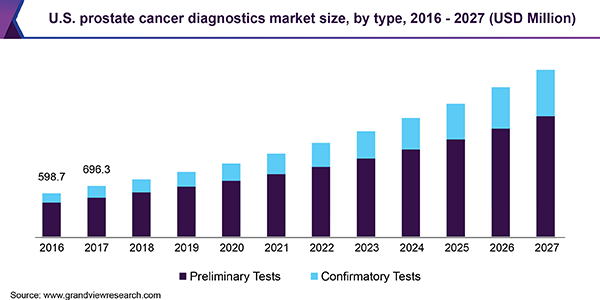 Technological advancements in diagnostic tests are expected to further fuel market growth during the forecast period. According to the National Cancer Institute, researchers are currently testing the use of Artificial Intelligence (AI) to diagnose prostate cancer. AI tools are used for identifying suspicious areas seen during a Magnetic Resonance Imaging (MRI) scan that require biopsies to confirm the presence of malignant cells. Artificial intelligence tools are also being tested in order to improve biopsy sample analysis facilitated to provide more efficient and accurate results.

Rise in government initiatives to develop new technologies to enhance diagnosis is expected to impact the market positively. For instance, the National Cancer Institute initiated Prostate Specialized Programs of Research Excellence (SPORE)-a program designed to convert scientific findings into clinical settings based outcomes. The institute also facilitates the development of new technologies and studies to gain a better understanding of monitoring, prevention, diagnosis, and treatment.

The rising number of new market entrants is another factor anticipated to fuel the growth of the prostate cancer diagnostics market in near future. For instance, in July 2018, Gregor Diagnostics, invested USD 9,00,000 to support its efforts to develop a novel at-home screening test. This device is expected to facilitate highly sensitive test results in comparison to common PSA tests. Thus, increasing investment by new entrants is expected to drive the growth significantly. However, the high cost of the tests is anticipated to hinder growth.

Preliminary test segment is expected to hold the largest market share over the forecast period, owing to a rise in prevalence of prostate cancer. According to the American Institute for Cancer Research, easy availability of PSA screening has facilitated early diagnosis and treatment, increasing survival rates. PSA tests detect unrecognized and small tumors that may or may not develop into an advanced stage of cancer. As these tests facilitate detection before major symptoms appear, they are recommended to most men over the age of 50 and those at risk of developing the disease.

Rise in product approvals by the Food and Drug Administration (FDA) is anticipated to boost market growth during the forecast period. For instance, in October 2019, Cleveland Diagnostics Inc. received FDA Breakthrough Device Designation for its product IsoPSA Assay, a novel non-invasive blood based diagnostic assay for the detection of the disease. 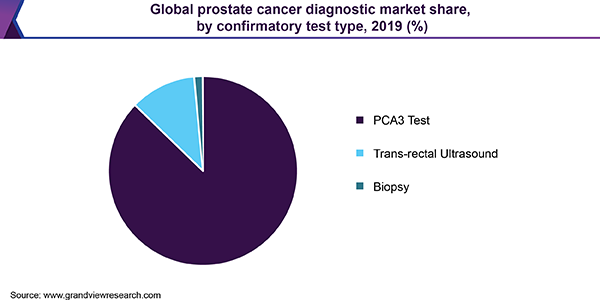 Other preliminary tests include the Digital Rectal Exam (DRE) and biomarker tests. DRE tests are used for detecting hard, lumpy as well as the abnormal growth of the prostate gland. Since these tests depend on the skills and abilities of the technician, the results obtained are not accurate and, in most instances, require further tests such as PSA and biopsy. Biomarkers aid in distinguishing between significant and insignificant cancers and the identification of aggressive cancers among men undergoing surgery. These facts are indicative of the rising awareness among general population, facilitating early detection and treatment, propelling the market growth.

Confirmatory tests include PCA3 test, Transrectal Ultrasound (TRUS), and biopsy. Post preliminary testing, if results of PSA and DRE are abnormal, patients are required to undergo confirmatory tests for further diagnosis. With rising disease prevalence, there has been an increase in the usage of confirmatory tests, which is anticipated to boost the market.

North America held the largest market share in 2019, owing to high prevalence of the disease and the rise in government initiatives to facilitate early diagnosis. For instance, the National Cancer Institute has implemented several programs to enhance research efforts for early detection and treatment. Some of their programs include Cancer Biomarkers Research Group that promotes research on biomarkers. Similarly, the institute also manages the Early Detection Research Network (EDRN), a collaborative network of privately funded and governmental researchers engaged in the discovery and validation of biomarkers for cancer diagnosis.

Also, a rise in disease prevalence in North America is expected to fuel the demand for prostate cancer diagnostics during the forecast period. According to the American Institute for Cancer Research, prostate cancer is considered as the second most commonly occurring cancer in men in the U.S. Over 1.3 million prostate cancer cases were diagnosed in the year 2018 in the U.S. Thus, the rising incidence is anticipated to fuel market growth in the near future.

In Europe, increasing initiatives to create awareness is expected to fuel market growth. In 2019, the European Association of Urology initiated European Prostate Cancer Awareness program to raise awareness regarding early detection. The awareness program covered topics, such as over-diagnosis, over-treatment, and consequences of late detection. In addition, the rising prevalence in Europe is anticipated to drive demand. According to the European Association of Urology, over 2 million men in Europe were diagnosed with prostate cancer in 2018 with approximately 92,000 deaths as a result, each year. The yearly costs incurred due to the disease accounts to USD 10.6 billion indicative of the rising prevalence.

According to the National Institute of Health, disease epidemiology in the Asian countries is rising owing to changes in lifestyle such as a rise in consumption of westernized diets and lack of physical activity. Additionally, as per the data from the International Agency for Cancer Research, over 297,215 individuals were diagnosed with prostate cancer in Asia in 2018. Rising prevalence is thus anticipated to further necessitate demand for diagnostic products, facilitating high regional growth in the forthcoming years.

For instance, in 2017, Roche launched a new cancer biomarker, the rabbit monoclonal primary antibody anti-p504s (SP116) for the disease diagnosis. The biomarker is used for detecting α-methylacyl-CoA racemase in tissue sections, enabling easy identification of morphologically different samples such as cancerous, benign, and atypical from a single slide. In June 2018, MDxHealth announced an agreement with Philips for the rights to manufacture and commercialize Philips’ prognostic biomarker phosphodiesterase-4D7 phosphodiesterase-4D7 as a prognostic test for the diagnosis. This agreement is intended to aid MDxHealth to prepare for the launch of InformMDx test commercially. In February 2018, Genomic Health Inc. launched Oncotype DX AR-V7 Nucleus Detect liquid biopsy test in U.S.

This report forecasts revenue growth at global, regional, and country levels and provides an analysis of the latest industry trends in each of the sub-segments from 2016 to 2027. For the purpose of this study, Grand View Research has segmented the global prostate cancer diagnostics market report on the basis of test type and region:

How big is the prostate cancer diagnostics market?

b. The global prostate cancer diagnostics market size was estimated at USD 2.83 billion in 2019 and is expected to reach USD 3.32 billion in 2020.

What is the prostate cancer diagnostics market growth?

b. Preliminary tests dominated the prostate cancer diagnostics market with a share of 76.8% in 2019. This is attributable to the easy availability of PSA screening which has facilitated early diagnosis and treatment, increasing survival rates, thereby driving growth.

Who are the key players in prostate cancer diagnostics market?

What are the factors driving the prostate cancer diagnostics market?

b. Key factors that are driving the market growth include increasing prevalence of prostate cancer, technological advancements in diagnostic tests, and the use of Artificial Intelligence (AI) to diagnose prostate cancer.