The global general surgery devices market size was valued at USD 14.75 billion in 2021 and is expected to grow at a CAGR of 8.29% from 2022 to 2030. Increasing awareness levels among patients and high incidence of cardiac diseases, gastrointestinal diseases, and the prevalence of osteoporosis would increase the number of surgeries performed during the forecast period. Adding to that, technological development and the adoption of advanced surgeries by emerging countries are likely to drive the industry. The robotic and computer-assisted sector has been in its infancy and is steadily gaining traction. Presently, robotics has applications in various general surgeries, such as cholecystectomy, fundoplication, and Heller Myotomy. 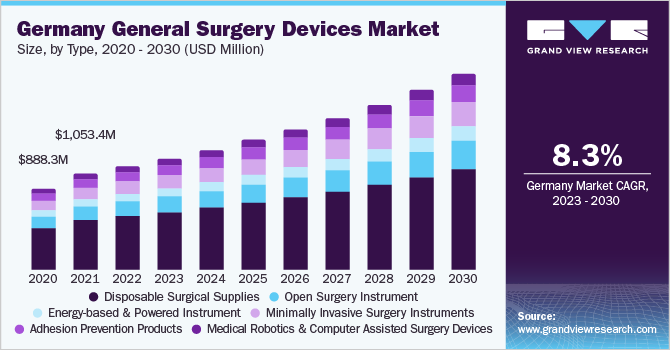 Furthermore, increasing acceptance of minimally invasive and robotic & computer-assisted surgery is likely to drive the industry. For instance, around 310 million major surgeries are carried out every year throughout the world, according to the article "Trauma of Major Surgery" published in the National Center for Biotechnology Information (NCBI) in July 2020. Almost 30 million kids and teenagers participate in youth sports nationwide each year, according to Weinstein Legal research that was released in March 2020. This may result in surgical emergencies, which will further increase the demand for general surgery devices.

Health disorders affecting the worldwide population are transitioning from conditions brought on by infections and plagues to diseases related to lifestyle, as a result of industrialization and significant lifestyle changes. In developed, developing, and less developed countries, the condition has contributed to a marked increase in health conditions, such as cardiovascular diseases, cancers, cerebrovascular diseases, and bone abnormalities. With an increased number of vehicles and other highly advanced gadgets on the road, the number of casualties caused by accidents has also increased. These trends are anticipated to continue, resulting in a sharp increase in demand for general surgeries in the near future.

The circumstance is also anticipated to cause a significant rise in the demand for general surgical equipment globally. A significant number of small and major general surgery device manufacturing companies have entered the global industry due to their great growth potential. Moreover, new companies are constantly entering the market. The rising geriatric population, the introduction of RFID and blockchain technologies, rising demand from emerging nations, high awareness levels about surgical facilities, and growing health burden are also among the key growth-driving factors for the global industry. The adoption of portable surgical instruments is becoming more widespread.

To be able to treat their patients safely and effectively during the COVID-19 pandemic, surgeons implemented and abided by stringent rules that were specific to each specialty. Due to the regulatory authorities' strict instructions to postpone/cancel any non-emergent surgery, the number of surgeries dramatically decreased during the pandemic. Global general surgery admissions have decreased by 42.8%, according to a report that appeared in the National Institutes of Health in October 2021 and was titled "The impact of COVID-19 on emergency general surgery admissions and operative volumes: A single-center experience." As a result, the market for general surgical instruments has been considerably affected by COVID-19.

On the basis of types, the global industry has been further segmented into disposable surgical supplies, open surgery instruments, energy-based & powered instruments, minimally invasive surgery instruments, adhesion prevention products, and medical robotics & computer-assisted surgery devices. The disposable surgical supplies segment dominated the global industry in 2021 and accounted for the largest share of more than 51.70% of the overall revenue. The growth of the segment can be attributed to the high demand for disposable supplies, such as needles, syringes, and catheters. Furthermore, increasing awareness levels about diseases transmitted through surgical devices coupled with government regulations ensuring safety in surgical procedures are likely to augment demand for disposable products. 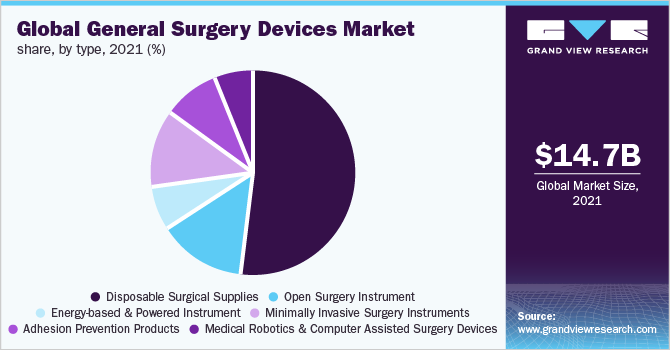 On the basis of applications, the global industry has been further segmented into orthopedic surgery, cardiology, ophthalmology, wound care, audiology, thoracic surgery, urology and gynecology surgery, plastic surgery, neurosurgery, and others. The orthopedic surgery segment dominated the market in 2021 and accounted for the maximum share of more than 17.40% of the overall revenue. The segment will maintain its dominance throughout the forecast period due to the rising cases of bone diseases and the growing geriatric population across the globe. Product innovations, favorable reimbursement, and improving diagnosis methods & imaging technology in orthopedic surgery are also likely to drive the segment.

The cardiology segment is estimated to account for the second-largest share by 2030 owing to the rising cases of cardiovascular disorders. According to the WHO, 17.9 million deaths worldwide in 2019 were attributable to CVDs, or 32% of all fatalities. Heart attack and stroke deaths accounted for 85% of these fatalities. Furthermore, instances of heart attacks were high in 2021 due to genetics and lifestyle changes contributing to a variety of issues, including hypertension, cholesterol, diabetes, and obesity, which can result in fatal heart attacks, cardiac arrests, and strokes. During these uncertain times, people have also faced a great deal of stress. Excessive stress, insufficient sleep, excessive alcohol, and drug intake, smoking, consumption of cheap supplements, and over-exercising are some of the factors that lead to fatal diseases.

Based on end-uses, the global industry has been further classified into hospitals, Ambulatory Surgical Centers (ASCs), and specialty clinics. In 2021, the hospitals segment dominated the global industry and accounted for the maximum share of more than 58.85% of the overall revenue. A report indicates that the majority of hospitals and healthcare facilities are in Asia Pacific, which is fueling industry expansion. In addition, rising healthcare costs in developed and developing nations may lead to an increase in the number of hospitals, which is predicted to boost the demand for general surgical instruments and fuel segment growth.

The ASCs segment is expected to register the fastest growth rate during the forecast period. Growing public awareness about one-day procedures is a key driver of the segment’s expansion. People in many regions are preferring ASCs as they are less expensive than hospitals for treatment due to the rising expense of medical operations. People are being driven to seek medical care at ASCs due to the growing usage of cutting-edge surgical equipment in ASCs. The segment will also be driven by an increasing number of types of procedures with the potential for reimbursement. These factors are anticipated to encourage the use of general surgical devices in ASCs, accelerating the segment's growth over the forecast period.

North America dominated the global industry in 2021 and accounted for the largest share of more than 39.90% of the overall revenue. The region is expected to maintain its leading position throughout the forecast period. Major factors contributing to the region’s growth include favorable reimbursement policies, the presence of key market players, and government initiatives that provide access to advanced devices for general surgery & training sessions for physicians. In 2015, Global Surgery Initiative (GSI) was launched by the Department of Surgery at Massachusetts General Hospital to help establish international partnerships and enhance medical technology for conducting surgeries efficiently. 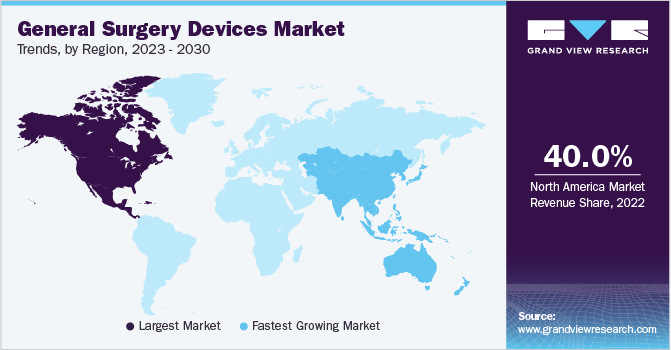 The Asia Pacific region, on the other hand, is anticipated to register the fastest growth rate during the forecast period. The rapid growth can be attributed to the rising investments in the region. Japan, China, India, Australia, and Singapore are the major countries contributing to the market growth in the Asia Pacific region. In addition, various initiatives by the regional governments to incorporate improvements in reimbursement policies and growing awareness about reconstructive or plastic surgeries are anticipated to support the region’s growth during the forecast period.

Due to the presence of significant opportunities in developing countries, players are undertaking strategic initiatives, such as product development, geographical expansion, launches, mergers, and acquisitions, to increase industry share. Olympus introduced POWER SEAL enhanced bipolar surgical energy devices in September 2021 to expand its surgical offering. In February 2021, a New Delhi-based company, SS Innovations, declared that it would commercially release India's first general robotic surgery equipment in the following 4-6 months. In addition, in February 2017, Medrobotics Corp. received funding of USD 20 million for expanding in novel surgical applications and for developing the next-generation Flex Robotic System. Some of the prominent players in the global general surgery devices market include:

This report forecasts revenue growth at global, regional, and country levels and provides an analysis of the latest industry trends in each of the sub-segments from 2017 to 2030. For the purpose of this study, Grand View Research has segmented the global general surgery devices market report on the basis of type, application, end-use, and region: 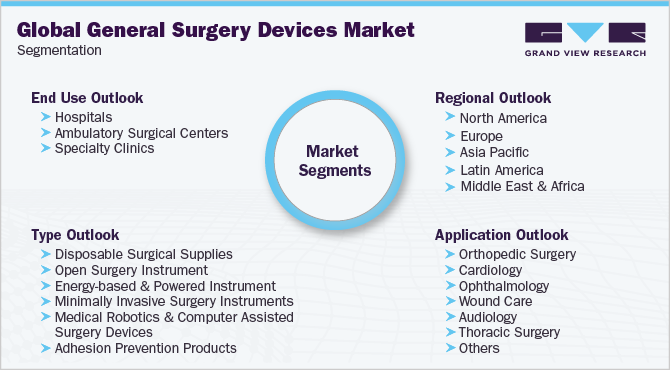 What is the general surgery devices market growth?

b. North America dominated the general surgery devices market with a share of 39.93% in 2021 This is attributable to favorable reimbursement policies, the presence of key companies, and supportive government initiatives.

Who are the key players in general surgery devices market?

What are the factors driving the general surgery devices market?

b. Key factors that are driving the market growth include technological advancements, an increase in surgical procedures, and an increase in government initiatives across the world.

How big is the general surgery devices market?