The global andalusite market size was USD 171.5 million in 2018 and is anticipated to exhibit a revenue-based CAGR of 7.3% from 2019 to 2025. Increasing demand for refractories in the steel industry is expected to remain a key driving factor over the forecast period, as andalusite is mostly used in refractory production.

The phenomenal properties of andalusite such as volume stability, high thermal shock, low porosity, and chemical and creep resistance along with the high level of purity, make it suitable for use in the manufacturing of refractories. Refractories are largely used in blast furnaces during the production of steel owing to properties such as the ability to withstand high temperature and thermal conductivity. 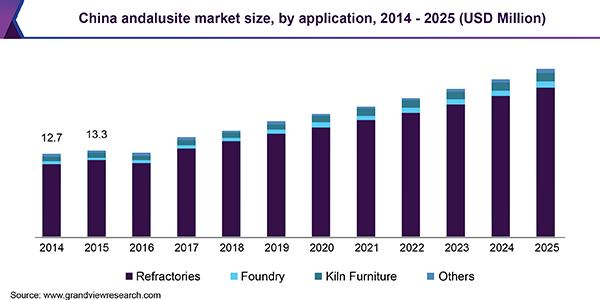 Growing demand for steel in various end-use industries such as construction is anticipated to increase the utilization of refractories. The growth in the construction industry owing to the increasing population and rapid urbanization is likely to propel global steel consumption, which is anticipated to augment refractory production over the forecast period.

Rising demand for cast metal products from the automotive industry is expected to augment the foundry industry growth which, in turn, will propel the market as it is an important component in foundry sand. According to the Foundry Informatics Centre, the global casting production increased by nearly 5.3% from 2017 to 2018, which is likely to augment the demand for andalusite over the coming years.

The market growth is anticipated to be hindered by the supply-demand imbalance. Andalusite’s production is limited as commercial deposits are concentrated in South Africa, France, and Peru, which is insufficient in meeting the consumer demand. The heavy rainfall in 2017 in South Africa and Peru caused a decline in production and hence supply deficit was reported, thereby leading to a price surge in the andalusite market. These factors can result in the consumers switching to alternatives such as bauxite owing to abundant availability, thus hampering the market growth.

Refractory was the largest segment in 2018 with a market revenue share of 87.0% Andalusite is used in the linings of kilns and boilers to protect equipment from high temperatures. Refractory products provide resistance against corrosion, abrasion, and any other attack.

Refractory materials form a significant portion of the overall manufacturing segment as finished products of the refractory market are used in various industries including construction and automotive. For example, the manufacturing of a car weighing 1.3 tons can require up to 10 kilograms of refractories in the form of bricks and mixes. Hence, the increasing production of vehicles is anticipated to augment the demand for products such as steel, glass, aluminum, copper, and plastics, which, in turn, is expected to propel the demand for refractories.

Andalusite as foundry sand is suitable for the production of patterns, molds, and cores. Considering its anti-veining properties such as low thermal expansion, heat resistance, and high refractoriness, it is preferred for the heavy casting of iron and steel alloys. Besides, it also helps in minimizing issues related to sand sintering, sand-washing, and metal penetration.

The kiln furniture segment is anticipated to witness a CAGR of 4.3% in terms of volume over the coming years owing to the growing demand from ceramics and automotive industries. Andalusite shapes are used in making kiln furniture, such as saggars and shelves that are used in investment castings, thermal processing, and glass. A benefit of using andalusite over other minerals is, it can be used in raw form, while certain minerals such as kyanite need to be calcined for high-temperature applications.

Europe was the largest segment in 2018 accounting for a revenue share of 67.3%, owing to the growth in the construction industry in which refractories are used in producing cement. In October 2018, the European Commission announced to invest USD 773 million in developing 49 key projects in transportation infrastructure in the region. This is expected to drive the demand for refractories which, in turn, is anticipated to augment the market growth over the coming years.

The Asia Pacific market is dominated by China owing to the increasing production of refractories. It produced nearly 23 million tons of refractories in 2017, which are majorly consumed by the steel industry. The growing demand for steel in the country is anticipated to augment market growth over the coming years. The demand for andalusite in the country is also from the foundry industry. In 2018, China increased its foundry casting production by 2 million tons to reach a total production of 49.4 million tons owing to the growing demand from the manufacturing sector. 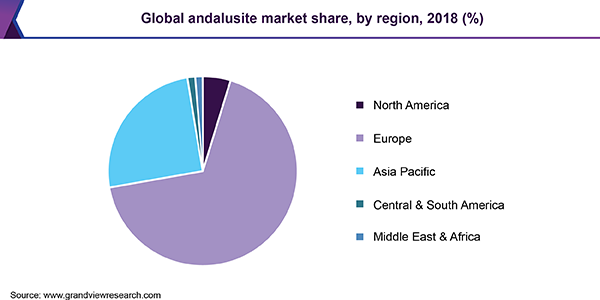 In North America, the market is driven by the growing steel and foundry industries. Positive development in the production of lightweight vehicles in Mexico and high investments by original equipment manufacturers (OEMs) in the U.S. are anticipated to boost the demand for metal casting in the region. In 2018, major automakers in the region announced a combined investment of USD 4.8 billion in capacity expansions, new product launches, and construction of new facilities, which is expected to augment the consumption of andalusite over the coming years.

In the Middle East and Africa, South Africa is the largest producer and exporter of andalusite and according to the USGS, the country produced 200,000 tons in 2018. Increasing production of steel in the Middle East and Africa is propelling the consumption of refractories, thus, resulting in an increased demand for andalusite. According to the World Steel Association, crude steel production increased by 11.7% from 2017 to 2018 in the region.

Major market players such as Imerys Refractory Minerals, Andalusite Resources, Andalusia S.A., and Resco Products are largely focusing on innovation of new grades of andalusite to serve various applications. In July 2018, Resco Products constructed a new R&D facility in Greensboro, North Carolina, which was aimed at launching various grades of andalusite and to improve product performance.

This report forecasts revenue and volume growth at global, regional, and country levels and provides an analysis of the latest industry trends in each of the sub-segments from 2014 to 2025. For this study, Grand View Research has segmented the global andalusite market report based on application and region: