The global ceramics market was valued at USD 229.13 billion in 2018 and is projected to grow at lucrative CAGR of 8.6% from 2019 to 2025. Increasing government spending on infrastructure and rising construction activities around the world are the key drivers for the market.

Indian government plans to develop 100 smart cities by 2020 with the vision to develop social, economic, and public infrastructure. This is anticipated to push the demand for products such as tiles, sanitary ware, and bathroom fittings in India. Thereby, accelerating the demand for ceramics in the manufacturing of the aforementioned product segment. 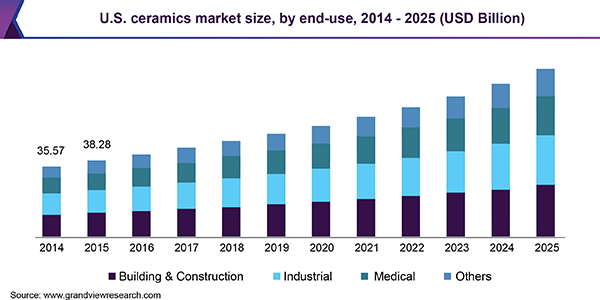 The U.S. market is expected to be driven by increasing oral healthcare expenditure. Ceramics play an integral role in the production of dental crowns, implants, and bridges. As per reports released by American Dental Association in 2017, total U.S. dental expenditure observed a growth from USD 84.56 billion in 2000 to USD 129.12 billion in 2017. The rising expenditure on oral care is likely to push the demand for product in dental application.

Technological advancement in 3D printing and nanotechnology is projected to open new avenues for the market participants. Nanotechnology has created significant impact on floor tiles manufacturing. This technology provides resistance against bacteria and dirt and improves the strength and shelf life of tiles. Major demand for these products is anticipated to come from food processing plants, laboratories and hospitals.

3D printing also known as additive manufacturing is an emerging technology in the ceramics market. Advanced ceramic materials such as alumina, hydroxyapatite and zirconium in various forms are fed into printers to obtain a final product. Zirconium and alumina based ceramic materials are expected to dominate the ceramic 3D printing material over the coming years due to massive demand from medical and dental sectors respectively.

Advanced segment is likely to register highest growth among the product category of ceramics market. The segment is anticipated to grow at a CAGR of 9.1% from 2019 to 2025. Use of high-density alumina to reconstruct fractured or arthritic joints is gaining popularity and is considered as the primary driver for the growth of advanced product segment over the coming years.

Another prominent area of application for advanced product segment is in electronic devices. An average smartphone comprises of numerous ceramic components such as capacitors, filters, sensors, and many more. Nearly 1.5 billion unit of smartphones were sold across the world in 2017 and is likely to reach 1.68 billion units by 2022. Thereby, rising sales volume of smartphones is likely to positively influence the demand for advanced ceramics.

Tiles application is projected to dominate the global ceramics market over the forecast period. Tiles segment accounted for nearly 50.8% of the global industry in terms of revenue in 2018. As per the stats released by World Ceramic Review in 2018, nearly 72% of the global tile production was contributed by Asia Pacific region.

China and India nearly account for 57% of the global tile production. Indian government sponsored schemes such as housing for all by 2022 and development of 100 smart cities is expected to drive the demand for ceramics in production of tiles over the coming years. 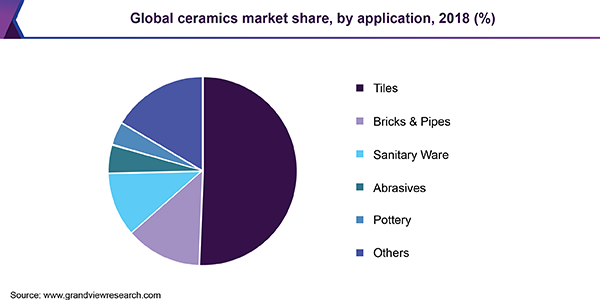 India is the key country which observed significant growth in its sanitary ware industry. The demand was largely triggered by the Swachh Bharat Abhiyan which is a government sponsored scheme to make India defecation free by 2019. As of January 2019, nearly 90 million toilets were constructed across the country. Thus, drive towards sanitation by emerging countries such as India is likely to positively influence the demand for ceramics in production of sanitary wares.

However, Asia Pacific region which observed relentless growth in terms of new construction over the past nine years is observing strong headwinds amidst impending trade war, slowing China’s economy, tighter access to credit and rising interest rates. Such anomalies are likely to push the investors towards wait and watch strategy.

Medical sector is another key end-use sector for ceramics industry. Use of ceramics in dental implants, crowns, and bridges is likely to push the demand product over the coming years. Global dental market is projected to grow at a CAGR of nearly 5.5% from 2017 to 2021.

Asia Pacific was the leading region and accounted for 39.6% of the overall revenue in 2018. China is projected to remain key consumer and producer in the region. The tile production in China observed a growth of nearly 6.9% from 2012 to 2018 as per the stats released by World Ceramics Review in 2018.

In terms of revenue, North America region was second in place next to Asia Pacific region in 2018. The development of 3D printing technology especially in the U.S. is considered as the key driver for the growth of advanced ceramic materials such as alumina and zirconium. The 3D printing ceramics materials market is projected to grow by nearly 28.1% from 2019 to 2025.

European region accounted for a share of nearly 21.1% of the global industry in terms of consumption as of 2018. The region is anticipated to grow moderately over the forecast period. Production of tiles in the region observed a growth of nearly 5.8% from 2016 to 2017 as per the stats published by Association of Italian Manufacturers of Machinery and Equipment (ACIMAC) in 2018.

Some of the players in this sector include AGC Ceramics Co.,Ltd., Imerys Ceramics, Carbo Ceramics, Inc., 3M, Corning, Kyocera Corporation, and many more. The market participants are increasingly focusing towards growing economies such as India, Vietnam, Thailand, Brazil in order to expand their revenues and market positioning. \

Industry is observing rising number of acquisitions as global players aim to capture regional markets to expand their presence and streamline their revenues. For instance, in April 2019, Kyocera Corporation acquired H.C. Starck Ceramics GmbH, a German manufacturer of fine ceramics. Thereby, strategically placing the company to cater demand from industrial machinery sector where fine ceramics based components are widely used.

This report forecasts revenue growth at the global and regional levels and provides an analysis of the industry trends in each of the submarkets from 2014 to 2025. For the purpose of this study, Grand View Research has segmented the ceramics market report based on product, application, end-use, and region:

How big is the ceramics market?

What is the ceramics market growth?

Which segment accounted for the largest ceramics market share?

b. Building & Construction dominated the ceramics market with a share of 41% in 2019. This is attributable to the commencement of new housing projects coupled with an increased focus on infrastructure development in the building & construction sector.

Who are the key players in ceramics market?

What are the factors driving the ceramics market?

b. Key factors that are driving the ceramics market growth include increasing government spending on infrastructure and rising construction activities around the world.