The global grain mill products market size was valued at USD 623.4 billion in 2018 and is expected to expand at a CAGR of 3.6% from 2019 to 2025. The grain mill is used to grind cereals such as wheat, maize, and rice. The entire process of cutting, grinding, and crushing helps to break the solid material into smaller pieces of grains, thereby increasing its overall utility. Increasing demand for non-gelatinized flour, along with enhanced technology, is a key factor boosting the market growth for grain mill products.

Increasing number of cafes and fast food restaurants across the globe is fueling the demand for flour, henceforth driving the market for grain mill products. Additionally, growth of the flour grain mill industry in developing regions such as Asia Pacific and Middle East and Africa is boosting the market growth. Automation in rice processing mill provides many benefits such as higher yield and overall improvement in the operational efficiency. For instance, Ardent Mills uses a patented SafeGuard treatment and delivery system that is a comprehensive, integrated solution and extends flour food safety assurance from the plant to consumers. 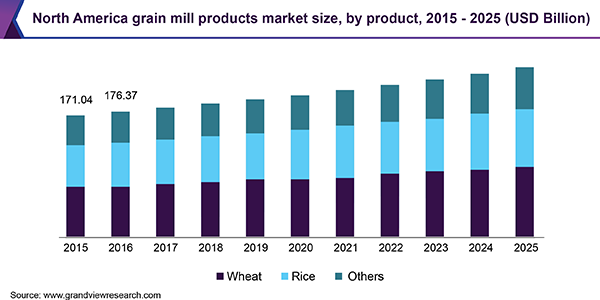 Rising demand across the food industry, along with increased per capita consumption in U.S. and U.K., is a key factor driving the market for grain mill products. Availability of effective technologies for preparation of breads, noodles, pastas, and other flour-based products has contributed to the growth of the grain mill products market. For instance, Nippon Flour Millings Co. Ltd. and Tofuku Flour Mills Co. Ltd. are amongst the main suppliers for milled flour manufacturing noodles and ramen under the brand name, Nissin Foods. According to the South China Morning Post, in 2017, Nissin Foods owns approximately 65% of the total market share as noodles supplier.

Based on product, wheat held a leading market share in 2018. The wheat flour has a number of applications from bakery to confectionary and from household to commercial use. Increasing demand for binders has led to the modification of starches and flours in the production of several food products and industrial goods. The global grain mill industry is witnessing a growing uptake for modification technologies and flours are fortified with additives, micronutrients, and a variety of ingredients, which is augmenting the demand for wheat flour worldwide.

Europe accounts for a substantial share and is estimated to witness significant growth in the market for grain mill products in the coming years.Increasing demand for bakery and bread products and increasing awareness of gluten-free food are likely to fuel the market growth. For instance, ADM Milling has launched the Harvest Sun Malted Flour range for craft bakery customers in European Union and across the world to produce authentic artisan bread and an alternative to malt bread.

Wheat held the largest share of 41.3% in 2018. The wheat flour has a number of applications from bakery to confectionary and from household to commercial use. The global grain milling industry is witnessing a growing uptake for modification technologies and flours are fortified with additives, micronutrients, and a variety of ingredients. This, in turn, is augmenting the demand for wheat flour worldwide. Rice is expected to witness substantial growth over the forecast period. Rice is among the major crops and a staple diet in several countries. Thus, the production of this grain mill product is also expected to increase due to growth in population.

The others category comprises various grain products including barley and maize and is expected to expand at a CAGR of 3.6% over the forecast period. Barley is used as a main ingredient in bread, flat breads such as tortillas, chapattis, and pitas, cakes, muffins, cookies, as well as noodles. Barley is mostly used as a sweetener, binder, and wheat substitute for pasta and noodles. Milled barley is a popular ingredient that is exclusively used to manufacture beers under various brands. For instance, Bira 91 is a popular Indian beer brand manufactured by B9 Beverages Pvt. Ltd. and is made from wheat, barley, and hops, packaged in 330ml, 650ml bottles, and 500ml cans.

North America held the largest share in 2018 and is expected to generate a revenue of USD 238.2 billion by 2025. Rise in demand for bakery and bread products and growing awareness regarding gluten-free food are driving the market for grain mill products in this region.  The region has the leading companies such as Ardent Mills and Conagra Ltd. owing to large production and B2B consumption of grains. Europe is expected to witness significant growth in the coming years owing to high demand for mill grains from the brewing industries. 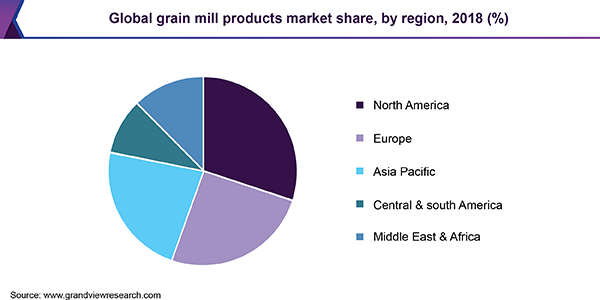 MEA is expected to expand at the fastest CAGR of 3.9% over the forecast period. Countries such as Egypt, Iran, and Turkey are the leading consumers of grain mill products in this region due to higher domestic consumption, growing population, increasing per capita income, and shift in the taste preferences of consumers. For instance, as per the FAO, Turkey exports approximately 2 billion tons of flour each year, and with this export amount, the country is the leader in global flour export. Additionally, as per the “Turkish Flour Industry Inventory” prepared by Southeast Flour Industrialists Association (GUSAD), there are 710 flour mills in Turkey.

The market for grain mill products is moderately fragmented with major players such as Ardent Mills, Fazer Group, ConAgra, Grain Millers, King Arthur Flour, and Goodman Fielder. With the presence of large and small manufacturers competing in terms of quality and price, the market is vastly organized with a few major players across regions. Companies such as Ardent Mills, Archer Daniels, and Conagra specialize in grain milling of products such as rice, wheat, and barley for different types of consumers, both B2B and B2C, based upon its applications including bakery as well as brewing across the world. This, in turn, has driven the demand for grain mill products in countries such as U.S., U.K., and India.

This report forecasts revenue growth at the global, regional, and country levels and provides an analysis of the latest industry trends in each of the sub-segments from 2015 to 2025. For the purpose of this study, Grand View Research has segmented the global grain mill products market report on the basis of product and region: