The global harmonic filter market size was valued at USD 768.5 million in 2017. It is projected to post a CAGR of 7.1% from 2018 to 2025. A harmonic filter is used to mitigate harmonics created by non-linear loads in electrical equipment. These filters are widely used in a number of industries such as oil & gas, manufacturing, water/wastewater, metal and mining, and paper and pulp. 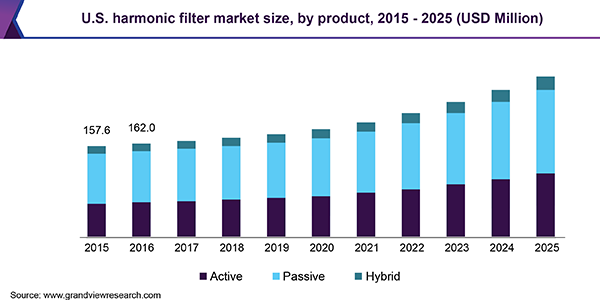 Growing industrialization in developing countries such as China and India coupled with increasing adoption of variable frequency drives (VFDs) in the manufacturing industry has driven the market.

VFDs are being installed in electrical power systems to reduce overall power consumption. However, high usage of VFDs leads to harmonic disturbances in electrical power systems, which in turn, can result in power losses owing to impedance associated with an electrical network (interconnection of electrical components such as resistors, batteries, inductors, and switches). Hence, the growing installation of harmonic filters in power distribution systems to overcome the issue is poised to boost market growth over the forecast period.

Harmonics have always been a key concern and the trend continues in the era of modern electrical power systems as well. These power systems, include solar systems and supervisory control and data acquisition (SCADA) systems. In these systems, high load factors, including programmable logical controllers (PLCs), computers, and printers, create a considerable harmonic distortion in electrical networks as a consequence of applied high-frequency non-sinusoidal current in the circuit.

A load is classified as “non-linear” if its impedance varies with the input voltage. Owing to these variations in the impedance, the current generated by non-linear loads is also non-sinusoidal in nature, which in turn, produces harmonic disturbances in electrical systems. The aforementioned load factor many also result in possible implications such as damage to integrated electrical components and the risk of overheating of transformers, cables, motors, and switchboards. Several types of harmonic filters can be used to overcome these problems by superimposing additional currents of equal magnitude and frequency with existing harmonic currents.

Apart from this, harmonic filters benefit consumers in several ways such as reduction of overall operating costs by efficient use of power, elimination of risk of power system resonance generated by harmonic currents, reduction of risk of operational downtime from overloading, nuisance tripping, and premature plant failure.

Surging demand for static converters and power inverters for commercial applications such as cloud computing and data centers has also been stoking the growth of the market. The commercial sector requires optimal power distribution and is highly reliant on the uninterrupted and efficient operation of equipment. There is a high focus of participants in the energy & power sector on the reduction of voltage distortion in power grids, switch mode power supply (SMPS), and other electrical power systems.

In the past few years, the demand for cloud-based solutions has increased significantly across large and small & medium enterprises, owing to declining infrastructure cost and ease of data accessibility from anywhere across the globe. Thus, significant investments towards building new data centers to meet the global demand for cloud-based solutions is likely to stir up the demand for harmonic filters over the forecast period.

Governments of various countries such as the U.K., Germany, China, and the U.S. are investing a significant amount of capital and resources in the set-up of renewable energy infrastructure in order to meet local energy demand as well as control environmental pollution. Such initiatives are expected to spur the growth of the market over the forecast period.

On the flip side, lack of awareness about the product and its benefits among small-scale manufacturers, high product prices, and trade conflicts between some economies are some of the factors estimated to hinder the growth of the market over the forecast period.

Based on product type, the harmonic filters market has been segmented into active, passive, and hybrid. In 2017, passive filters accounted for approximately 60.0% of the overall market value. They are used in numerous industrial applications such as uninterruptible power supply (UPS) and VFDs for motors, rectifiers, transformers, and others for harmonic mitigation due to overloading and nuisance tripping.

Furthermore, high power consumption in electrical power systems is a fundamental concern across several industrial, commercial, and residential applications such as LED drivers, UPS, copier, and fluorescent lighting. Active filters are widely used because of their ability to reduce power consumption levels of electrical systems and subsequently enhance the overall operational efficiency. Technological innovations in active harmonic filters are anticipated to contribute to the growth of the market over the forecast period.

Based on phase, the market has been bifurcated into single phase and three phase. The three-phase segment commanded more than three fourth of the market revenue in 2017. The dominance of the segment can be attributed to their extensive usage in industrial and commercial electrical power systems for power factor correction and reducing voltage distortion.

Spiraling demand for three-phase filters in the energy & power and manufacturing industries and data center applications is projected to support the growth of the overall market over the forecast years. Moreover, the rising adoption of consumer electronic products such as smartphones, laptops, refrigerators, and others is bolstering the demand for single-phase harmonic filters in DC circuits of the aforementioned electronic products.

Based on voltage, the market has been divided into low, medium, and high voltage. The low voltage segment dominated the global harmonic filters market in 2017. The segment is likely to account for just over 75.0% of the overall market revenue by 2025. Low voltage harmonic filters are used in diverse applications, such as power plants, manufacturing industries, harbor cranes, and data centers. These filters are instrumental in delivering optimal performance whilst keeping power consumption low.

Based on end-use, the market has been classified into industrial, commercial, and residential. In 2017, the industrial segment represented just over 58.0% of the overall revenue. Extensive use of harmonic filters in VFDs for harmonics mitigation across various end-use industries, such as manufacturing, pulp & paper, water treatment plant, energy & power, and metal & mining. 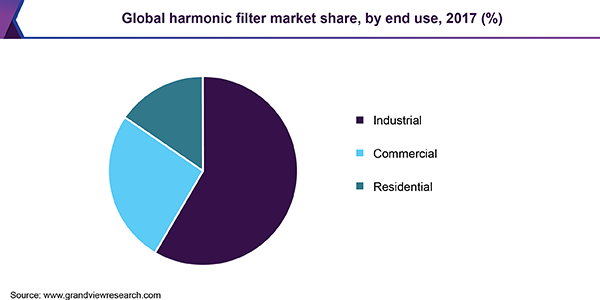 Moreover, the usage of harmonic filters is essential to remove harmonics to acceptable levels in electrical power devices such as electric motors, electric heaters, and power converters, which are used in commercial applications, including office, data centers, and hospitals. Investments aimed at the construction of new data centers and large commercial buildings are expected to boost the demand for the product in the commercial sector over the forecast period.

In 2017, Asia Pacific led the market and held more than 35.0% of the market revenue. High adoption of harmonic filters in the manufacturing and energy & power sectors, especially in developing countries such as China and India, is stimulating the growth of the regional market. Moreover, large-scale production of consumer electronic products coupled with a wide population base in the region is estimated to create an upswing in the adoption of harmonic filters for residential usage.

Furthermore, Europe is anticipated to witness considerable growth during the forecast period, owing to substantial investments in renewable energy projects by governments of several countries such as the U.K., Germany, and France. For instance, Germany and Ghana jointly invested an amount of USD 117 Million in 2017 aimed at the development of renewable energy infrastructure.

Additionally, a few market players are focusing on innovating passive harmonic filters to improve their product portfolios and to cater to dynamic customer requirements. For instance, in October 2018, MTE Corporation launched line extensions for sinewave guardian filters and matrix AP harmonic filters that can operate at 600V and deliver high power efficiency and performance in industrial and commercial applications.

This report forecasts revenue growth at the global, regional, and country levels and provides an analysis of the latest industry trends in each of the sub-segments from 2015 to 2025. For the purpose of this study, Grand View Research has segmented the global harmonic filter market report based on product, phase, voltage, end use, and region: