The global hereditary angioedema therapeutic market size was valued at USD 2.3 billion in 2018. Growing cases of hereditary angioedema (HAE) globally is a key market driver. According to the National Organization for Rare Disorders (NORD), about 1-9 people per 100,000 population are affected by the condition. The actual number of individuals with the condition are significantly higher due to under-reporting and misdiagnosis.

Lack of awareness about HAE is a major reason for misdiagnosis, which in turn, leads to inadequate treatment being provided to patients. Most patients with hereditary angioedema are misdiagnosed for conditions related to appendicitis, gastrointestinal disorders, and other non-allergic angioedema. Significant number of patients being misdiagnosed for the condition has generated a vast patient pool with substantial medical needs. This is likely to be a key driving factor for the market. 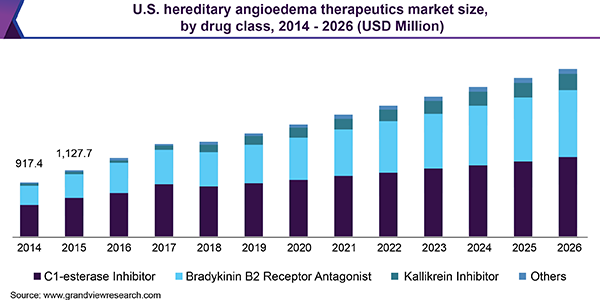 Rising initiatives for improving awareness levels among the general population is another factor contributing to the growth of the market. HAE International (HAEi), an international hereditary angioedema patient organization, along with other patient organizations from across the globe lend their support to HAEday, which is marked on May 16th every year. The aim of the initiative is to facilitate faster diagnosis and also provide optimal standards of treatment and care to patients.

Pharmaceutical drug manufacturers are increasing focusing on developing novel therapeutics for hereditary angioedema in order to cater to the large unmet medical need. For instance, in August 2018, Adverum Biotechnologies, Inc. announced that it had received an orphan drug designation from the FDA for its preclinical gene therapy product candidate ADVM-053. The grant of orphan drug designation from the regulatory body is a positive step for ADVM-053, which is designed to be provided as singleâ€‘administration for sustained expression of C1 esterase inhibitor protein used in HAE treatment.

The market is segmented on the basis of drug class into C1-esterase inhibitor, Kallikrein inhibitor, B2 bradykinin receptor antagonist, and other drugs such as attenuated androgens and tranexamic acid. C1-esterase inhibitor was the largest segment in terms of revenue in 2018. The dominant share of the segment is attributed to use of the products in both on-demand and prophylactic treatment of HAE.

Moreover, geographical expansion of companies in newer markets is likely to help boost segment growth. For instance, in September 2018, Shire plc announced that it had received marketing authorization from Japan’s Ministry of Health, Labor and Welfare (MHLW) for Firazyr used in on-demand treatment of hereditary angioedema.

By route of administration, the market has been divided into intravenous, subcutaneous, and oral. The intravenous therapies segment dominated the market in terms of revenue in 2018. Existing therapies for management of HAE are mostly administered intravenously, a factor that has been a key contributor to its growth.

Intravenously administered therapies have been the mainstay for treating hereditary angioedema patients for a long time. However, patients have limited vascular access, thus limiting the use of repeated IV medication. There are also additional risks associated with the placement of long-term catheters for therapy such as thrombosis and infection. Moreover, frequent administration of intravenous therapies also causes hardships to patients, affecting the treatment compliance rate. 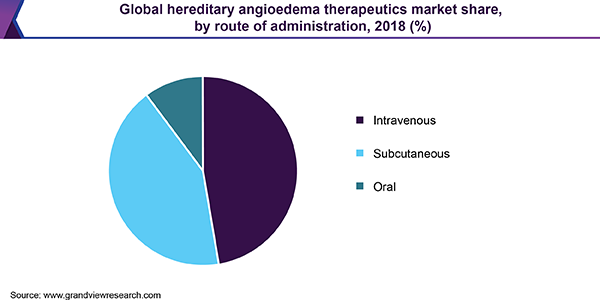 Subcutaneously-administered therapies are expected to exhibit the fastest growth rate throughout the forecast period due to advantages such as convenient dosing and superior efficacy as compared to intravenously administered drugs.

North America accounted for a leading share in the market in terms of revenue in 2018 owing to new product launches by major players, better reimbursement scenario, and well-developed healthcare infrastructure. For instance, in February 2018, the FDA granted regulatory approval for Cinryze for expanded application in pediatric patients aged 6 years and above. Asia Pacific is expected to witness the fastest growth during the forecast period. Growing patient awareness levels, coupled with the launch of novel therapies for hereditary angioedema management, is expected to drive the market in the region.

Key players are entering into distribution agreements in order to increase their market share boost and their presence across different geographies. For instance, in September 2017, Pharming Group N.V. appointed Inceptua Medicines Access as its distribution partner for HAEi Global Access Program. The move was aimed at helping patients in geographies where Ruconest is not commercially available to gain access to the product through regulatory compliant and ethical mechanisms.

This report forecasts revenue growth at global, regional, and country levels and provides an analysis on latest industry trends in each of the sub-segments from 2014 to 2026. For the purpose of this study, Grand View Research has segmented the global hereditary angioedema therapeutic market report on the basis of drug class, treatment type, route of administration, and region: