The global hereditary testing market size was valued at USD 6.1 billion in 2021 and is expected to expand at a compound annual growth rate (CAGR) of 9.2% from 2022 to 2030. The expanding reproductive genetic health space is one of the key market drivers. Key players such as Natera have reported a continuous increase in test volumes in women’s health genetic testing for inherited conditions. This reflects the growing acceptance of hereditary tests among the population, thereby accelerating revenue growth. COVID-19 had a detrimental impact on the market. For example, after the World Health Organization declared COVID-19 a pandemic, governments all around the world used lockdowns to compel social separation as a prophylactic measure. In every industry, this resulted in upheaval, constraints, challenges, and adjustments. 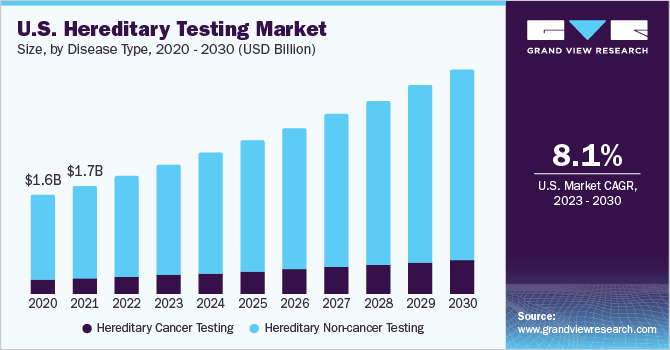 Similarly, the outbreak negatively impacted the inherited genetic analysis sector. This is due to the incapacity of genetic counselors to see clients in person, the failure of doctors to provide guidance, and the laboratory's inability to do the tests. Furthermore, because regulatory bodies such as the Centers for Medicaid Services (CMS) did not recognize genetic counselors as healthcare practitioners, they were prohibited from working during government shutdowns. Clinics also limited face-to-face diagnostic tests to help prevent the disease from spreading. Nonetheless, genetic testing behemoths such as GeneDx provided clinician-ordered genetic screening as a service. Clinics and healthcare practitioners as well as people used telemedicine to provide genetic counseling.

Furthermore, a consistent rise in demand for newborn screening has led to an increase in sales of DNA testing kits. Increasing penetration of newborn screening across the globe is further aiding in revenue growth. Reforms in genetic testing guidelines have led to the inclusion of multigene panel testing for hereditary cancer into clinical practice. The National Comprehensive Cancer Network (NCCN) Clinical Practice Guidelines in Oncology (NCCN Guidelines) for breast, ovarian, and colorectal cancers offer information on some of the cancer risk factors and management.

The need for genetic testing has increased, resulting in an increase in DNA screening kit purchases. The Virginia Department of General Services Division of Integrated Laboratory Facilities, for example, screened 7,867 newborns for over 31 genetic and metabolic illnesses in November 2019. Increased adoption of newborn screening throughout the world is also contributing to market expansion. The application of multigene panel screening in clinics for hereditary disorders has increased, which is due to the changes in the genetic testing procedures.

Although these hereditary tests have significant advantages over conventional tests, several industry experts cited the cost and security concerns faced by consumers pertaining to the test. Moreover, the lack of effective regulation of the tests is another key area that demands focused efforts. Despite these challenges, the genetic testing market is constantly expanding owing to the advantages of these innovative tests along with improved healthcare outcomes.

The hereditary non-cancer testing segment dominated the market with a revenue share of over 80.0% in 2021 and is expected to expand at a significant CAGR over the forecast period. Product and service offerings with regard to various hereditary cancer testing continue to expand. The entry of major players, such as Quest, in this segment in the recent past, has significantly driven the market. Considering breast cancer genetic testing as a lucrative source of revenue, companies are focusing on business strategies to enhance their presence in this segment.

One of the strategies is offering hereditary tests at a price lower than that offered by competitors. For instance, Color Genomics began selling its product for USD 259, whereas similar products offered by Myriad cost around USD 4,000. The increasing affordability of the tests is one of the key drivers of this segment. Furthermore, BRCA1 carriers have an 80% risk of developing breast cancer, which has also accelerated the developments in the hereditary cancer testing market. 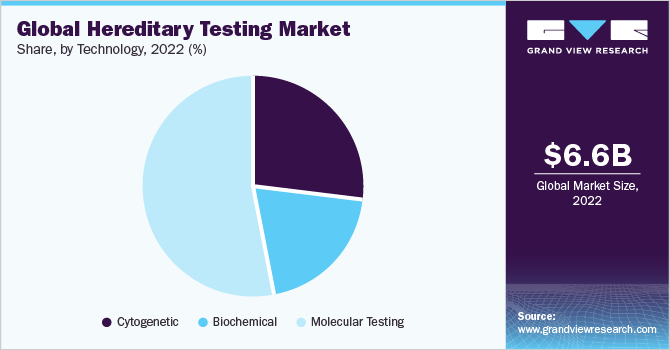 Lung cancer is one of the major cancer forms that has relatively few products. This is because most cases of lung cancer are not related to inherited genetic mutations. Similarly, for cervical cancer, most of the cases are caused by Human Papilloma Virus (HPV) and not genetic mutations. The lack of effective evidence on the heritability of cervical cancer is driving the research activities in this market.

Prenatal testing, irrespective of the associated risks, is increasingly gaining popularity. The cell-free DNA (cfDNA)-based NIPT testing is considered medically necessary by Anthem Blue Cross and Blue Shield of California. Previously, these players promoted cfDNA-based NIPT testing for trisomy’s 21, 18, and 13 only in high-risk pregnancies as determined by maternal age and other factors.

Europe accounted for the largest revenue share of over 30.0% in 2021 and is likely to maintain its lead during the forecast period. This can be attributed to the presence of key players providing genetic tests, the high adoption of advanced treatments, and recommendations provided by government agencies to ensure the quality of hereditary testing services. Variations in regulatory frameworks pertaining to genetic tests across the world have significantly impacted the approval and commercialization of tests in the global market. Currently, a wide variety of genetic tests are being provided by several key companies in the U.S. as well as several countries in Europe, Asia Pacific, and other regions.

Understanding the role of genetic mutation in disease occurrence has significantly accelerated the R&D in this market. Various retrospective studies are being carried out to understand the role of inherited mutations in disease pathology, which has led to key diagnostic developers, such as Quest Diagnostics, entering the market. Continuous authorizations and approvals of genetic tests by the government are expected to propel the organic revenue growth of operating companies. Furthermore, the expanding product portfolio is indicative of growing competition in the market. Each company is making focused efforts to offer products with a competitive advantage. For example, cross-selling efforts by Natera helped the company witness lucrative revenue generation over the past years. The company promotes the collective use of Horizon and Panorama products for women who have not undergone carrier screening tests in their first trimester. Some prominent players in the global hereditary testing market include:

This report forecasts revenue growth at the global, regional, and country levels and provides an analysis of the latest industry trends and opportunities in each of the sub-segments from 2018 to 2030. For this study, Grand View Research has segmented the global hereditary testing market report based on disease type and region:

Which segment accounted for the largest hereditary testing market share?

b. Hereditary non-cancer testing dominated the hereditary testing market with a share of 85.17% in 2021. This is attributable to increasing acceptance and widespread implementation of preimplantation genetic diagnosis & screening and Non-invasive Prenatal Testing (NIPT).

Who are the key players in hereditary testing market?

What are the factors driving the hereditary testing market?

b. Key factors that are driving the hereditary testing market growth include raising awareness of women's reproductive health, the decline in sequencing cost, and the expansion of the genetic testing registry.

How big is the hereditary testing market?

b. The global hereditary testing market size was estimated at USD 6.1 billion in 2021 and is expected to reach USD 6.7 billion in 2022.

What is the hereditary testing market growth?

The most common concern for the governments of all COVID-19 hit nations is the excruciating need to screen for and test large numbers of patients for possible Sars-Cov-2 infection. As a result, most of them are facing major shortages in the supply for diagnostic kits to test for the virus. Diagnostics virology entities are under immense pressure to provide reliable testing kits, and there is a surge in demand for in-vitro or point-of-care testing capacities by labs across a large number of countries. The report will account for COVID-19 as a key market contributor.