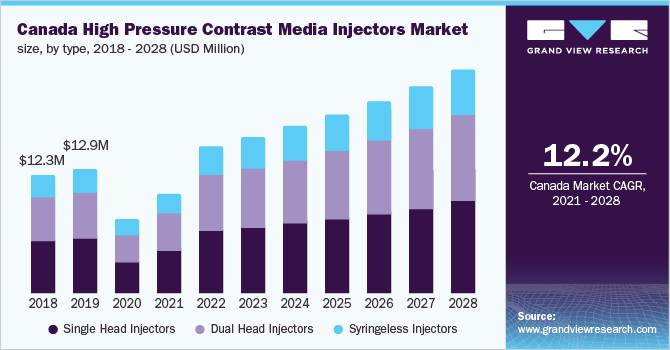 The recent outbreak of the COVID-19 pandemic is also anticipated to significantly impact the growth of the market. Outpatient department services at clinics, nursing homes, dispensaries, and smaller hospitals have been limited by lockdown and social distancing, resulting in fewer referrals for imaging tests. The patient movement has been restricted as well. Patients are postponing non-urgent investigations due to financial stress. A minor decline is expected in imaging volumes and revenues as outpatient elective imaging investigations are not insured and patients' out-of-pocket spending capacity is reduced which may have a negative impact on the market. In the long run, however, digital health services such as telemedicine/teleradiology, artificial intelligence, and deep learning technologies are expected to accelerate and gain widespread acceptance.

As artificial intelligence penetrates the healthcare industry, manufacturers of high pressure contrast media injectors are focusing on the development of intelligent devices to minimize the possibility of human error. Advancements in the form of interface systems such as Radiology Information System (RIS), and Picture Archive and Communication System (PACS) are useful in collecting patient information and administering the appropriate amount of contrast required. To make efficient use of smart technology penetration, Bracco Group Company has developed specific high pressure contrast media injectors for intravenous procedures in CT and MRI.

The consumable segment dominated the market and accounted for the largest revenue share of 61.3% in 2020. The segment is expected to witness a CAGR of 11.7% during the forecast period. The rapid growth of this segment can be attributed to the factors such as high usage of disposable devices owing to the high safety, as well as features like user-friendliness, high efficiency, and less contrast media wastage. The consumable segment is further segmented into syringes, tubings, and others. These consumables need to be re-purchased for every new procedure as opposed to instruments. The other consumables held the largest market share in 2020 whereas the syringe segment is expected to grow at the fastest rate. Several major manufacturers are emphasizing their efforts on the development and introduction of syringeless injectors, which is expected to boost the segment's growth.

The injector system segment is anticipated to witness the fastest growth rate over the forecast period, attributed to the rising product demand as the injector system can be used in multiple patients. As a result, there is less wastage, a shorter contrast preparation time, reduced disposable expenses, and higher radiographer satisfaction.

The single head segment dominated the market and accounted for the largest revenue share of 44.6% in 2020. As angiography, CT, and MRI are the most common applications. Furthermore, demand in emerging economies such as China, India, and Brazil is expected to be fueled by the low cost of these devices as compared to other systems. This segment is also anticipated to prosper from the emergence of various new products.

The dual head injector segment is expected to witness significant CAGR in the market over the forecast period. This can be attributed to the advantages including faster operations and controlled delivery. Newer contrast-injection systems integrate enhancements to manage injector protocol data, improve patient safety, and workflow efficiency.

The interventional cardiology segment dominated the market for high pressure contrast media injectors and accounted for the largest revenue share of 35.5% in 2020. The segment is expected to witness a CAGR of 11.8% during the forecast period. A steep rise in the prevalence of cardiovascular problems has led to a higher demand for interventional cardiac surgery for diagnosis and treatment. As a result, over the forecast period, increased demand for novel products with high accuracy and efficiency is expected to fuel market growth. According to the World Health Organization, 17.9 million people died from cardiovascular diseases in 2019, accounting for 32% of all deaths worldwide. Around 23.6 million people are predicted to die from cardiovascular diseases by 2030.

The interventional radiology segment is projected to grow at the fastest rate during the forecast period as it is primarily used to diagnose a variety of disorders, including cardiovascular diseases, cancer, broken bones, gastrointestinal problems, and blood clots. In addition, the segment's expansion has been aided by an increase in demand for non-invasive medical imaging procedures and technical advancements.

The hospitals segment dominated the market and held the largest revenue share of 60.8% in 2020. The segment is expected to grow at the fastest rate during the forecast period, owing to an increase in the number of hospitalization of patients with cancer, neurological problems, and cardiovascular diseases. Hospitals are the primary users of high pressure contrast media injectors because of their vast range of uses in radiology, interventional radiology, and interventional cardiology. Furthermore, the growing number of diagnostic imaging procedures performed in hospitals, rising adoption of minimally invasive procedures (including diagnostic imaging systems) in hospitals to improve patient care quality as well as hospitals' increasing preference to automation and digitization of radiology patient workflow, can be linked to this segment's growth.  In addition, the segment's expansion is likely to be aided by a growing focus on the development of healthcare facilities in emerging countries in the Asia Pacific and African regions. 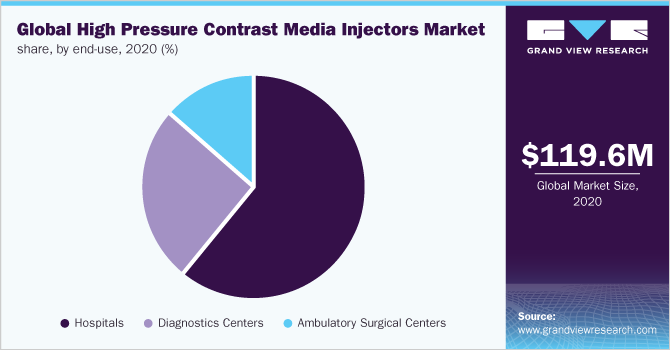 The diagnostic centers segment is also expected to witness significant growth during the forecast period. The increased knowledge of chronic diseases such as cancer, neurological diseases, and neurodegenerative disorders is the key driver of the segment. Growing awareness among people is leading to an increase in demand for CT and MRI treatments, which are used to diagnose, plan therapy, and prevent chronic illnesses. These diagnostic centers provide a comprehensive range of diagnostic and preventative health services. Because most hospitals lack the necessary space for specialized imaging equipment rooms, these diagnostic centers are advantageous. In addition, these facilities provide services to a number of hospitals. Imaging equipment at such establishments is upgraded more regularly than in hospitals.

North America dominated the high pressure contrast media injector market and accounted for the largest revenue share of 39.1% in 2020. The region is expected to witness a CAGR of more than 11.0% during the forecast period. Factors such as rapid adoption of modern technologies and enhanced healthcare infrastructure, strong purchasing power, and a fair reimbursement framework are driving the market in North America. Also, an increase in factors, such as the prevalence of cancer, cardiovascular diseases, neurology diseases, availability of insurance coverage, and a number of trauma and accident cases, which require contrast studies to be performed is projected to drive the demand for high pressure contrast media injector. Following North America, Europe accounted for a significant revenue share in the market in the same year.

In Asia Pacific, the market is anticipated to show the fastest growth over the forecast period owing to expanding healthcare spending, rapidly evolving healthcare infrastructure, and increasing medical tourism in the region. In addition, the rising prevalence of chronic conditions like cancer, orthopedic ailments, epilepsy, and cardiovascular disease is expected to fuel growth.

The market is highly competitive. Some of the key strategic initiatives undertaken by market players include new product development, mergers, acquisitions, partnerships, and collaborations. For instance, in December 2020 — Bayer Radiology announced Radimetrics v3.0. With increased functionality and features, Radimetrics 3.0 assists in managing radiation dose and contrast dose throughout the chain of care. Some of the prominent players in the high pressure contrast media injectors market include:

This report forecasts revenue growth at global, regional, and country levels and provides an analysis of the latest industry trends in each of the sub-segments from 2016 to 2028. For the purpose of this study, Grand View Research has segmented the global high pressure contrast media injector market report on the basis of product, type, application, end-use, and region:

How big is the high pressure contrast media injectors market?

b. The global high pressure contrast media injectors market size was estimated at USD 119.6 million in 2020 and is expected to reach USD 162.8 million in 2021.

What is the high pressure contrast media injectors market growth?

b. The consumable segment dominated the high pressure contrast media injectors market with a share of 61.3% in 2020. The rapid growth of this segment can be attributed to the factors such as high usage of disposable devices owing to the high safety, as well as features like user-friendliness, high efficiency, and less contrast media wastage

Who are the key players in high pressure contrast media injectors market?

What are the factors driving the high pressure contrast media injectors market?