The global hospital acquired infections therapeutic market size was valued at USD 10.3 billion in 2019 and is expected to expand at a compound annual growth rate (CAGR) of 2.4% from 2020 to 2027. The high prevalence of HAIs, approval & launch of new therapies, and increasing R&D initiatives are some of the major factors driving the market for HAIs therapeutics. 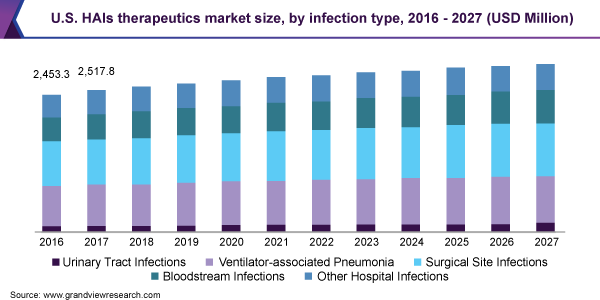 Hospital acquired infection (HAI), also called nosocomial infection is caused by bacterial, fungal, and viral pathogens while receiving treatment in health care facilities. The most common types of HAIs include urinary tract infection (UTI), pneumonia (e.g. ventilator-associated pneumonia (VAP)), surgical site infection (SSI), and bloodstream infection (BSI). The high prevalence of these HAIs is expected to significantly drive the demand for its therapeutics and fuel market growth in the coming years. According to the report published by the Organisation for Economic Co-operation and Development (OECD) in 2018, annually around 3.8 million people in EU countries acquire a healthcare-associated infection in acute care hospitals. The same source also states that each year around 90,000 people in the EU countries die due to some type of HAIs.

The high prevalence of HAI and increasing resistance to available antibiotics have significantly fueled the demand for novel HAI therapeutics. Thus, major players in the market are involved in excessive R&D activities for the development of new HAI drugs and gaining its approval in major markets. For instance, in June 2019, the FDA approved an expanded indication of Merck & Co., Inc.’s drug Zerbaxa (ceftolozane and tazobactam), for the treatment of ventilator-associated bacterial pneumonia (HABP/VABP) and hospital-acquired bacterial pneumonia in patients 18 years and older.

In recent decades, chronic diseases such as cancer, heart disease, diabetes, and arthritis have become a major health issue with a rising prevalence globally. According to the data published by International Agency for Research on Cancer (IARC), the total number of new cancer cases was estimated to be around 18.1 million in 2018. The high prevalence of these chronic diseases has led to an increase in hospital admissions. For instance, according to the data published by the New York State Department of Health in November 2019, around 40% of adults in New York suffer from some type of chronic disease, which leads to around 23% of all hospitalizations. Thus, increasing hospitalizations due to the rising prevalence of chronic diseases is anticipated to result in higher cases of HAIs, aiding the growth of the market for HAIs therapeutics.

In the recent past, there has been a significant decrease in the prevalence of HAIs in developing economies. According to the Healthcare-associated Infections Progress Report published by the CDC in 2018, acute-care hospitals in the U.S. reduced central line-associated bloodstream infections by 9%, Clostridium difficile infections by 12%, and catheter-associated urinary tract infections by 8%. This decline is mainly attributed to the imposition of norms by the government mandating maintenance cleanliness and hygiene management in the healthcare facilities. Thus, adherence to these norms and increased awareness among healthcare workers, professionals, and staff have had significantly decreased the prevalence of HAIs. Developed countries such as the U.S., U.K., and Germany are actively engaged in HAI preventive practices. Thus, the declining demand for HAI therapeutics in developed countries with increasing precautionary measures is anticipated to hamper the market growth.

In 2019, the Surgical Site Infections (SSIs) segment dominated the market for HAIs therapeutics and held the largest revenue share of 31.8% due to the rising number of surgical procedures and subsequent rising cases of SSIs. According to CDC, nearly 27 million surgical procedures are performed every year in the U.S., out of which 5% of the patients develop SSIs. SSIs affect as many as 300,000 patients in the U.S. every year. Such types of infections tend to increase the hospitalization by 7 to 10 days and the hospitalization cost by USD 3,000.

The Urinary tract infections (UTIs) segment is anticipated to show the fastest growth rate during the forecast period owing to the growing number of UTI cases and rising awareness among people about the disease condition in less-developed countries. UTIs commonly affect the kidney, bladder, ureters, and urethra. This condition is common among the women population, around 40% of them experience UTI at some time. The most common type is Catheter-associated UTIs (CA-UTIs) as reported by the National Healthcare Safety Network. It accounted for around two-thirds of the UTIs as per CDC 2017 data. In addition, the introduction of novel drugs for UTI is also another factor generating high growth for the segment in the market for HAIs therapeutics.

The antibacterial drugs segment dominated the market for HAIs therapeutics and accounted for the largest revenue share of 87.3% in 2019. This dominance is attributed to the fact that the majority of the HAIs are caused by bacteria. Hence, a large ratio of HAIs is treated with antibacterial drugs. 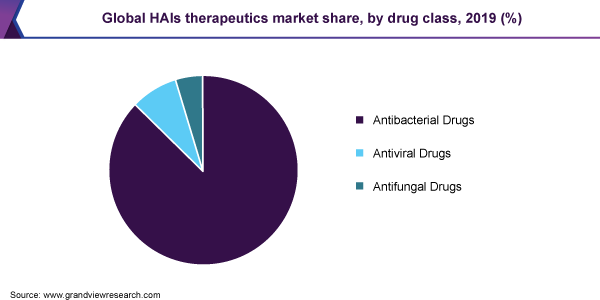 Furthermore, antibacterial therapy is the first line of treatment for any type of hospital-acquired infection. All patients affected with gram-positive and gram-negative pathogens are required to be treated with antibiotics. Empiric antibiotic therapy should be considered initially on the basis of various risk factors for multidrug-resistant pathogens. Empiric antibiotic therapy is performed to avoid complications such as renal damage, pyelonephritis, and bloodstream infections. Antibacterial therapy might be as short as 7 days or as large as 14-21 days.

Europe dominated the market for HAIs therapeutics and accounted for the largest revenue share of 35.4% in 2019 and is expected to dominate the market throughout the study period. This dominance is attributed to the high prevalence of HAIs in European countries and increasing approvals and launch of novel HAI therapeutic drugs in the region. Furthermore, higher accessibility of novel hospital-acquired infection therapeutics in the European countries due to the local presence of major players such as GlaxoSmithKline Plc, F. Hoffmann-La Roche AG., Allergan Plc, and Bayer AG is further expected to support regional growth.

In Asia Pacific, the market for HAIs therapeutics is anticipated to show significant growth during the forecast period. This growth is attributed to the increasing prevalence of chronic diseases in emerging economies such as India and China which has led to increased hospitalizations. For instance, according to the data published by Globocan, in 2018 around 4,285,033 new cases of cancer were diagnosed in China. Thus, the increasing rate of HAIs with increasing hospitalizations is anticipated to foster demand for HAI therapeutic drugs and support regional growth.

Key players are adopting both organic and inorganic growth strategies such as new product development, regional expansions, and strategic collaborations to gain an advantage. In March 2017, Pfizer Inc., a U.S.-based multinational pharmaceutical company launched its drug Zavicefta (Ceftazidime-Avibactam) in the U.K. and Germany. Zavicefta is approved for various indications including Hospital-Acquired Pneumonia (HAP). Increasing regulatory approvals and the launch of novel therapeutic drugs for HAIs are anticipated to support market growth over the forecast period. Some of the prominent players in the hospital acquired infections therapeutic market include:

This report forecasts revenue growth at global, regional, and country levels and provides an analysis of the latest industry trends in each of the sub-segments from 2016 to 2027. For the purpose of this study, Grand View Research has segmented the global hospital acquired infections therapeutic market report on the basis of drug class, infection type, and region:

How big is the hospital acquired infections therapeutic market?

What is the hospital acquired infections therapeutic market growth?

b. Europe dominated the HAI therapeutics market with a share of 35.4% in 2019. This is attributable to the high prevalence of HAIs in European countries and the increasing approvals and launch of novel HAI drugs in the region.

Who are the key players in the hospital acquired infections therapeutic market?

What are the factors driving the hospital acquired infections therapeutic market?

b. Key factors that are driving the HAI therapeutics market growth include the high prevalence of HAIs, approval & launch of new therapies, and increasing R&D initiatives.