The global HVAC control systems market size was valued at USD 13.1 billion in 2018 and is expected to register a CAGR of 12.2% from 2019 to 2025. The anticipated market growth is attributed to ascending demand for building automation systems, coupled with technological advancements associated with HVAC control units. Furthermore, rising customer inclination towards comfort has increased the demand for HVAC controls that can be operated remotely. All these factors are expected to positively influence the market over the forecast period. 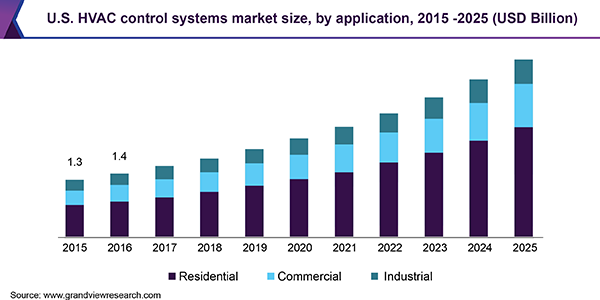 Demand for HVAC equipment is soaring owing to an increase in construction sector spending, rapid urbanization, and rising disposable incomes across major economies. Another major factor contributing to increased HVAC demand across the globe is climate change. Due to rising temperature and unpredictable climatic conditions, HVAC equipment have become a necessity rather than comfort. As control systems are intrinsic to all HVAC equipment, the growing demand for HVAC equipment is further expected to fuel market growth.

The HVAC control systems market is expected to experience considerable growth owing to government initiatives aimed at creating a green, clean, and sustainable environment. Several governments around the world are offering financial benefits to promote use of energy saving equipment in both residential and commercial spaces. For instance, the U.S. government introduced the Energy Policy Act of 2005, which provides a tax deduction of up to USD 1.80 per square foot for new commercial buildings. The tax benefit is awarded to buildings that reduce regulated energy consumption by 50 percent relative to the requirements stated in the 2001 new construction standard developed by the American Society of Heating, Refrigerating and Air-Conditioning Engineers, Inc. (ASHRAE 90.1). Such government initiatives, along with rising awareness about environmental degradation and energy management, are expected to upkeep the demand for energy efficient HVAC control systems.

The demand for HVAC controls is also anticipated to gain momentum owing to the introduction of technologically advanced smart controls. Manufacturers are focusing on providing Internet of Things (IoT) enabled HVAC control systems to support connectivity and home automation. For instance, CoolAutomation ltd. has designed a smart HVAC controller named ControlPad for home automation. The controller is equipped with the RS485 network and ASCII interface that helps in communicating with multiple equipment such as heating, cooling, lighting, and curtains.

The need for replacement of existing old control systems with newer, more sophisticated controllers is expected to fuel the market growth. Advanced systems offer numerous benefits over existing systems, including reduced operating costs and increased energy efficiency. Thus, retrofits, replacements, and incremental upgrades to existing systems are expected to drive the market in developed economies such as U.S., U.K., Germany, and Japan. Moreover, advancements in functionalities of HVAC sensors used to measure CO2, humidity, occupancy, and temperature are also expected to upkeep the market demand over the forecast period.

Components that constitute an HVAC control unit include sensors, controllers, and controlled devices. The sensor is an imperative component used to measure the environmental variables such as temperature and humidity. This information is then communicated to the controllers and used to maintain a controlled environment. Although multiple sensors are used in HVAC control systems, temperature sensors are most commonly used. Other sensors used include humidity, occupancy, economizer, dew point, and CO2 sensors. The sensors segment held the largest market share in 2018 and is expected to dominate the market throughout the forecast period.

The controllers segment is expected to register a CAGR of more than 11.0% from 2019 to 2025. The high growth rate is attributed to the increasing use of thermostats across the globe. Thermostats are the most commonly used controllers that maintain the desired temperature by switching the heating/cooling device on or off. Some thermostats maintain temperature by regulating the flow of a heat transfer fluid.

Based on application type, the market has been segmented into residential, commercial, and industrial HVAC control systems. The residential segment dominated the overall market in 2018, accounting for more than 50% of the revenue share. Increasing HVAC demand across the residential sector, particularly in developing economies, was a major factor contributing to high market share. This trend is expected to continue over the forecast period, further driving market growth. 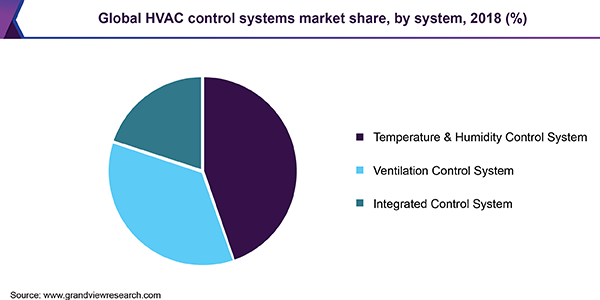 The Asia Pacific market dominated the overall industry in 2018 and accounted for over 40% of the revenue that year. The regional market is likely to retain its dominance over the forecast period as well. The growth is attributed to increasing demand from emerging economies such as China and India. Furthermore, rising disposable income, coupled with availability of low-priced systems in these countries, is anticipated to intensify the competition in the region.

North America is expected to witness substantial growth, registering a CAGR of more than 10.0% from 2019 to 2025. The regional HVAC equipment market has achieved stability over the years. However, the need to replace or upgrade the existing aging systems with newer control systems is anticipated to drive market growth in the region. Another major reason for the expected growth is a higher percentage of smart homes particularly in the U.S. The connected devices in smart homes allow integration of smart HVAC control systems, which provides ease of control and increased efficiency. Additionally, the region is characterized by the presence of manufacturers, OEMs, and a large consumer base. Companies such as Honeywell International, Nest, and Johnson Controls based in the region are significantly contributing to the growth of the market.

The market is consolidated and is characterized by high competition. Key players operating in the market include Honeywell International, Johnson Controls, Schneider Electric, Delta Controls, Nest, Ingersoll-Rand plc, and Mitsubishi Electric Corporation. These market players particularly focus on entering into mergers and acquisitions and joint ventures/collaborations in order to enhance their market presence.

Market players are increasingly investing in research and development in response to the growing demand for advanced technology from developed economies. For instance, In June 2019, Telstar announced its Smart Cleanroom, an innovative HVAC control system for pharmaceutical companies that considerably reduces energy consumption and operational costs. The advent of smart control systems and the use of IoT are anticipated to boost the growth of the market over the forecast period.

The report forecasts revenue growth at global, regional, and country levels and provides an analysis of the latest industry trends and opportunities in each of the sub-segments from 2015 to 2025. For the purpose of this study, Grand View Research has segmented the global HVAC control systems market report based on component, system, application, and region: