The global hybrid adhesives & sealants market size was estimated at USD 11.86 billion in 2017 and is projected to witness a CAGR of 8.3% from 2017 to 2025. Growing preference for hybrid resins in end-use industries, such as building and construction and automotive is expected to drive the global market. 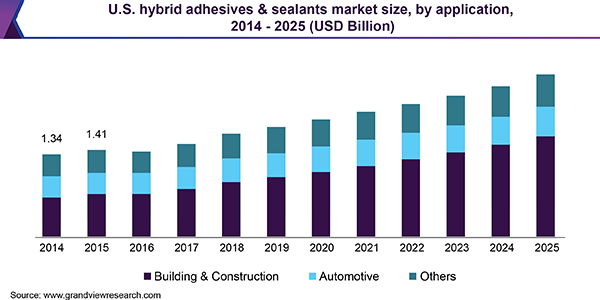 Hybrid sealants and adhesives are a combination of two resins that inherit the pros of both resins, but avoid most of their cons. When compared to single resin-based adhesives and sealants they offer a better and efficient performance, which is driving their increasing application.

The growth of the global market is attributed to increasing infrastructural developments and automotive production across the globe. The global construction industry is expected to progress at a growth rate of 6% over the forecast period. Asia Pacific is expected to remain the largest market while Middle East and Africa are expected to witness the fastest growth over the coming years. Developing Asian countries are showing rapid progress. For instance, the government of India has increased its infrastructure budget by approximately USD 14.3 billion (â‚¹ 1 lakh crore) for the financial year 2018-2019.

The global automotive production has also witnessed a growth of 2.04% from 2014 to 2017. The growing population, technological developments, and increasing disposable income are all contributing to the growth of the automotive industry. The global hybrid adhesives & sealants market is mainly driven by the increasing demand for lightweight vehicles, as the products contribute significantly towards the weight reduction of vehicles. The global lightweight vehicle production is expected to expand at a CAGR of 2% over the forecast period.

The prices of individual resins have been witnessing a gradual increase over the past years. For instance, Hexion Inc. increased prices for its liquid epoxy resins more than six times over the past four years. Owing to the increasing raw material prices, the cost of the final product becomes higher than the single resin-based adhesives and sealants, which is likely to hamper the market growth.

Building and construction were the largest application segment and accounted for 56.4% of the market in terms of revenue, in 2017. The products are extensively used in sealing and waterproofing applications along with cable sealing, through-wall pipe, expansion joint filling, and concrete sealing. Facades form an important part of the construction industry and increasing the market for facades is expected to augment the demand. The global facades market is expected to expand at a CAGR of 7.3% from 2016 to 2025.

In terms of revenue, automotive was the second largest application segment in 2017. Hybrid adhesives play a significant role in the production of lightweight vehicles. They provide strong adhesion and bonding in less time that allows increased usage of lightweight materials and reduces the use of mechanical fasteners to a larger extent. The use of hybrid adhesives eliminates the cost of mechanical fasteners, improves time efficiency, and eventually increases productivity. The growth of the lightweight vehicles market is strongly contributing to the rising demand for hybrid adhesives.

The other applications include industrial assembly, marine production, and heavy equipment pulling. Hybrid adhesives and sealants are used in industrial assembly as a replacement to mechanical fasteners. For instance, the usage of screws and rivet connections make the components weak due to processes like drilling holes and welding. Usage of these products does not involve such procedures, which leads to strong bonding between components. They are used in the construction of boats, yachts, and ships. For example, in July 2015, Sika’s hybrid adhesives & sealants were used in the exterior and interior structure of a floating restaurant, called La Vue, situated at the Durban Harbor.

Based on resin type, the market is segmented into epoxy-cyanoacrylate, MS polymer, and others. In terms of revenue, MS polymer accounted for a market share of 58.1% in 2017. MS polymer resins are used in the production of both hybrid adhesives and hybrid sealants. They are composed of polyurethane and silicone. The final products offer the strength of polyurethane along with weathering resistance of silicone. Their demand is mainly attributed to the growth of the building and construction industry, where they are majorly utilized. 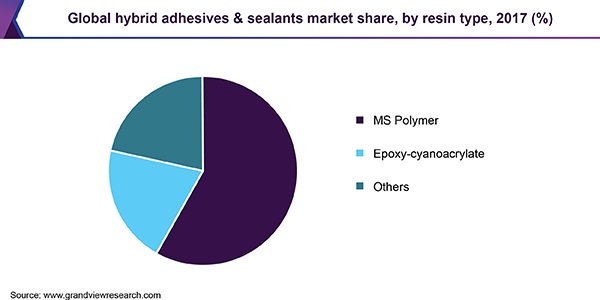 Epoxy-cyanoacrylate based products are extremely efficient as they overcome the disadvantages of individual epoxy and cyanoacrylate. For example, unlike cyanoacrylate, epoxy-cyanoacrylate offers a deeper gap filling and reduces the risk of blooming. Unlike epoxy, the product offers rapid fixture time and enhanced bonding ability with various types of substrates.

In terms of volume, Asia Pacific was the largest regional segment in 2017 with a market share of 44.5% and it is likely to dominate the market over the forecast period. The infrastructural developments, increasing automotive production, and growth in the manufacturing industry are all contributing to the demand in Asia Pacific.

China is the key country in the region, which is a major contributor towards the overall Asia Pacific construction industry and to the lightweight vehicles production. The production of lightweight vehicles is an extremely important scenario for China’s automotive industry owing to the increasing concerns for energy and emission reductions.

In terms of revenue, Europe was the second-largest segment in 2017. The region is expected to witness slow growth as compared to other regions due to sluggish building and construction industry growth. Europe’s automotive production grew by 2.05% from 2014 to 2017. Germany was the highest contributor in 2017, with a share of 25.5% in total cars and commercial vehicles produced in Europe.

Demand from Central and South America and Middle East and Africa is expected to grow at a rapid pace over the forecast period owing to significant infrastructural developments taking place in both regions. Brazil witnessed a growth of 3.6% in automotive production and its construction industry is also expected to witness steady growth during the coming years in comparison to previous falls. Residential sector is the key contributor to the Brazil construction industry.

The market is dominated by major players such as 3M, Bostik, Wacker Chemie AG, Henkel Corporation, and Sika. Acquisitions and new products introduction are the key strategies adopted by the major players. For instance, in 2017-2018, Bostik acquired Den Braven in 2016 in order to enhance its hybrid adhesives & sealants business.

In September 2014, Henkel Corporation launched its first hybrid adhesive product. Later in May 2017, the company added two new products to its product portfolio on account of increasing competition in the adhesives industry.

This report forecasts revenue and volume growth at global, regional, and country levels and provides an analysis of the latest industry trends in each of the sub-segments from 2014 to 2025. For the purpose of this study, Grand View Research has segmented the global hybrid adhesives & sealants market report on the basis of resin type, application, and region:

How big is the hybrid adhesives and sealants market?

What is the hybrid adhesives and sealants market growth?

Which segment accounted for the largest hybrid adhesives and sealants market share?

b. MS Polymer Hybrid dominated the hybrid adhesives and sealants market with a share of 60% in 2019. This is attributable to high strength of polyurethane along with weathering resistance of silicone resulting in demand from building and construction industry.

Who are the key players in hybrid adhesives and sealants market?

b. Some key players operating in the hybrid adhesives and sealants market include 3M, Bostik, Wacker Chemie AG, Henkel Corporation, and Sika.

What are the factors driving the hybrid adhesives and sealants market?

b. Key factors that are driving the market growth include growing preference for hybrid resins in end-use industries, such as building and construction and automotive.