The global hydrogen energy storage market size was valued at USD 14.69 billion in 2021 and is expected to expand at a compound annual growth rate (CAGR) of 4.4% from 2022 to 2030. The market growth can be primarily attributed to the swift industrialization of developing countries and increasing acceptance of alternative forms of energy. The U.S. market is projected to witness significant growth over the forecast period owing to the ongoing research & development and construction of full-scale storage projects in the country. The Hydrogen Fueling Infrastructure Research and Station Technology (H2FIRST) is a part of an initiative undertaken by the Fuel Cell Technologies Office, based on prevalent and upcoming technologies at national labs. 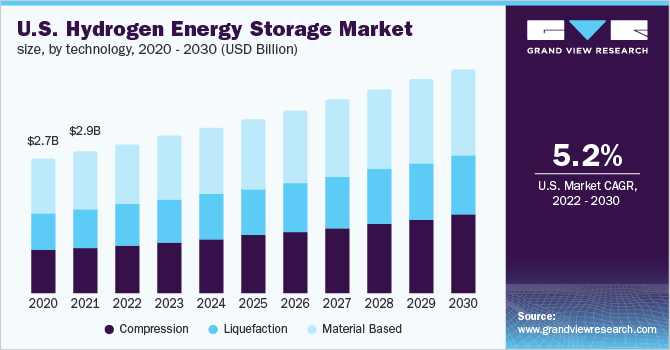 Development and construction of cost-effective and energy-saving hydrogen stations across the country are among the key objectives planned by the government. Such factors are expected to boost the growth of the market in the U.S. Increased hydrogen applications across a variety of industries are predicted to fuel market expansion. Hydrogen, for example, can be used for industrial applications in oil refineries, power generation in stationary fuel cells, as a fuel in fuel cell vehicles, and stored as a cryogenic liquid, compressed gas, or loosely bonded hydride chemical compound.

According to the International Renewable Energy Agency (IRENA), for renewable hydrogen to be competitive with fossil fuel-produced hydrogen, it should be generated at less than USD 2.5 per kg. The cost is determined by a number of factors, including the location of production, market segment, renewable energy power tariffs, future electrolyzer investments, and others. Because of the low cost of hydrogen manufacturing, more energy storage systems will be deployed. The industry participants are substantially forward integrated. Demand for stored hydrogen in a variety of end-use applications, including fuel cell automobiles, grid services, and telecommunications, is forcing market players to integrate their facilities with the end-use industries.

The compression storage technology segment accounted for the largest revenue share of over 40.0% in 2021. This can be attributed to the wide applications of compressed hydrogen in various sectors. Compressed hydrogen is utilized in on-site stationary power generation, hydrogen filling stations, and road transportation fuel cell vehicles. Furthermore, the compression technique is utilized to store hydrogen in cylinders for industrial applications in the manufacturing and chemical industries.

Bulk industrial gas suppliers such as Linde, Air Liquide, and Air Products & Chemicals Inc. prefer liquefaction technology to deliver hydrogen in bulk to industrial end users such as the oil and gas and chemical industries. Liquefaction technology is used by industrial end users who demand bulk hydrogen in their processes. Over the projection period, the material-based storage technology segment is predicted to increase at a high rate. In comparison to other storage technologies, this technology includes hydride storage systems, liquid hydrogen carriers, and surface storage systems, all of which have a high volumetric storage density.

The industrial application segment held the largest revenue share of over 40.0% in 2021. The use of hydrogen energy storage for residential applications is limited around the world. Countries such as Japan, Germany, France, and Belgium are strengthening their legislative frameworks, which is likely to catalyze the utilization of fuel cells in residential applications for micro combined heat and power. For instance, Japan’s ENE-FARM program has fueled the adoption of fuel cell-based systems for use as fuel cell micro-cogeneration in the residential sector.

The commercial application segment includes hydrogen refueling stations and micro-CHP fuel cell-based installation for commercial applications. The total number of hydrogen refueling stations around the world has more than doubled in the last five years from 181 in 2014 to more than 540 as of 2020. The continuous growth in deployment is led by the European and Asian regions.

The solid segment held the largest revenue share of over 45.0% in 2021. The storage of hydrogen in solid form, i.e., stored in another material, is one of the emerging areas in the market. Methods for storing hydrogen in the solid form include techniques involving the absorption or adsorption mechanisms of hydrogen by a material. 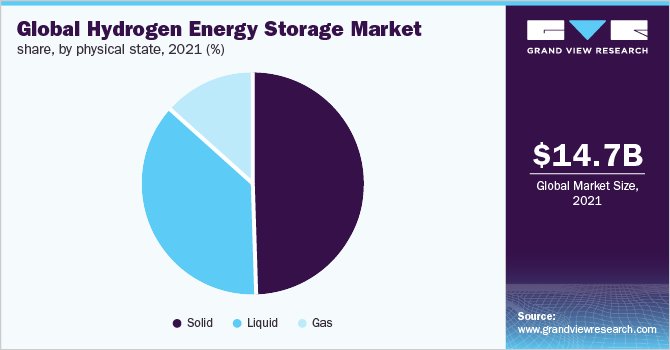 Currently, the storage of hydrogen in the liquid form is being reserved for certain special applications, i.e., in high-tech areas such as space travel and for bulk storage applications at industrial levels. For example, the tanks on the Ariane launcher, which are designed and manufactured by Air Liquide, contain 28 tons of liquid hydrogen, which provides fuel to the central engine.

The Asia Pacific region held the largest revenue share of over 35.0% in 2021. The Asia Pacific market consists of major countries such as China, Japan, South Korea, India, Australia, and other southeast Asian countries. Major countries such as Russia, Spain, Germany, Italy, the U.K., and smaller Eastern and Central European countries make up the European hydrogen energy storage industry. The enormous demand for hydrogen generation from a variety of end-users, including industrial and commercial institutions, is to blame.

Large-scale hydrogen energy storage projects are being built across Europe, which is increasing the market demand. For example, Orsted, a Danish corporation, plans to use excess wind farm electricity in the North Sea to manufacture renewable hydrogen energy via electrolysis and sell it to large commercial users. Due to rigorous pollution control rules, the use of cleaner fuels, and an increase in fuel cell applications, the market in North America is predicted to rise at a high rate. Because of the rising hydrogen demand in chemical companies and oil refineries across the country, the U.S. has the greatest market share in the area.

Enhanced level of forwarding integration, strong research and development, security of renewable energy power supply, and cost of storage are among the significant factors driving the competitiveness of the hydrogen energy storage industry. In June 2020, Cummins Inc. signed an agreement to form a joint venture with NPROXX for hydrogen storage tanks. The joint venture will continue under the name NPROXX. The joint venture aims to provide customers with hydrogen and compressed natural gas storage products for both on-highway and rail applications.

Some prominent players in the global hydrogen energy storage market include:

This report forecasts revenue growth at the global, regional, and country levels and provides an analysis of the latest industry trends and opportunities in each of the sub-segments from 2019 to 2030 For the purpose of this study, Grand View Research has segmented the global hydrogen energy storage market report on the basis of technology, physical state, application, and region:

How big is the hydrogen energy storage market?

What is the hydrogen energy storage market growth?

b. The Asia Pacific dominated the hydrogen energy storage market with the highest share of 37.53% in 2021. The presence of large market players along with favorable government policies providing subsidies and financial incentives to PV projects are among the key factors contributing to the industry growth in China.

Who are the key players in the hydrogen energy storage market?

What are the factors driving the hydrogen energy storage market?

b. Key factors driving the hydrogen energy storage market growth include wide application in mobile applications including vehicles for road transportation, stationary application for dispensing hydrogen at refueling stations, and at sites for stationary power generation.