One of the most popular renewable power generation technologies includes hydropower which does not cause any greenhouse gas emissions and toxic waste. After building a dam and installation of equipment the source of energy i.e. flowing water is free therefore making hydropower is one of the cheapest ways to generate electricity.

Installation of hydropower has registered stable growth, as it provides more reliable, clean, and affordable power demand as many countries pursue options to meet the carbon reduction goals due to the rise in environmental issues.

It is one of the cleanest fuel sources which get renewed regularly by rainfall and snow. Hydropower is readily available because according to the demand and requirement the flow of water can be controlled through turbines by engineers and the reservoirs may also offer recreational opportunities and activities such as boating and swimming.

Approximately one-fifth of the world’s total electricity is provided by hydropower. It is used by more than 60 countries worldwide to meet half of their electricity demand. Hydropower is also popular for a variety of reasons some of which include water management, flood control, and its ability to respond to fluctuating electricity demand.

Also, hydropower is considered to be the cleanest renewable technology for power generation which makes it even more attractive. Hydropower has been receiving enormous support from governments of various nations in the form of tax benefits and financial incentives around the world owing to such factors.

Currently, hydropower accounts for 20% of the total installed renewable power capacity, globally and is expected to increase its share over the next decade owing to rapid capacity additions mainly in emerging economies of China, India, and Indonesia. As per the International Hydropower Association (IHA), new hydropower of some 30 GW was empowered in 2012 which included pumped storage of 2 GW. The global hydropower market is expected to grow at a CAGR of 3.9% from 2014 to 2020

Key application segments covered in this report include industrial, residential, and commercial.

In July 2013, GE Energy announced to finance the GATI Infra for the hydropower project. 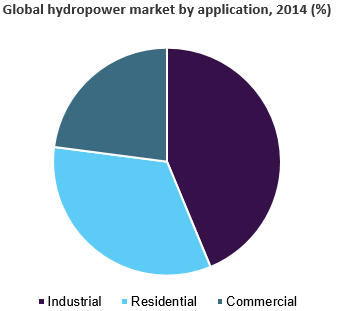 Industrial held the largest share of the market accounting for 44.8% in 2013 due to rapid industrialization in emerging economies of Asia-Pacific such as India and China.

China emerged as the single largest hydropower producing nation in the world and held the largest share of the market in 2013 at 24.61%. Besides, rapid capacity addition in China also makes it a favorable destination for hydropower generation. China alone accounted for more than half of the total hydro capacity installed in the year 2012 to meet its growing energy demand.

The hydropower market is also boosted by various government instruments such as Feed-I-Tariffs (FIT) and Renewable Portfolio Standards (RPS). North America is also expected to exhibit lucrative growth rates during the forecast period owing to the introduction of favorable regulations.

U.S. President Barack Obama passed the Hydropower Regulatory Efficiency Act and Small Conduit Hydropower Development and Rural Jobs Act in August 2013 which is expected to push the capacity of hydropower in the nation.

The bill aims to develop new or existing hydropower capacity to unlock the untapped market potential. There is a development of new hydropower which has been followed by huge investment in regions, notably Africa, Asia, and South America

This report forecasts revenue growth at global, regional & country levels and provides an analysis of the latest trends in each of the sub-segments from 2012 to 2020. For this study, Grand View Research has segmented the BIPV market based on technology, application, end-use, and region: