The global immersion cooling market size was valued at USD 154.5 million in 2020 and is expected to grow at a compound annual growth rate (CAGR) of 14.6% from 2021 to 2028. The increasing demand for cost- and energy-efficient cooling solutions from data centers is expected to drive the market over the forecast period. Companies are dealing with large amounts of data due to the explosion of the Internet of Things (IoT) & Artificial Intelligence (AI) that need higher density IT gear to work at an enterprise level. Various existing data centers cannot adjust new kinds of workloads, which has increased the demand for immersion cooling data centers as they use low power and optimize space. Data centers in the U.S. are moving to public and private cloud platforms at an increasing pace. 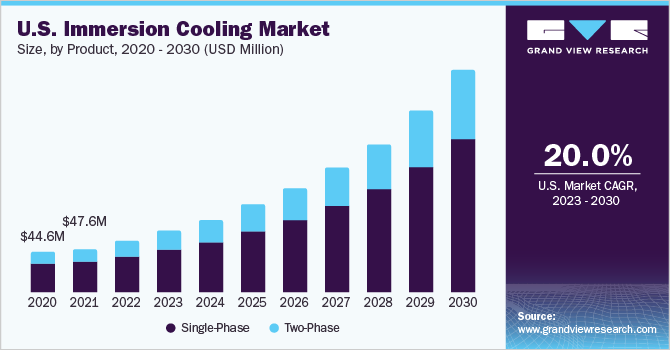 There are several advantages of moving to the cloud, such as improved scalability & elasticity, overall decreased operational costs, and reduced capital expenditure. Moreover, the large amount of data traffic and the emergence of big data has increased the importance of secure data centers. The Internet of Things Cybersecurity Improvement Act of 2019 was passed to safeguard the data and privacy of users implementing IoT devices.

Such initiatives are anticipated to drive the adoption of IoT devices, which, in turn, is expected to drive the demand for immersion cooling systems. Traditionally, data centers have relied on air cooling systems. As data center facilities deploy more equipment to meet the rising demands, energy consumption also rises, thereby increasing operational costs. Rising energy consumption boosts the power usage effectiveness, which is a major factor in measuring the energy efficiency of data centers.

The single-phase product segment led the market in 2020 with a revenue share of about 70%. In the case of single-phase immersion cooling, the cooling liquid has a high boiling point and remains in the liquid phase throughout the process. The two-phase system is similar to a single-phase system, with the only difference being the fluid changes from one state to another, i.e., from liquid to gas.

The two-phase product segment is expected to register the fastest CAGR of over 15% from 2021 to 2028 due to improved reliability, higher energy efficiency, lower maintenance requirements, and deployment flexibility offered by these systems. Power Usage Effectiveness for two-phase systems is 1.01, which is 5% lower than the single-phase systems making them a suitable cooling technology for hyperscale data centers.

However, the coolants used in the two-phase systems require high pressure as they transition to the gaseous phase. This needs complex systems with major safety systems, thereby augmenting the overall maintenance and operation costs of the cooling system. Furthermore, fluorinated fluids used in two-phase equipment are expensive, and so is their replacement due to loss compared to single-phase cooling systems.

The mineral oil segment accounted for the highest revenue share of more than 42% in 2020 and will expand at a steady CAGR from 2021 to 2028. Mineral oil provides improved efficiency, which further offers simplicity in the facility design compared to the traditional air-cooling systems, thereby offering cost benefits. Mineral oil is clear and has a high boiling point.

The ability of mineral oil to be mixed from different sources and batches provides flexibility during deployment and operations. It has been traditionally used as a dielectric cooling liquid for immersion cooling. However, factors, such as inconsistency in quality, low flash point, and material incompatibility have limited its adoption in the IT industry.

The demand for fluorocarbon-based fluids is likely to grow at the fastest CAGR of more than 16% over the forecast period. Majorly used fluorocarbon molecules in immersion cooling liquids include Perfluorocarbons (PFCs), Perfluoropolyether (PFPEs), Hydrofluoroethers (HFEs), and Fluorketones (FKs). Characteristics, such as high chemical & thermal stability, dielectric strength, and vapor pressure, aid the easy adoption of such cooling liquids for maintaining temperatures of the IT equipment.

Deionized-water cooling systems are used in a wide range of applications, such as electrical, nonelectric, metallurgy, research, electronics, and medical. The ability of deionized water to eliminate the risk associated with electrical arcing caused due to static charge in the cooling circuit and mineral deposits responsible for blocking coolant flow is expected to augment its demand as a cooling liquid in immersion cooling systems.

The high-performance computing application segment led the market in 2020 with a revenue share of over 35%. There are various operational benefits of using an immersion-cooling system in a high-performance computing environment, including lower latency, the potential for heat reuse programs in urban & industrial areas, faster deployment with edge-ready solutions, and the ability to cool chip densities essential for HPC and zero wastage of water. The cryptocurrency mining segment is likely to grow at a CAGR of over 16% from 2021 to 2028. Immersion cooling systems help reduce the operational and capital expenses of cryptocurrency operations as they require less energy to cool the systems. 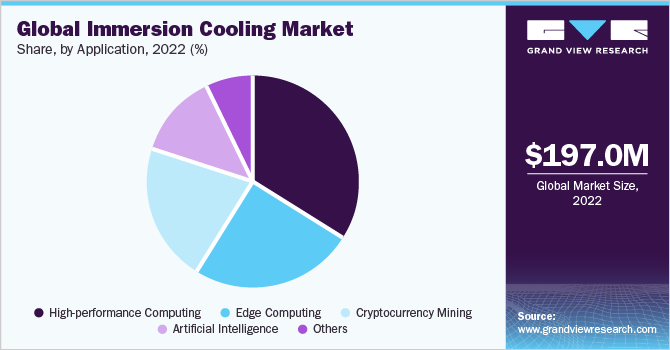 The edge computing segment is estimated to account for the second-largest revenue share by 2028. Immersion cooling systems support heavy workloads in smaller and limited spaces, where a conventional cooling system is unavailable or not practical. Moreover, such systems help in lowering the energy consumption of edge deployments. Deployment at the edge, where high-capacity power feeds may not be available, is easier with immersion liquid cooling.

The AI application segment is estimated to register the fastest CAGR from 2021 to 2028. Immersion cooling contributes positively toward reducing power and space density challenges. Furthermore, it helps eliminate the operating and maintenance costs of complex components, such as air handlers, humidity control systems, and chillers. These factors are anticipated to have a positive impact on the penetration of immersion cooling in AI applications.

North America led the global market in 2020 accounting for the highest revenue share of over 35% owing to the widespread presence of large-scale data centers. To keep up with the rapid growth of the digital economy, data centers in North America are investing in new high-performance computing servers that run at high speeds. Data centers are struggling to adapt to the consumer demand for more affordable hosting and colocation services. Data centers in North America are adopting advanced immersion cooling systems to solve these issues as they are highly efficient compared to traditional cooling systems. The ability of immersion cooling systems to reduce energy consumption as well as operational and maintenance costs is anticipated to augment its growth in the region.

Asia Pacific is expected to be the fastest-growing regional market over the forecast period. Businesses across various industries, anticipating future pandemic-like systemic disruptions, are increasingly focusing on IT scalability and resilience by deploying cloud and hybrid colocation solutions. In addition, in Asia Pacific, technology services companies, such as Platform-as-a-Service (PaaS) and Software-as-a-Service (SaaS), consider public cloud providers for their service offerings. These factors are expected to drive the demand for colocation data centers, thereby boosting the market growth over the coming years. In Asia Pacific, the demand for online schooling, video conferencing, social networking, and platforms to support remote working is increasing, due to the COVID-19 pandemic. These trends have further increased the demand for data centers, which, in turn, will drive market growth.

The market is highly competitive owing to the presence of both multinational and local manufacturers. Companies have undertaken several strategies including partnership, collaboration, new product development, and geographical expansion to gain a higher market share. For instance, in March 2021, Liquid Stack collaborated with Wiwyn to advance the IT infrastructure designed for 2-phase immersion cooling. Some of the prominent players in the global immersion cooling market include:

This report forecasts revenue growth at global, regional, and country levels and provides an analysis of the latest industry trends in each of the sub-segments from 2017 to 2028. For the purpose of this study, Grand View Research has segmented the global immersion cooling market report on the basis of product, application, cooling liquid, and region:

How big is the immersion cooling market?

What is the immersion cooling market growth?

Which segment accounted for the largest immersion cooling market share?

b. North America dominated the immersion cooling market with a share of 35% in 2020, owing to the widespread presence of large-scale data centers.

Who are the key players in the immersion cooling market?

What are the factors driving the immersion cooling market?

b. The key factors that are driving the immersion cooling market include a rise in global IP traffic and the demand for supercomputers and hyper-scale data centers worldwide, increasing investments in data center infrastructure, and rising number of data centers globally.