The global immersive virtual reality market size was estimated at USD 64.2 million in 2014. Immersive VR refers to the technology that blurs the line between the physical and the digital world, thereby creating a sense of being present in the virtual environment for the user. Numerous large corporations, such as HTC and Sony are venturing into this space. The launch of commercial VR headsets is expected to accelerate growth over the next two years. 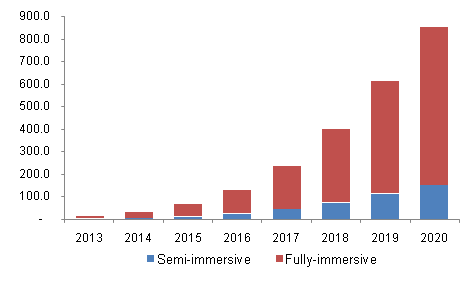 The proliferation of smartphones is expected to drive the growth of the industry, especially for mobile HMDs. Many companies that offer mobile VR headsets use third-party mobile device as the screen. This not only reduces the overall cost but also opens up avenues for mobile app developers. As the costs associated with the technology reduce, its application will witness exponential growth across industry verticals.

Technological development, the emergence of consumer VR, and reducing the selling price of devices are expected to drive growth over the forecast period. However, lack of content and health-related issues such as motion sickness, hygiene, and lack of comfort may restrain immersive virtual reality market growth.

The affordability of stereoscopic displays, motion tracking technology, and super fast GPUs enables devices to deliver high-performance at a reasonable cost. As HMD technology becomes more advanced, the field of view and display resolution will increase; while lag and device weight will decrease. Investments in R&D and the development of unique solutions are expected to propel the growth of the technology over the next five years.

Semi-immersive technologies are implemented by devices such as projectors, display walls, shutter glass, and motion devices that engage users in a partially immersive environment created by using a wide field of view to stimulate the feeling of immersion experienced by the user.

Fully immersive technologies offer a direct experience of virtual environments, wherein the user wears an HMD, which can provide stereo, bi-ocular, or monocular images. The technology is implemented by devices such as headsets, gesture recognition devices, and controllers, and is expected to witness sharp growth over the forecast period.

GTD is an essential component in the achievement of immersion, as users instinctively reach out with their hands and move around their body while being engaged in the virtual environment. The Leap Motion controller and other gesture tracking solutions available in the market are expected to be integrated into various headsets as a standard in the future. Companies such as Razer and Oculus have already integrated their GTDs into modified version of their respective products.

Key applications include aerospace & defense, wherein the devices are used for military training and flight simulation. Growth avenues among the consumer electronics sector include entertainment and gaming. Healthcare and medical personnel make use of the technology for diagnostics, simulation, and robotic surgery.

Advertising and retail also pose as promising growth sectors, especially for wearable devices in the advertisement, promotion, and launch of new products. Other applications mainly include industrial and education systems. Demand for technology in industrial, retail, and marketing, medical, and education is expected to boost considerably over the forecast period.

Technology development and commercialization are key priorities among vendors. The popularity and demand for VR HMDs have been significantly high since the launch of its development kit in 2013. Growth has been typically higher in developed economies, particularly the U.S., where a large number of vendors are based.

Major consumer electronics giants such as Sony, HTC, and Samsung have ventured into the sector to leverage on the latest addition to the wearable technology market. Oculus VR has been credited with pioneering the popularization of VR headsets among consumers. The company, founded in 2013, was acquired by Facebook in March 2014 for USD 2.1 billion in cash and Facebook stock.

Vendors in the technology space are highly diverse ranging from technology giants such as Facebook and Sony to start-ups such as FOVE or ANTVR. Manufacturers are constantly developing and enhancing the technology to make it more sophisticated and to integrate it with consumer-grade devices such as smartphones and tablets in order to minimize the unit cost.

How big is the immersive virtual reality market?

b. The global immersive virtual reality market size was estimated at USD 1.3 billion in 2019 and is expected to reach USD 1.9 billion in 2020.

What is the immersive virtual reality market growth?

b. North America dominated the immersive virtual reality market with a share of 50.1% in 2019. This is attributable to the presence of key vendors and technology giants, growing technological developments, and the rising popularity of HMD among consumers.

Who are the key players in immersive virtual reality market?

What are the factors driving the immersive virtual reality market?

b. Key factors that are driving the market growth include advancement in HMDs, a rise in immersive media spending, and increasing usage of VR for simulations.