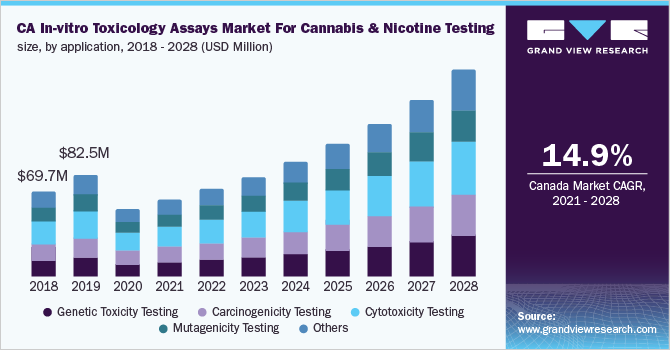 In addition, the rise in an adolescent population, which is more prone to use nicotine and cannabis-related products, will aid in market growth. Furthermore, the number of countries legalizing the use of medical cannabis is expected to increase in the coming years resulting in increasing usage of medical cannabis across the globe. The potential for significant tax revenues from cannabis is another factor that has resulted in an increasing number of counties legalizing its medical use.

In the past few years, awareness regarding medical applications of cannabis (marijuana), such as appetite enhancement, pain management, and reducing eye pressure, is increasing. Owing to this factor, the number of countries legalizing the use of medical cannabis in various parts of this world is continuously increasing. For instance, most U.S. states have legally approved the use and commercialization of medical cannabis and an increasing number of countries are legalizing the plant for recreational use.

The increasing incidence of nicotine consumption-associated diseases has triggered the launch of various policies and initiatives by governments and global organizations to increase awareness among people. For instance, the CDC has initiated a project for reducing the consumption of sodium and tobacco to prevent COPD and cardiac disorders in China.

In recent years, the use of cannabis products has expanded, leading to an increasing number of specialized cannabis testing laboratories. This intensified the market completion. For instance, with rigorous legislative requirements and high sample throughput, Laboratory Information Management Systems (LIMS) serve as a promising tool for a testing laboratory.

The nicotine testing segment dominated the market and accounted for the largest revenue share of 54.0% in 2020. This can be attributed to the presence of an effective regulatory structure for the safe consumption of nicotine-containing products. Rising consumption of tobacco and the growing focus of research studies on nicotine testing utilization are factors expected to expedite segment growth.

The cannabis testing segment also captured a significant market share as it is used for detecting the quantity of cannabis substances in samples. This testing aids in monitoring regulated cannabis products in the market. Rising acceptance of cannabis for medical use is further anticipated to boost the market growth throughout the forecast period.

Technological advancements in cannabis testing are driving the segment growth. For instance, a test developed by PathogenDx, QuantX assay, which is intended for cannabis and hemp, measures the total amount of yeast and mold in a sample, while also assessing whether it meets industry testing as well as safety standards. The test takes less than 6 hours to complete. QuantX is ideal for cannabis testing labs as well as growers whose product must withstand a certain level of yeast and mold contamination.

The mass spectrometry segment dominated the market and accounted for the largest revenue share of 25.9% in 2020. Increasing inspection by regulatory bodies will boost segment growth, as it assists in identifying unknown substances and quantify known substances. The rising focus of research studies on evaluating applications of mass spectrometry is aiding segment growth.

For instance, a research study published in the Journal of the American Society for Mass Spectrometry shared the current significance of mass spectrometry in the cannabis market. Experts emphasize on use of GC/MS and LC/MS/MS techniques in profiling terpenes and the detection of heavy metals, in addition to potency analysis and pesticide testing. This study also reports a few areas where mass spectrometry could be implemented or expanded.

The 3D cell culture technology segment is anticipated to grow at a rapid pace during the forecast period owing to the growing number of in-vitro toxicology laboratories in key regions and the increasing number of tests being conducted by them. Technological advancements in 3D cell culture technology to expand its application across various research studies are also driving the segment.

The cytotoxicity testing segment dominated the market and accounted for the largest revenue share of 27.2% in 2020. The segment is expected to continue its dominance over the forecast period. The rising significance of these testing methods in various technologies is considered to be a driving factor for market growth.

For instance, 3D cell cytotoxicity evaluation system technology can be used to assess cigarette smoke; this system offers faster results without any intervention of skilled force. Moreover, advancements in different tools, such as real-time cell analysis tool, which allows cytotoxic assessment of test substances, and the potential of such tools for evaluating the cytotoxic effects of nicotine-containing products is driving the segment growth.

The cellular assay testing method segment dominated the market and accounted for the largest revenue share of 58.8% in 2020 due to the rise in drug discovery screening to quantify cytotoxicity and other bio-chemicals. The launch of new products for cannabis-based medicine testing is further driving the market.

Advancements in cell-based assays are anticipated to positively impact revenue generation of the segment, owing to delivery of rapid and accurate results without any intervention of skill-force. For instance, Real-time Cell Analysis (RTCA) is a tool that enables rapid and relatively labor-free cytotoxic assessment of test substances. It is one such tool that has gained popularity as a result of its versatility, ease of use, and capacity to track cell state during an experiment. 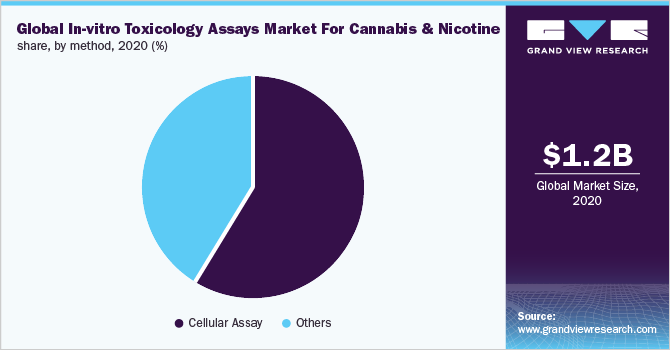 Other testing methods such as microbiological testing, including biochemical-based tests and molecular tests, for cannabis are performed in various laboratories. Considering the rising number of cannabis or nicotine-based products and the utilization of these products, the need for microbial detection has increased.

North America dominated the in-vitro toxicology assays market for cannabis and nicotine testing and accounted for the largest revenue share of 40.4% in 2020. This growth in the region can be attributed to the presence of a substantial number of market players and legalized usage of cannabis and nicotine for medicinal and recreational purposes.

High healthcare expenditure, well-established healthcare infrastructure, and stringent regulations by FDA and Health Canada are some other factors contributing to the dominance of the region throughout the forecast period. The presence of research institutions and projects backed by Health Canada is likely to boost the market by a small margin.

In Asia Pacific, the market is likely to witness the fastest growth over the forecast period. The legalization of cannabis and nicotine-related products is expected to be the key market driver over the forecast period. It is anticipated that India will be the fastest-growing market for in-vitro toxicology assays in the region. CBD and other cannabis-related products are picking up the pace in Indian industries, with 4 native CBD brands in India.

Advancements in products, regional expansions, and strategic initiatives are key strategies that can aid in market development. The operating companies are undertaking extensive strategic initiatives in the field of in-vitro toxicology assay in cannabis and nicotine testing, including mergers and acquisitions, new product development, and regional expansion, to address the unmet needs of consumers.

For instance, in July 2021, IONTOX announced a collaboration with cbdMD, Inc. to identify novel cannabinoids for therapeutic use. The company is expected to perform the required toxicological studies with cbdMD Therapeutics. Some of the prominent players in the in-vitro toxicology assays market for cannabis and nicotine testing include:

This report forecasts revenue growth at global, regional, and country levels and provides an analysis of the latest industry trends in each of the sub-segments from 2017 to 2028. For the purpose of this report, Grand View Research has segmented the global in-vitro toxicology assays market report for nicotine and cannabis testing on the basis of test type, technology, application, method, and region:

How big is the in-vitro toxicology assay market for cannabis and nicotine testing?

What is the in-vitro toxicology assay market for cannabis and nicotine testing growth?

b. The global In-vitro Toxicology assay market for cannabis and nicotine testing is expected to grow at a compound annual growth rate of 11.2% from 2021 to 2028 to reach USD 2.9 billion by 2028.

Which segment accounted for the largest in-vitro toxicology assay market for cannabis and nicotine testing share?

b. North America dominated the in-vitro toxicology assays market for cannabis & nicotine testing and accounted for the largest revenue share of 40.44% in 2020. This growth in the region can be attributed to the presence of a substantial number of market players and legalized usage of cannabis & nicotine for medicinal and recreational purposes.

Who are the key players in the in-vitro toxicology assay market for cannabis and nicotine testing?

What are the factors driving the in-vitro toxicology assay market for cannabis and nicotine testing?

b. Key factors that are driving the in-vitro toxicology assay market for cannabis and nicotine testing growth include increasing usage of cannabis for medical purposes, increasing awareness regarding the potential hazards of nicotine consumption, and growing adoption of high throughput techniques in cannabis testing.