The Indian consumer electronics market size was worth USD 32.5 billion in 2016 and is expected to grow further over the forecast period. India provides a worldwide opportunity for short to medium-term growth in consumer electronics spending. Minimal penetration rates, as against other upcoming markets, portray a better prospect to sell to first-time buying households, along with replacement devices to the middle class. 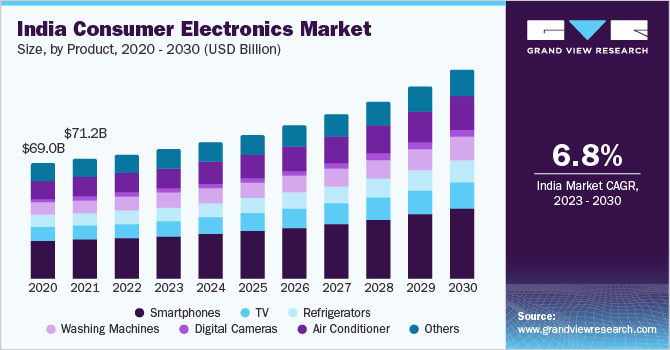 Growth in the Indian consumer electronics market can be attributed to increases in demand from households, changing lifestyles of individuals, easier access to credit, and rising disposable incomes. Intentional reduction by the Government in the import bill, coupled with government and corporate spending is anticipated to complement the positive demand in this market. The Indian consumer electronics sector has attracted several strong investments in the form of merger & acquisition policies practiced by key participants of the global market and other FDI inflows.

As per the Make in India initiative, Electronic Development Fund Policy has been approved, with the intention of rationalizing a transposed duty structure. Another effort, such as the Modified Special Incentive Package Scheme (M-SIPS) has been introduced to provide a CAPEX subsidy of nearly 15 – 20 percent. Consumer electronics manufacturers are set to elevate investments in production, distribution, and R&D in the next few years. With the rising presence of organized retail, the market has experienced the emergence of modern, durable retail chains, which include e-retailers such as E Zone, Reliance Digital, Tata Croma, etc.

High production in the Indian electronics market can be attributed to paced up demand for advanced computers, mobile phones, TVs, and defense-related electronics. The situation in this market mandates manufacturers to keep themselves updated with the latest technology, since it is eye-catching to typical consumers, and technological features play an apex role while selling to higher-income classes. The consumer electronics sector has witnessed the highest share in the total production of electronic goods in India.

Under the Union Budget for the financial year 2017, the government exempted certain components and parts, subparts for the production of set-top boxes for TV and internet and broadband modems. The introduction of artificial intelligence (AI) is set to project a bright future for the consumer, as well as industrial electronics in India.

India is likely to emerge as a potential future manufacturing hub for the region, provided the government shows adequate support and focus towards this sector. Specific factors anticipated to push the manufacturing in India are inclusive of, reduction in borrowing costs, export incentives, reduction of customs duties on raw materials and components, and improvement in the ease of doing business.

The increasing per capita income, burgeoning middle class, and increasing standard of living in the country is catering to a rise in demand for television sets. Promotion and advertisement activities carried out by leading industry participants such as Samsung have positively augmented the market growth, and this trend is expected to continue over the forecast period.

Rapid urbanization coupled with increasing disposable income in the country has contributed to a rise in demand for refrigerators. Due to the versatile and advanced refrigerators available in the market, the Indian consumers are replacing their existing and old refrigerators with new ones. In addition to this scenario, refrigerator selling retailers are adopting competitive strategies such as teaming up with financial institutes to provide easy financing options to sell their products. Such trends are expected to favor market growth over the forecast period.

The Indian refrigeration industry is characterized by increasing supply, novel product launches, and regulatory support from the government. Companies adopt competitive pricing techniques to gain market share. The increasing penetration of refrigerators in rural areas is a key industry scenario.

Set-top boxes are used in connection with television sets. The set-top box is used to translate the signal received from satellites and to further convert it to television content. India witnessed a rapid shift from analog signals to a set-top box in the recent past owing to the superior benefits of the set-top box as well as government policies. This rapid change towards the set-top box is expected to continue over the forecast period.

Set-top boxes offer inherent benefits such as better clarity of picture, ability to display a large number of channels, digital video recording as well as video on demand. The government of India issued regulations aimed at digitalization of the entire cable TV network in the country. These inherent advantages coupled with the rising sales of television sets in the country has benefitted the set-top box demand in the country.

The landscape of original design manufactures (ODMs) or original equipment manufacturers (OEMs) and local component suppliers in the Indian consumer electronics market is not mature yet, although emerging market participants of this industry have established a substantial local manufacturing base and in-house box-building assemblies and execute their manufacturing operations through a mix of local production and assembly.

India is presently serving as a strong foundation to contract manufacturers and OEM companies. These companies employ various processes at their facilities, which include, end-to-end contract manufacturing, in-house box assembly, and PCB building assembly, sheet metal assembly, and plastic injection molding. The majority of the OEMs and EMS usually undertake last-mile assembly, and a very limited portion of designing (R&D/ODM) is executed in the country.

This report forecasts revenue growth at a country level and provides an analysis of the industry trends in each of the sub-segments from 2014 to 2024. For the purpose of this study, Grand View Research has segmented the India consumer electronics market report on the basis of product: