India fluoropolymer market size was USD 99.3 million in 2014 and is expected to witness substantial growth over the forecast period owing to its increasing consumption in various sectors including chemicals & pharmaceuticals and electrical & electronics. Increasing demand for the product on account of its superior properties including low friction, unique non-adhesive properties, high heat, electrical, chemical, and weather resistance will propel growth over the next seven years. 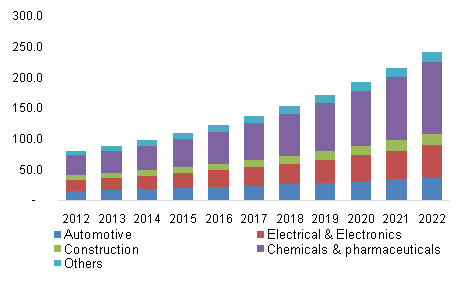 Growth of the pharmaceutical sector in India on account of rising government spending is expected to augment industry growth over the next seven years. However, increasing demand for substitutes including polyetheretherketone (PEEK), polyphenylene sulfide (PPS), polysulfone (PSU), and polybutylene terephthalate (PBT) is expected to hinder industry expansion over the forecast period.

India fluorosurfactant market is anticipated to witness high gains in the near future as a result of its growing demand in a wide range of applications including paints & coatings, electronics, cleaners, and firefighting foams. However, the presence of toxic substances such as perfluorooctanesulfonic acid (PFOS), and perfluorooctanoic acid (PFOA) is expected to restrict industry expansion in the near future.

Automotive was a prominent segment accounting for over 19.0% of the volume in 2014 and is expected to witness rise owing to increasing government spending along with the commencement of “Make-In-India” policy intended to increase overall production. In addition, growing product demand in fuel systems, power systems, automobile electronics, and transmission systems will stimulate growth over the next seven years. In addition, rapid economic development coupled with advancements in road construction is expected to promote industry expansion.

Paints & coatings was the largest application segment accounting for over 40.0% of the revenue in 2014. Growing demand for fluorosurfactant in paints & coatings on account of its high pigment wetting, levelling, and anti-blocking properties will drive the market in the near future. Growth of the sector in India on account of its increasing demand from automotive, and residential sector owing to urbanization will propel industry expansion.

Electronics are expected to witness significant growth at a CAGR of 8.9% from 2015 to 2022 in light of growing production of electronics hardware in India. In addition, various initiatives undertaken by the government which include Electronic Hardware Technology Parks (EHTPs), Special Economic Zones (SEZs) and foreign direct investment (FDI) to promote the sector will create immense market potential over the forecast period.

Technological advancements for industrial cleaning applications in the country will augment fluorosurfactant demand over the next seven years as it reduces surface tension, and offers high wetting of contamination.

In September 2015, Asahi Glass Company launched a low-melting adhesive fluoropolymer, Fluon LM-ETFE LH-800, with the ability to bond materials mainly in automotive fuel hose systems. Chemguard developed fire-fighting surfactants based on perfluorinated telomer chemistry. The products do not contain PFOS or PFOA. In May 2012, 3M launched FC-5120 for use in water-based coating formulations to enhance its wetting property.

Various technological developments by market players including 3M and Chemours in order to manufacture high-performance fluoropolymers and fluorosurfactants are expected to augment growth. Introduction of DuPont’s GenX technology, which aids production of effective fluoropolymers without the use of PFOA which will open new growth opportunities over the next seven years.