Global fluoropolymers market size was USD 5.0 billion in 2014. Rising demand for the polymer for manufacturing semiconductors which are used in electrical appliances including computers and smartphones is expected to drive growth. Growing electronics industry, particularly in China, South Korea, and Japan, in light of increasing domestic demand along with the presence of R&D base, is expected to augment growth in the near future.

Fluoropolymers are extensively used in numerous applications for various industries including automobiles, electrical and electronics, and chemical processing industries owing to its high heat resistance and excellent tensile strength. Expanding automotive sector in the U.S., Mexico, China, India, and Indonesia on account of new product launches by vehicle manufacturers such as GM, Toyota and Volkswagen is likely to impact favorably market growth in the near future.

The stringent framework to manufacture and use of fluoropolymers implemented by numerous regulatory bodies is expected to hamper industry growth. Perfluorooctanoic acid (PFOA) which is used as a raw material is deemed as carcinogenic by USEPA. Usage in a wide range of household products including stain-resistant carpets, non-stick cookware, and furniture sprays is a major source of PFOA contamination which is anticipated to hamper industry growth over the next seven years.

The aforementioned problems faced by automotive parts manufacturers are curbed by using fluoropolymers to meet unique design and regulatory requirements, which are expected to drive the market. The advantages of deployment of fluoropolymer include low processing temperature, ability to bond with hydrocarbon-based plastics, and optical clarity flexibility.

Fluoropolymers enhance the properties of coatings used in construction products, modern industrial equipment, and household appliances. The properties exhibited by fluoropolymer resins make them an ideal solution for applications requiring a reduction in friction and a high resistance to solvents, acids, and bases. The fluoropolymer resin coatings exhibit properties such as high chemical resistance, excellent thermal property, and high weather stability. The aforementioned properties have led to their increased popularity and are expected to continue over the forecast period.

In automotive and transportation application, fluoropolymer substrates widely used to protect interiors parts in order to increase cleanliness and durability. It is engineered with a low coefficient of friction to prevent materials from adhering to them. In addition, it is also used for lamination and coating of interior parts.

Fluoropolymer film products are sold at a premium price as they do jobs that other commodity films cannot do. In addition, they are used by specific application industries such as aerospace, automotive, construction, electronics, and packaging. Volume of fluoropolymer films is comparatively less and the market value in dollars is disproportionality high. Technology development can boost the demand for fluoropolymer films in major areas and largest application market including packaging. New and advanced barrier film structures with high performance films allows better appearance and longer shelf life.

The prices of the fluoropolymer films are high as compared to the traditional plastic films which may have negative impact on the growth of fluoropolymer film market. Price is a critical factor in supplier selection and a key determinant for gaining market share.

In terms of product, polytetrafluoroethylene (PTFE) market dominated the global fluoropolymers industry accounting for over 60% of overall volume in 2014. Enhanced wear resistance and chemical stability are key properties of PTFE, paving its way for use to manufacture gaskets, linings, washers, pump interiors, seals, and spacers in industrial applications.

Polyvinylidene difluoride (PVDF) is expected to witness the fastest growth and is expected to reach 408.0 kilotons by 2022. It is majorly used as an insulation material in electrical wires as it posses properties such as flexibility, low weight, low thermal conductivity, high chemical corrosion resistance, and heat resistance.

Growing importance of piezoelectric materials in electronics is expected to favor market growth for PVDF in the near future. Rising expenditure towards the development of PVDF-based architectural coatings by chemical manufacturers such as Solvay is expected to open new growth opportunities over the forecast period.

Construction is expected to be the fastest-growing application at a CAGR of over 11.0% from 2015 to 2022. Increasing construction spending in India, China, and the Middle East in light of supportive regulations to promote infrastructure development is expected to have a positive impact on the industry in the near future. 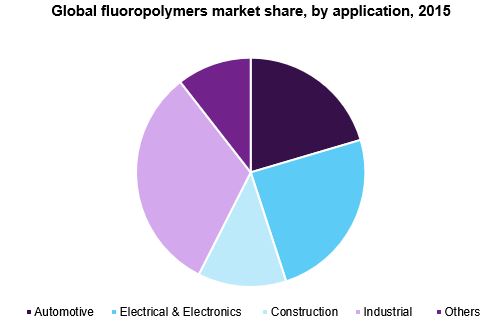 Demand from the automotive sector is expected to witness growth in light of its increasing proliferation in fuel engine systems to reduce emissions and provide heat resistance. The European Commission and the U.S. EPA have framed stringent regulations, pertaining to restrict VOC emissions, and this is likely to increase the importance of fluoropolymers in the automotive application.

Asia Pacific fluoropolymers market accounted for over 30% of global volume in 2014. Positive outlook towards the automotive and construction sectors in China, India, and Indonesia in light of supportive regulations to promote investments at a domestic level is expected to positively impact the industry.

China led the market in Asia Pacific region, on account development in commercial and residential buildings. Robust growth in packaging industry in the country on account of changing demographics such as increasing income level, changing lifestyle and consumption of wide range of packaged products is propelling the market growth

North America market was over USD 274.8 Mn in 2014 and is likely to witness growth in light of expanding manufacturing base for automotive, construction and electronics sector in the U.S. Emergence of Mexico as an automotive hub along with growing demand for PVDF as a piezoelectric material in wire and cable insulation is expected to support industry growth in the near future.

Growing economic development in the region along with increasing demand from various applications such as automotive and electronics is fueling the demand for fluoropolymer films over the forecast period. In automotive industry, fluoropolymer films are extensively used for environmental protection and long aging of vehicle components. These vehicle components include power train, exhaust systems, fuel systems, transmission systems, and chassis.

Lucrative construction sector growth in African countries such as Nigeria and South Africa on account of regulatory support to improve infrastructure as well as positive mining industry outlook is expected to favor positive growth in the near future.