Technological innovations have made it possible to replicate the natural sheen or luster of oyster pearls, at a low cost with synthetic, or mica based substrates. Increasing R&D efforts by regional companies such as Sudarshan Chemicals have also contributed vastly to the development of unique paints & coatings with pearlescent effects.

The industry, in the recent past, has benefited from high GDP growth rate and rising consumer disposable income that led to increased passenger car sales. The trend towards applying high luster paints on passenger cars is expected to further drive growth in automotive coatings.

India is ramping up pigment production facilities to meet the growing demand from burgeoning end-users. Furthermore, the country witnesses spirited festival celebrations on a regular basis, which is a major influence on consumption patterns in several end-use industries such as interior decorative paints, printing inks, paperboard, textiles & consumer goods.

Governmental support in the form of tax incentives & subsidy schemes to encourage domestic manufacturing sector, such as the launch of the ‘Make in India’ initiative is also likely to promote industry growth over the forecast period. Certain product limitations are expected to hamper growth since the product can tolerate baking temperatures of only up to 600o C (315o C), without sustaining significant damage in terms of mechanical integrity or optical properties.

Thus, not all organic pigments can be utilized for coil coating applications, especially for industrial applications that require long-lasting color & durability. However, newer processing methods such as the ‘bonding’ technique have been developed to overcome such limitations, which may improve the application scope over the forecast period.

India’s burgeoning population has provided a stimulus for the development of technologically advanced waterborne coatings. Hence, the government has invested in the paints & coatings industry in the past few years, which has led to pearlescent pigment market development. Increase in residential infrastructure is also expected to indirectly influence the architectural coatings market and, hence, the pearlescent pigments industry.

Economic growth in adjoining emerging economies such as China, South Korea, and Japan is expected to provide lucrative opportunities for pearl pigment exporters from India. In addition, multinational players are venturing into the region on account of factors such as favorable government & political support along with low labor costs.

Iron/ferric oxide dominated the industry, in terms of volume, with a global share of over 36% in 2015. The substrate has gained wide acceptance in the cosmetics sector, on account of its ability to create lustrous & opalescent effects in all types of cosmetics and personal care products.

However, the titanium dioxide (TiO2) mica segment accounted for USD 22.95 million in 2015 and is expected to grow at the highest CAGR of 5.1% from 2016 to 2024. TiO2 mica is a widely utilized raw material, since this substrate lends an uncharacteristically attractive sheen & high luster, at a relatively low cost.

Other pigments crafted from a combination of the above two and other materials such as bismuth oxychloride are also gaining favor in the industry, owing to their outstanding performance characteristics & reliability.

Paints & coatings emerged as the dominant application segment, owing to the pigment’s long life with good hiding power & high luster in the automotive, construction, & industrial applications. The segment occupied 34.21% of the volume in 2015 and is expected to grow at 5.3% CAGR from 2016 to 2024.

Decorative paints & coatings dominated the aforementioned segment since the product is increasingly being utilized to impart colorful effects during the seasonal festivities. The growing construction sector of India is also projected to positively influence the growth of this segment. 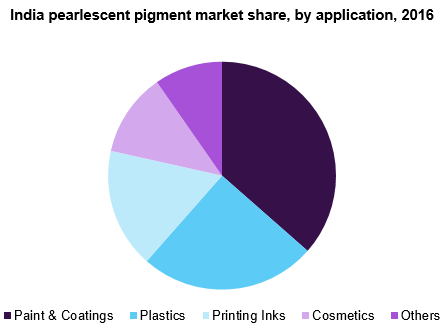 Transitioning consumer lifestyles have also prompted the consumption of these special effect pigments in color cosmetics & even some personal care products. The segment revenue is estimated to grow at a CAGR of 3.3% over the forecast period.

The industry is currently in a nascent stage of development, with a few major players dominating the Indian landscape. Indian companies such as Sudarshan Chemicals, FX Pigments, Dev Tech, and Kolortek Industries are vying for a larger chunk of the market against international players such as Merck Performance Materials, BASF S.A., and Valspar Coatings.