The Indonesia crop protection chemicals market size to be valued at USD 1.2 billion by 2025 and is expected to grow at a compound annual growth rate (CAGR) of 5.6% during the forecast period. Indonesia is one of the major agricultural markets in the Asian continent owing to the presence of fertile lands and suitable weather conditions. Increased emphasis on crop yield, as a primary tool to achieve food security, has been a major factor in driving the demand for crop protection chemicals. 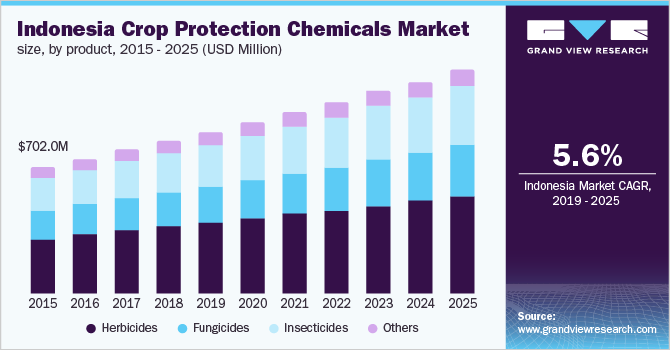 The constantly growing population in the Indonesian market has forced the government to undertake various initiatives to achieve the self-sufficiency of food. The expansion of arable land and improved farm techniques have resulted in extensive usage of crop protection chemicals in the country. Indonesia is the largest producer of palm oil and the fourth-largest producer of coffee globally. However, crop protection chemicals are highly consumed in the production of rice.

The agricultural sector in Indonesia is divided into large plantations and smallholder productions. The large ones typically focus on the production of export commodities, such as rubber and palm oil, whereas the smallholders cultivate horticulture crops including soybeans, maize, rice, fruits, and vegetables for local consumption. Farmers in the Indonesia market majorly rely on cheaper protection chemicals to treat their farmlands and engage in redundant farming practices. This practice is mainly followed owing to factors including access to utilities (such as water and electricity) and general awareness among the agricultural industry regarding the adverse effects of harmful chemicals on soil fertility.

There is a strong relationship between the usage of crop protection chemicals and income levels of farmers in the Indonesia market. In that sense, losses owing to pest and weed attacks on crops are directly reflected in profit/loss attained by the farmers. It is believed that about 25% of the yield can be destroyed during storage and transportation owing to the lack of safeguards. Therefore, it is highly critical to consider crop protection solutions at both the stages including protection during crop production and improving farm productivity.

Along with the basic crop cultivation, farmers in the Indonesia market are also focusing on horticulture. To increase revenue from exports, the Indonesian market focuses on the production of palm oil, cocoa, coffee, and cassava. The country develops these crops with high-quality standards applied by international regulatory bodies to increase the GDP. These factors are thus promoting the precision agriculture industry, which has a positive impact on the Indonesia crop protection chemicals market.

Farming across the globe is largely influenced by climatic changes, which not only affect productivity but also the cost of produce, especially rice. Indonesia has a Hungry Season, wherein owing to the dry summers, rice fields are hampered causing a price hike. Sometimes a delay in monsoon also creates difficulty to manage the agricultural yield. World Bank has estimated that the climate in Indonesia will rise by 0.8ºC by 2030 and create a delay in the monsoon season. These factors are anticipated to fuel the utilization of crop protection chemicals in the market.

The market for crop protection chemicals in Indonesia is driven by the increased demand for the crop and chemicals required for protection from germs, viruses, and harmful bacteria. The demand has been sparked by rising population and crop production, and the inadequacy of the land farms for the farming of these crops, such as rice, is constantly leading to market growth.

Furthermore, the adoption of new farming practices and the requirement to maintain food safety and quality are expected to lead to progression in the industry. Insecticides are the main products that are utilized by farmers to ensure crop protection. The country is assumed to be the largest palm oil producer and coffee manufacturer in the world and contributes to the production of rice. Thus, the major focus of the farmers on horticulture is a vital factor within the agricultural industry, supporting the growth of the Indonesia crop protection chemicals market. Besides, the increasing health concerns among humans and animals are anticipated to drive demand for plant growth regulators, which ultimately has an impact on the market growth.

The market for crop protection chemicals is impacted by inefficient crop production as farmers have limited access to capital and the lack of updated infrastructure restricts the growth of the market. In context to the agriculture system of the country, regulation restrictions, transportation, and education of the farmers are the major factors influencing the production and protection of crops. Disparities in the food prices, along with the geographical challenges, are expected to restrain the growth of the market during the forecast period. However, there are emerging opportunities for the market to attain growth in the future.

The governmental initiatives provided through the awareness about green and energy-saving products, in the commercial projects are anticipated to increase the adoption rates of the solar LED light products. For example, Pacific Gas and Electric Company (PG&E), has extended financial assistance by providing interest-free loans, to the customers investing in the non-residential projects, ensuring use of the solar LED lighting.

The growing awareness about food waste, strong social capital, and support from the local government, are providing huge opportunities for crop production, and their protection using chemicals. Moreover, advanced farming techniques are implemented by the Ministry of Agriculture (MOA), in Indonesia, which includes three types of farming- organic, indoor, and vertical farming. For attaining the targets, the government has increased its investment level to support farmers, enhancing crop yield and returns from the produce. Thus, the government must take initiatives to support growth in horticulture, and crop production, to lead to growth over the forecast period.

Different combinations of pesticides are used for the efficient growth of crops. Herbicides and insecticides are predominantly used in the agricultural sector in Indonesia for crop protection. Herbicide products dominated the market for crop protection chemicals in the country with a revenue share of 44.1% in 2018. The demand for these chemicals in the market is driven by their high usage in the cultivation of staple products such as rice, maize, and sugar. The demand for crop protection chemicals is further augmented by rising instances of aquatic weed that is spreading vigorously in these regions owing to the tropical climate and damp lands.

Meloidogyne graminicola also called rice root-knot, is one of the major threats for the rice plantation, which is eradicated with the help of nematicides. So far, over 26 nematodes affecting plants such as ginger, tobacco, coffee, and black pepper have been discovered in the Indonesia market. These nematodes affect a large number of crops, which have led to significant growth in the demand for crop protection chemicals.

Insecticides in Indonesia are usually applied by the foliar spraying method. Regent and Baycarb by Bayer and Virtako by Syngenta are the most preferred insecticides in the country. The Green Leaf Hopper, Stem Borer, Gall midge, Whorl Maggot, Leaf Folder, White Backed Plant Hopper, and Brown Plant Hopper are the common insects attacking the rice plant.

Indonesia has a rich topography with vast fertile lands and suitable weather, which benefits the cultivation of tropical crops. Agriculture is the main occupation of the rural regions and a strong contributor to the overall GDP. Thus, a wide range of agriculture, horticulture, and livestock farming activities are practiced in the country. This translates into increased demand for crop protection chemicals in the market. 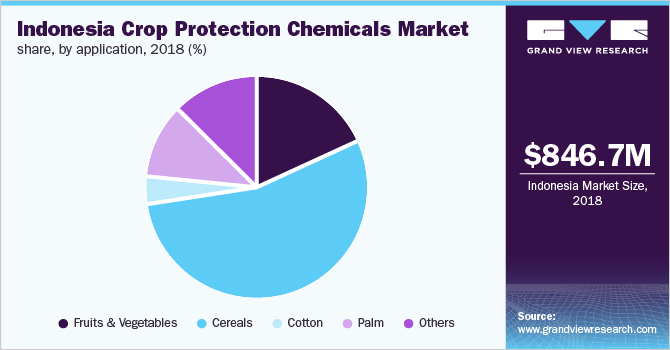 Fruits & vegetables require varying amounts of protection chemicals based on their type. The segment is expected to progress at a CAGR of 6.3%, in terms of revenue, from 2019 to 2025. The growing trend of producing global and exotic fruits & vegetables have added to the demand for agro protection chemicals. The majority of these crops are consumed directly by the customers and hence have various restrictions regarding the amount of pesticide usage.

The extensive demand for palm oil has resulted in the replacement of many small-scale farmlands in the Indonesia market for the cultivation of palm oil. The export of this crop generates high revenue for the country. The palm plantations are prone to various diseases such as brown germ, seed rot, and Ganoderma basal stem rot. Glufosinate-ammonium is a weed, which constantly grows around the palm crops and can be managed by the application of herbicides.

Nusa Tenggara Barat and Nusa Tenggara Timur are the fastest-growing provinces in the region owing to the rise in fruit cultivation. The government intervention to increase food production is expected to further increase the consumption of crop protection chemicals over the forecast period. The rising global demand for exotic fruits grown in the tropical region is expected to boost market growth.

The agriculture in East Java is majorly rice and corn that feeds around 25 million population in the South Pacific. The province accounted for 15.0% of the overall market revenue in 2018. Diseases and pests continue to pose a risk to agricultural production in East Java. Trips, corn borers, moths, and downy mildew are the well-known pests that cause an infestation. Farmers majorly use a mixture of insecticides and fungicides to tackle the rising problem of pests to ensure crop protection.

Major companies operating in the production of crop protection chemicals in the Indonesia market include BASF, Bayer CropScience, Dow AgroSciences, PI Industries, Cheminova, and Hansen. The companies in the market focus on collaborations, greenfield investments, joint ventures, acquisitions, and new product development. In August 2018, BASF opened AgSolution Farm in collaboration with the University of Jember to support new agricultural researches in the country.

This report forecasts revenue growth at the country level and provides an analysis of the industry trends in each of the sub-segments from 2014 to 2025. For this study, Grand View Research has segmented the Indonesia crop protection chemicals market report based on the product, application, and province: 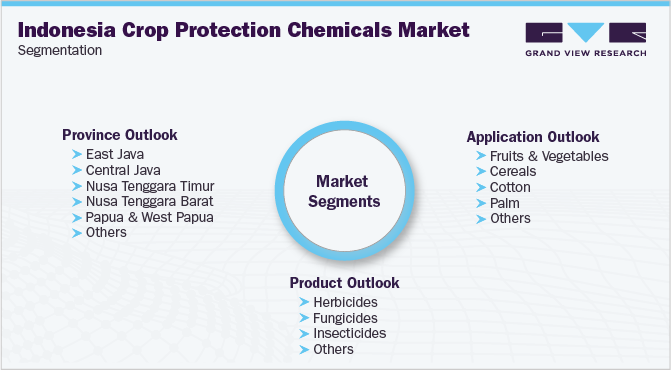 How big is the indonesia crop protection chemicals market?

What is the indonesia crop protection chemicals market growth?

b. Herbicides dominated the Indonesia crop protection chemicals market with a share of 44.1% in 2019. This is attributable to high usage in the cultivation of staple products such as rice, maize, and sugar.

Who are the key players in indonesia crop protection chemicals market?

What are the factors driving the indonesia crop protection chemicals market?

b. Key factors that are driving the market growth include growth in agricultural production and rise in cultivation of palm in Indonesia.