The global industrial boilers market size was valued at USD 13.4 billion in 2018 and is estimated to grow at a CAGR of 4.5% from 2019 to 2025. Rapid industrialization and growing food & beverage industry are expected to drive the market growth over the forecast period. Moreover, stringent laws to regulate harmful emissions in the environment are likely to boost the adoption rate of industrial boilers, in turn, triggering the demand for the product.

Industrial boilers are used by multiple industries including food & beverage, petrochemical, power, and chemical. Boilers produce steam, which is used to carry out industrial heating processes. The steam that is produced is transferred to the area of operation through pipes. In order to produce steam, boilers use different types of fuels including oil & gas, fossil, non-fossil, and biomass. 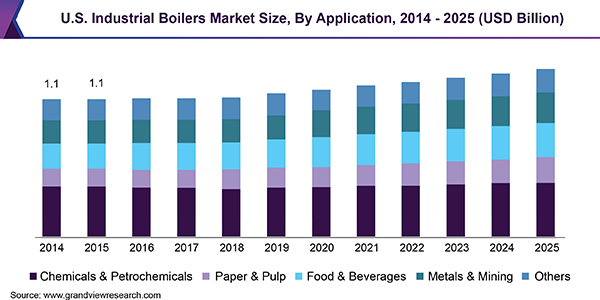 The U.S. accounted for the largest share in the North America market in 2018. High disposable income and increasing population have boosted the growth of numerous industries including food & beverages, textile, and FMCG. In order to fulfill the increased demand, companies are not only expanding their existing manufacturing units but also setting up new industrial plants, which, in turn, is boosting the product demand.

Rapidly growing petrochemical industries in developing economies including China and India are likely to boost the demand for industrial boilers. The demand is expected to rise further owing to growing investments to develop mega power projects, especially in developing countries. Industrial boilers are widely used in chemical & petrochemical industries, which account for the largest share in the overall market.

The Environmental Protection Agency (EPA) has set national emission standards pertaining to air pollutants released by industrial boilers. Strict standards imposed to regulate harmful emissions in the air will result in the enhancement of existing products, which is further expected to boost the market. New and improved products are also expected to boost the adoption rate of industrial boilers over the forecast period.

Paper & pulp application segment is anticipated to grow at the fastest CAGR of 6.1% over the forecast period. It is expected to be one of the fastest-growing application segments on account of growing pollution and rapid industrialization in developing countries including India and China. In addition, implementation of stringent regulations concerning harmful emissions in the environment is likely to fuel the product demand. 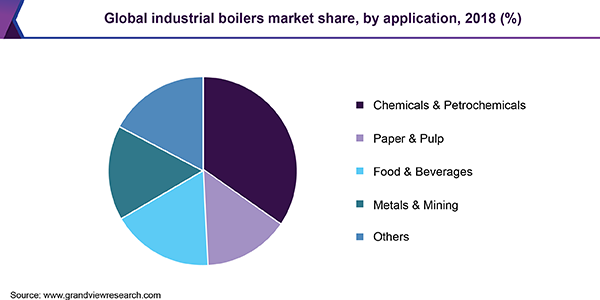 Chemicals & petrochemicals application segment dominated the market in 2018 and is expected to retain its top position over the forecast period. Food & beverages segment grabbed the second-largest share of the market in 2018. The segment is expected to retain its position over the forecast period owing to increasing demand for food products.

Based on fuel, the market has been segmented into oil & gas, fossil, non-fossil, and biomass. Different types of fuels are used by industrial boilers to produce steam to carry out industrial processes. Fossil fuel includes natural fuels such as coal, bitumen, and tar sands, whereas non-fossil fuel includes fuels that are not naturally available including solar and wind.

Biomass fuel segment was the second-largest segment in 2018 and is expected to witness the highest growth rate over the forecast period owing to strict regulations regarding harmful emissions into the atmosphere. Biomass fuel releases low harmful gases into the environment, which is expected to boost the demand for the product, especially in developed economies. Biomass fuel includes numerous organic materials including wood, rice hulls, bagasse, and tobacco stems.

Europe was the leading regional market and accounted for 34.1% revenue share in 2018. The region is expected to dominate the industry on account of several factors including rapid industrialization and growing industries including FMCG, food & beverages, and power. Moreover, strict regulations established by the European government pertaining to harmful emissions in the environment are expected to boost the demand for the product.

Asia Pacific was the second-largest market in 2018 and is expected to reach USD 6.3 billion by 2025 owing to the development of mega power products and environmental protection laws and the increasing demand for food products. Mega power projects in developing countries, especially China and India, are likely to boost the demand for industrial boilers in Asia Pacific.

Central & South America market is anticipated to grow at the fastest CAGR of 7.3% over the forecast period owing to increasing industrialization. In addition, growing food & beverage industry is likely to boost the demand for industrial boilers in developing economies, especially Brazil. The Central & South America market is expected to account for 12.1% revenue share of the global market by 2025.

The Brazilian market is expected to be the fastest growing over the forecast period. Rapid industrialization in the country has resulted in growing investments in numerous sectors including automotive, agribusiness, oil & gas, and renewable energy. Brazil’s revenue is expected to increase over twofold from USD 384.0 million in 2018 to USD 907.5 million over the forecast period.

The industry is highly fragmented with the presence of a large number of participants across the value chain. However, industry giants such as Thermax Ltd., Siemens AG, Bharat Heavy Electricals Ltd., and Forbes Marshall account for a major share of the market.

This report forecasts market share and revenue growth at the global, regional, and country levels and provides an analysis of industry trends in each of the sub-segments from 2014 to 2025. For the purpose of this study, Grand View Research has segmented the global industrial boilers market report based on application, fuel, and region: