The global ingestible sensors market size was valued at USD 491.0 million in 2016 and is anticipated to witness a CAGR of 19.1% during the forecast period. Technological advancement and growing prevalence of chronic disorders are some of the major factors driving the market. Need for medical adherence and increased healthcare awareness among people are also likely to boost the market growth. 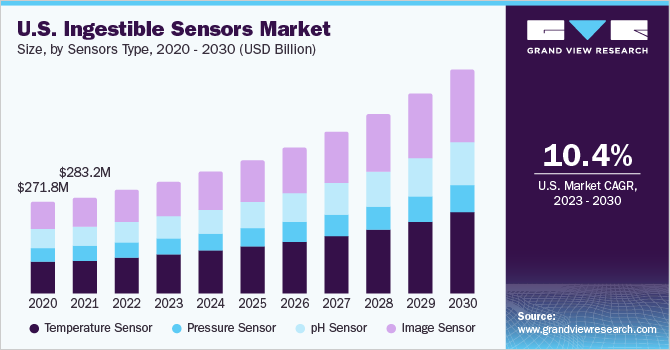 Extensive product usage in various medical applications including modified drug delivery is another major factor contributing toward the market growth. These devices are non-invasive and have a user-friendly design that assists in real-time diagnosis and health monitoring. Increasing cases of complications caused due to various chronic diseases, as a result of negligence toward the prescription by patients, have also boosted the product demand.

According to CDC, in 2015, around 30.3 million Americans (9.4% of the U.S. population) had diabetes and the number is expected to rise in the near future. According to the National Cancer Institute, in 2016, an estimated 1,685,210 individuals were expected to be diagnosed with cancer. Thus, there is a high demand for advanced medical products to control and manage various chronic diseases.

Stringent government regulations and need for expensive technology are some of the factors that could hinder the growth of this market. The product designing and development is an expensive method and requires advanced integrated technologies along with high-end R&D infrastructure.

Moreover, strict guidelines are set by different regulatory authorities to uphold the safety and effectiveness of a proposed medical product. There are various regulatory bodies such as the U.S. FDA, European Medicines Agency, and China FDA with different regulations that make the approval process of new products highly time-consuming.

Major component types include sensor, data recorder/wearable patch, and software. The sensor segment was the largest revenue generator in the past due to huge R&D investments and new product launches. For instance, in 2017, the U.S. FDA approved the first digital pill that comes with an ingestible sensor. The pill along with the sensor was jointly developed by the Otsuka Pharmaceutical and Proteus Digital Health. These devices offer remote access to health records and chronic disease management, which proves to be a promising factor for improved quality of health and reduced expenditure.

This technology also helps reduce hospital visits and re-hospitalization, along with round-the-clock remote monitoring, thereby allowing patients to recover within the comforts of their own home. The software segment is expected to witness lucrative CAGR during the forecast period. This growth can be attributed to the continuous efforts by manufacturers to introduce advanced software to offer more effective ways of disease control and management.

As stated by the Canadian Diabetes Association, the prevalence of the disease is growing in Canada and it is said to affect around 5.0 million individuals by 2025. Thus, increasing incidences of chronic diseases such as diabetes, cancer, arthritis, Alzheimer’s disease, chronic kidney disease, and chronic pain is expected to boost the segment growth.

These products are widely used in the medical sector where they help diagnose diseases and monitor patient health. In contrast to invasive techniques, which require meticulous procedures and surgical interventions, ingestible sensors allow simplified monitoring of various parameters such as temperature, pressure, and pH.

They are also used for several other applications such as capsule endoscopy and controlled release of drugs. They also notify physicians about drug interactions and the usage of particular drugs by patients, thereby improving medication adherence. These additional advantages have further fueled their demand in the medical vertical.

Another major field of application is sports and fitness. Constant observation of blood pressure and melatonin levels along with other essential body statistics is required to assess the health of players and athletes. They also help athletes monitor food interactions and record relevant data precisely without having to use invasive techniques. All these factors are boosting the product demand in this field.

They are also used in other areas where the study of the internal anatomy is required. Individuals working in extreme conditions such as firefighters and defense personnel are also required to have a constant check on body temperature and other essential parameters, which is also augmenting the market demand.

Temperature, pressure, pH, and image are the major product types within the ingestible sensors market. In terms of revenue, temperature sensors led the type segment in 2016. It is a widely used technique in different verticals such as healthcare and aerospace to measure body temperature in patients and astronauts respectively to detect any drastic temperature changes that might prove fatal if undetected.

The investments in product R&D is higher in developed countries than in emerging regions because of its high-cost technology, availability of well-equipped labs, and early adoption of advanced medical products in developed regions.

The image sensor segment is projected to grow at a lucrative CAGR during the forecast period due to its growing adoption in the healthcare sector. Healthcare professionals can view clear images of various tissues and organs inside a patient’s body by using these sensors, which allows accurate diagnosis of critical diseases.

Pressure sensors segment is also projected to have significant growth during the forecast period owing to its advantages in the management of respiratory and cardiac diseases. It allows precursors of cardiac problems to be identified and communicated to the patient beforehand allowing fatal problems to be avoided.

North America has been the leading regional market owing to technological advancements and availability of sophisticated infrastructure. Innovations in the field of science and technology that resulted in the development of tiny camera pills, which are widely used in these products, are likely to boost region’s growth. Rise in chronic and gastrointestinal diseases is also said to be a key factor driving the region’s expansion.

Europe followed closely behind North America, in terms of market revenue. With this region also being advanced in science and technology, the designing of innovative medical devices has been a forefront for many local companies. This factor is contributing toward the regional expansion. Other key growth-driving factors include rising cases of chronic diseases, growing geriatric population, and availability of easy reimbursement options.

The Asia Pacific region is anticipated to witness the highest CAGR during the forecast period owing to increase in healthcare expenditure and rise in chronic diseases. Heavy investments by top companies in R&D are also likely to contribute toward regional growth. Countries like Japan, India, and China are expected to lead the region with increasing adoption of these medical devices for diagnostics and therapeutic purposes. Increased cases of lifestyle-related diseases caused by physical inactivity and unhealthy eating habits are also likely to boost product demand in the region.

Companies in the global market include Proteus Digital Health, Inc.; Microchips Biotech, Inc.; CapsoVision, Inc.; H.Q., Inc.; Given Imaging; and Olympus Corp. New entrants in this market are offering similar product prototypes at lower prices, which may cause hindrance to well-established companies. Collaborations and M&A are the key strategies followed by most of the companies to gain maximum market share.

For instance, in April 2016, MC10 and PCH entered into an exclusive partnership to commercialize MC10’s Wearable Interactive Stamp Platform. In other such instance, Teva and Microchips Biotech entered into a partnership in June 2015 to enhance patient outcomes through digital drug delivery technology. Novel product developments often allow companies to gain a first-mover advantage in the market.

This report forecasts revenue growth at global, regional, and country levels and provides an analysis of the latest industry trends in each of the sub-segments from 2013 to 2024. For the purpose of this study, Grand View Research has segmented the global ingestible sensors market report on the basis of component, sensor type, vertical, and region: