The global inorganic catalyst market size was valued at USD 25.50 billion in 2021 and is expected to expand at a CAGR of 3.3% from 2022 to 2030. Inorganic catalysts are also used in the form of vanadium oxide to produce sulfuric acid. Growing production of sulfuric acid on account of its increasing demand in oil refining, wastewater processing, and chemical synthesis is expected to fuel the growth. 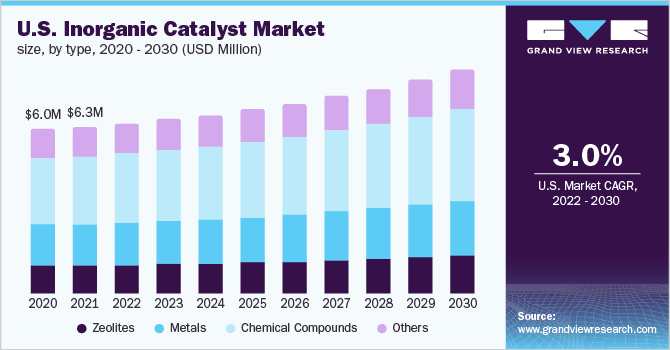 They are used in transesteriﬁcation of palm oil with methanol into biodiesel, production of ethyl acetate from ethanol and acetic acid, dehydration of D-xylose into furfural, and cellulose hydrolysis among various other applications. Its benefits include simple separation of catalyst from products, economical usage, and ease of application among others. Further, gaining acceptance of inorganic catalysts over their organic counterparts for biodiesel production is likely to accelerate the industry growth during the forecast period.

Growing demand for petroleum and petrochemical products is expected to result in increased product demand as they are an important component in the former's synthesis. Increasing demand for energy coupled with the growing emphasis on green technologies has constituted catalysts in playing an exquisite role in petroleum refining operations.

Growing production of ammonia for fertilizers (where the iron-based heterogeneous catalyst is used extensively), on account of new product development such as nitrogenous fertilizers, coupled with agriculture industry growth in India and China is expected to fuel the demand for heterogeneous catalysts in the coming years. Growing emission control regulations worldwide are triggering the need for efficient and environmental conservation sensitive processes with high yield, which has steered the demand for catalysts in different applications in order to improve process efficiency.

In addition, gaining the importance of ammonia as an alternative to CFC compounds in refrigeration applications is expected to augment the growth of the heterogeneous catalyst segment in the forecast period. Moreover, the European Catalyst Manufacturers Association (ECMA) is primarily focused on the development and usage of inorganic catalysts containing metal oxides and metals based on nickel, chromium, copper, cobalt, titanium, and molybdenum. These metals are employed in a wide range of industrial applications including refinery operations, fine chemicals, pharmaceuticals, edible oils, and polymers.

The chemical compounds segment dominated the inorganic catalyst application with the highest revenue share of 40.6% in 2021 and is expected to exhibit a CAGR of 3.5% in the forecast period. Its high share is attributable to its increasing use in the manufacturing of polypropylene and polyethylene. The low manufacturing cost of chemical compound-based catalysts when compared to zeolites and metal-based catalysts and their expanding application scope in emerging markets of India and China are expected to propel the production and consumption of chemical catalysts in the coming years.

Metal catalysts are used in downstream industries to convert saturated compounds such as alkanes to olefins, which are further processed to manufacture numerous polymer compounds. The metals providing the function of dehydrogenation and hydrogenation are noble metals, non-noble metals, and others. Major products produced in refineries using metal catalysts in the hydrocracking process are diesel, jet fuel, LPG, and high-octane rating gasoline fractions.

The zeolites segment is anticipated to reveal a CAGR of 3.1% during the forecast period and is widely used as adsorbents and catalysts owing to the porosity and large surface area. The most used zeolites include analcime, chabazite, natrolite, clinoptilolite, heulandite, phillipsite, and stilbite. The adjustable acidity and high porosity are the key properties on account for which zeolites are used as catalysts in refining and petrochemical production. It plays a key role in enhancing the rate of reaction in hydrocracking and fluid catalytic cracking (FCC).

The environmental segment dominated the inorganic application and accounted for 30.0% revenue share in 2021 and is expected to exhibit a CAGR of 3.3% in the forecast period. Its high share is attributable to its ability to help in the production of low-polluting refrigerants. These are majorly used in all industries to treat effluents released so as in reducing the environmental impact. Inorganic catalysts help in reducing vehicle-generated air pollution. They reduce emissions of nitrogen oxides, hydrocarbons, and carbon monoxide and are an essential part of car converters. With increasing limits on vehicle emissions, demand for catalysts in light and passenger vehicles is bound to increase at a significant rate. 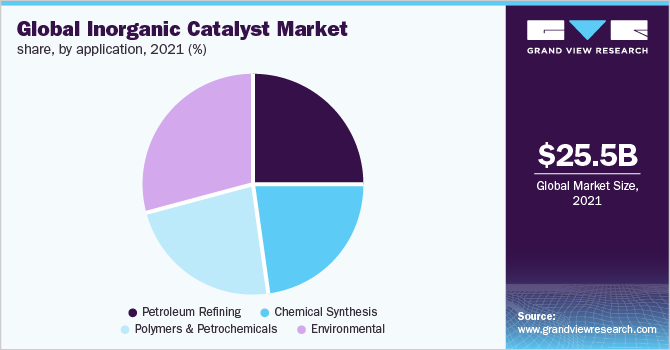 Heavy-duty vehicles incorporate catalysts into their converters to break the long chain hydrocarbons. Diesel engine vehicles consume more air during combustion to reduce particulate formation. A chemical process is used to split pollutants in the exhaust stream into less harmful components. It also has a ceramic honeycomb-like structure, coated with a material that catalyzes the chemical reaction thus, reducing pollution levels. These are known to reduce particulate matter by 20%, hydrocarbons by 50%, and carbon monoxide by 40%. Existing stringent heavy-duty highway engine standards are expected to augment product demand in heavy-duty vehicles.

The Asia Pacific accounted revenue share of 2.57% in 2021 and is expected to exhibit a CAGR of 4.2% during the forecast period. This is attributed to the rapid development of the chemical industry, predominantly in the emerging economies of the region such as China and India. Furthermore, the growing demand for petroleum products in the region, driven by the increasing population is projected to drive the market. The developing chemical processing market in Japan accounts for a high demand for catalysts in the region. 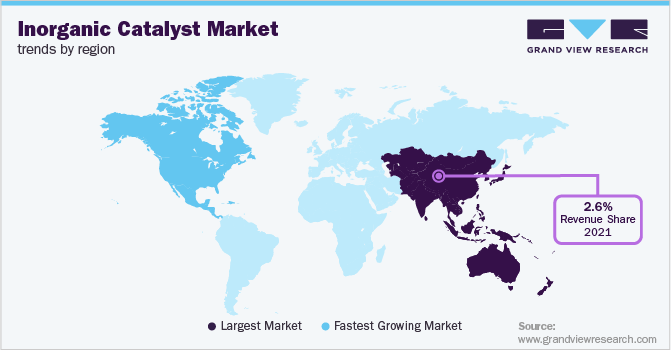 In addition, the product demand in the economy is driven by the presence of several petroleum refineries such as Chiba Refinery, Negishi Yokohama Refinery, and Kawasaki Refinery, which account for high demand. The demand for metals is expected to be driven using late transition metals such as palladium, platinum, gold, and ruthenium as catalysts and pre-catalysts. Increased product demand to reduce the reaction time for various chemical synthesis processes in the region is expected to drive the industry demand in the forecast period.

North America inorganic catalysts accounted for 1.54% of the market revenue share in 2021 and are anticipated to reveal a CAGR of 3.1% during the forecast period. The region is driven by the well-established food and beverage industry coupled with the high demand for packaged and processed food products in the region. The product demand in the region is expected to witness significant growth owing to the robust growth of the chemical and polymer industry in the region. In addition, the high demand for refining catalysts in the region on account of expanding petrochemical and refinery industry is expected to have a positive impact on the overall market growth in the forecast period.

The European market accounted for 0.91% of revenue share in 2021 and is expected to exhibit a CAGR of 2.5% during the forecast period. The market is driven by the growth of several end-use industries including chemical synthesis, petroleum refining, and petrochemicals and polymers. Regarding petroleum refineries, the region has adequate primary distillation capacity to meet the foreseeable needs. In addition, the presence of key companies such as BASF SE and Bayer AG has resulted in the swift growth of the chemicals, petrochemicals, and polymers industries. The aforementioned trends are anticipated to have a positive influence on the inorganic catalyst market during the forecast period.

The inorganic catalyst market is expanding at a remarkable rate owing to the consumption enhancement in different end-use applications including petroleum refining, chemical synthesis, and petrochemicals. Key players are concentrating on different mergers and acquisitions, and joint ventures for upscaling business. In addition, key industry participants across regions are taking initiatives with key manufacturers to strengthen their customer base and geographical footprint. Some prominent players in the inorganic catalyst market include:

This report forecasts revenue growth at global, regional, and country levels and provides an analysis of the latest industry trends in each of the sub-segments from 2018 to 2030. For this study, Grand View Research has segmented the inorganic catalyst market report based on type, application, and region: 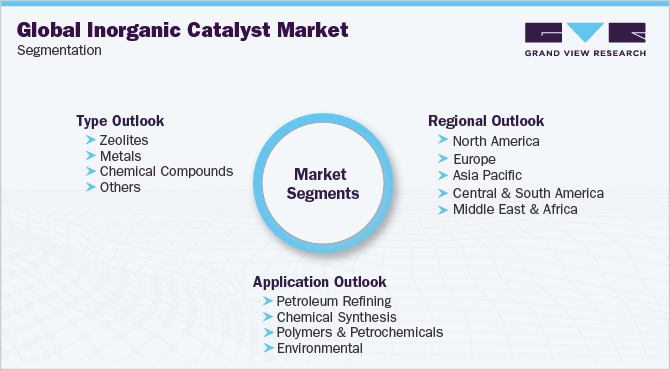 What are the factors driving the inorganic catalyst market?

b. Key factors that are driving the inorganic catalyst market growth include increasing demand for energy, growth in oil & gas sector, agricultural industry growth in India & China, and rapid development in the chemicals industry.

How big is the inorganic catalyst market?

What is the inorganic catalyst market growth?

Which segment accounted for the largest inorganic catalyst market share?

b. The Asia Pacific dominated the inorganic catalyst market with a share of 33.3% in 2021. This is attributable to growing environmental and petroleum refining applications in the region, especially in China.

Who are the key players in the inorganic catalyst market?