One of the foremost factors contributing to the growth of the market is the surging number of diabetics due to aging, obesity, and unhealthy lifestyles. Obesity is believed to be a major factor leading to the development of diabetes in individuals. According to the WHO, in 2014, over 1.9 billion people were identified to be overweight, of which, around 600 million people were obese. Risk factors, such as obesity and being overweight are highly linked to the incidence of diabetes, which is rising by epidemic proportions, thus engendering a high prevalence of diabetes. Consequently, the large population afflicted with diabetes is driving the market for insulin delivery devices.

In addition, the high demand for advanced insulin delivery devices is supporting the adoption of recently launched innovative pen devices and portable pumps, which is estimated to boost the market growth. However, stringent government rules and regulations governing the product approval process and the high cost of insulin analogs in diabetes care management could hinder the market growth.

Insulin pens held the largest share in the insulin delivery devices industry in the year 2015 owing to its advantages over other products. Factors such as its high adoption rate, user-friendly design, and rising popularity among consumers contributed to the largest revenue share of this segment. The growing focus of manufacturers on promoting innovation and advancements is another major factor yielding the high share. For instance, in January 2014, Novo Nordisk launched a new device, NovoPen Echo in the U.S. This is the first device of its kind, available in the U.S., with a memory function and half-unit dosage features. Thus, product advancements are expected to propel the demand for insulin pens in the near future.

Homecare was the largest grossing as well as the fastest-growing segment in 2015. It is anticipated that the home care segment will maintain its position in the market during the forecast period. The key factors resulting in significant growth of the segment are increasing awareness of diabetes care and the growing adoption of insulin delivery devices amongst patients for home use. 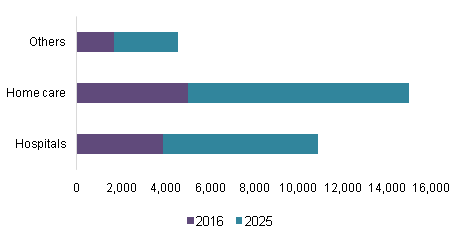 The use of insulin devices at home saves on visiting costs, hospital or clinic fees, and waiting time. The advanced devices, including pumps, pens, and injectors, are small in size, highly portable, and can be used anywhere at any time. Thus, greater access to these devices and their higher user-friendliness has made insulin users opt for self-care diabetes management options.

North America is estimated to reign the insulin delivery devices industry in the year 2015. The rising diabetic population and the accessibility of technologically advanced devices are the factors contributing to the high market growth in North America. According to statistics by the CDC in 2016, around 29 million people in the U.S. are still suffering from diabetes, among them 21.0 million patients were diagnosed, whereas 8.1 million patients remained undiagnosed. Also, according to the Canadian Diabetes Association, the prevalence of diabetes is growing in Canada and it is estimated to reach around 5 million by 2025. Thus, the large patient base suffering from diabetes and its growing prevalence is expected to boost the growth in this region. 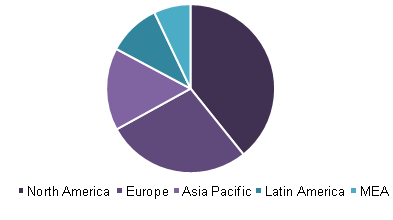 Asia Pacific is the fastest-growing segment of this market. Developing economies, such as China and India, are expected to witness the highest growth during the study period due to the presence of a large population base suffering from diabetes and its rising awareness amongst individuals. In addition, global vendors are expanding their business in the Asia Pacific region and providing high-end products for diabetes care, which is the major factor contributing to the growth.

Manufacturers are expanding their business with strategic collaborations and mergers and acquisitions with other vendors in the sector. For instance, in June 2014, Sanofi and Medtronic entered into a strategic partnership to develop drug-device combinations for diabetes patients. This alliance combined Sanofi's wide-ranging insulin product portfolio with Medtronic's expertise in continuous glucose monitoring and pump therapy to improve upon type 2 diabetes care management and patient medication compliance. In addition, technology innovation and product advancement initiatives are other major strategies applied by the key players to attain maximum revenue share in this sector.

Market Segments Covered in the Report

This report forecasts revenue growth and provides an analysis of the industry trends in each of the sub-markets from 2014 to 2025. For the purpose of this study, Grand View Research has segmented the insulin delivery devices market on the basis of product, end-use, and region: