The global lactic acid market size was valued at USD 2.9 billion in 2021 and is expected to expand at a compound annual growth rate (CAGR) of 8.0% from 2022 to 2030. The usage of lactic acid in various end-use industries, including pharmaceuticals and food and beverages, majorly in emerging economies, such as India, China, and Indonesia, is anticipated to drive the demand for this product over the forecast period. Lactic acid is majorly used in the production of PLA, which is a biodegradable polymer and a compostable thermoplastic made from renewable sources, such as lactic acid, produced via fermentation processes. This chemical is Generally Recognized as Safe (GRAS) and has great market potential in the food industry as it is being recognized as harmless by the United States Food and Drug Administration. It can be alternatively produced by chemical synthesis or fermentation. 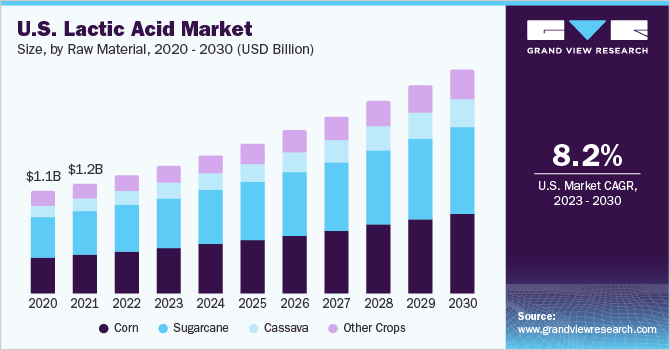 During the global COVID-19 pandemic, polylactic acid (PLA) was widely used in creating microwaveable containers, such as food containers and disposable cutlery. Aesthetic appeal, excellent printability, resistance to grease and oil, and other benefits of packed containers favorably influenced the expanding incorporation of PLA in the formation of food packaging items internationally. Plastic has become increasingly preferred over older packaging solutions. During the pandemic, food and beverage packaging were in great demand. Due to well-being and sanitation concerns, people bought packaged food goods. As a result, these reasons have contributed to the expansion of the market for lactic acid.

Lactic acid is considered to be one of the well-known organic acids having a wide range of industrial applications. This product finds main applications in the food, chemical, pharmaceutical, and cosmetics industries. This product is a lactic acid bacterium, which refers to a large group of beneficial bacteria having probiotic properties. Additionally, this acid plays a crucial role in the preparation of wine and fermented dairy products, pickling of vegetables, and curing fish, meat, and sausages.

Lactic acid is not only a significant ingredient in fermented foods, including canned vegetables, yogurt, and butter, but is also used as a preservative and acidulant in pickled vegetables and olives. This naturally occurring organic acid is used in a variety of applications, including food and beverages, pharmaceuticals, cosmetics, chemicals, and industrial. This product is one of the organic acids produced on a large scale. The most commonly used feedstock is carbohydrates obtained from different sources, such as sugarcane and corn starch. As compared to mineral acids, organic acids such as formic acid and lactic acid do not completely dissociate in water.

The sugarcane raw material segment accounted for the largest revenue share of around 39% in 2021. This is attributed to the abundant availability of biomass materials. Raw sugar extracted from the sugar beet or sugarcane is one of the major feedstocks used in the manufacturing of lactic acid. Sugarcane contributes notably to the development of bioplastics and the growth of the food and biochemical industries.

The corn segment is expected to witness a CAGR of 8.2% over the forecast period. It has emerged as a prominent raw material owing to its low cost, sustainability, and abundance in nature. Rising environmental concerns, sustainable processing practices, and a limited supply of petroleum feedstock are anticipated to augment the demand for corn-based lactic acid products over the forecast period.

Yeast extract is one of the most commonly used ingredients for the production of lactic acid. However, the high production cost associated with this process gave rise to an alternative, namely Corn Steep Liquor (CSL) derived from corn as a by-product of the corn steeping process. The demand for corn-based lactic acid as a pH regulator, microbial activity enhancer, and acidulant in the food and beverages industry is expected to boost market growth over the coming years. Other numerous inexpensive raw materials used in the production of lactic acid are starchy and cellulosic materials, such as cassava, sweet sorghum, potato, wheat, rye-barley, rice, xylan, galactan, lignin, and other filamentous fungi, such as Lactic Acid Bacteria (LAB) and Rhizopus.

The polylactic acid application segment dominated the market for lactic acid and accounted for the largest revenue share of around 28% in 2021. This is attributed to its durability, mechanical strength, and transparency as compared to other biodegradable plastics. Rising demand for bio-degradable plastic materials, the constant growth of the automotive industry, and increasing demand from the end-use industries are the major driving factors for this application segment. In October 2020, FUTERRO declared the opening of its first wholly integrated polylactic acid (PLA) factory in China in partnership with its long-term partner BBCA Biochemical. The latest lactic acid and PLA machines use patented technologies that enable the production of high-quality competitive pricing.

In the transportation and automotive sectors, numerous vehicle interior components such as interior trim, under the hood components, and engine components are produced using lightweight materials. The lightweight components reduce the weight of the vehicle and enhance performance. This has led to a rise in demand for sustainable bioplastic materials to increase fuel efficiency and toughness, which, in turn, will propel the demand for PLA. 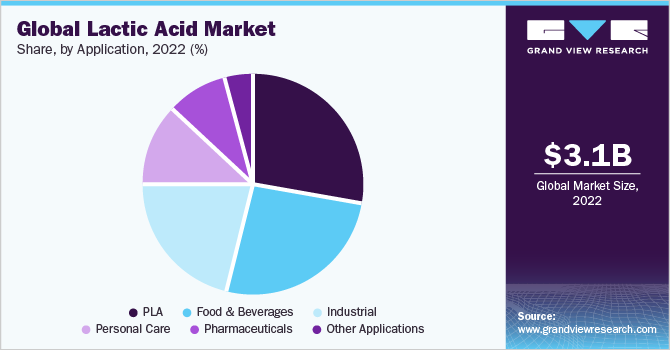 Food and beverages emerged as the second-largest application segment in the year 2021. Lactic acid has the ability to enhance flavor and increase the shelf life of food and beverages by controlling the development of pathogenic microorganisms. Owing to these properties, the demand for this product is anticipated to surge with its growing penetration in the seafood, poultry, and meat industries. Lactic acid serves as a vital feedstock in the production of PLA, which, is further used to manufacture biodegradable plastic. These biodegradable plastics are used in numerous industries, such as packaging and chemical. Lactic acid is a natural solvent used as a metal cleaning agent as well as in mechanical cleaning applications.

The pharmaceutical industry has been a key component in the growth of this market over the past few years on account of the increasing application of lactic acid in drug manufacturing and as an electrolyte in intravenous solutions used for supplementing the required bodily fluids. Properties of lactic acid such as metal sequestration, pH regulator, effectiveness in being a natural body constituent, and chiral intermediate in pharmaceutical products are expected to boost the growth of the pharmaceutical industry. The personal care application segment is expected to witness significant growth over the forecast period, which can be attributed to increasing product use in skincare products. Lactic acid-based skin moisturizers improve dry skin, remove acne scars, improve discoloration, and prevent damage to skin tissues.

North America dominated the lactic acid market for lactic acid and accounted for the largest revenue share of more than 45% in 2021. This is attributed to the growing personal care, pharmaceutical, and food and beverages industries. The expanding pharmaceutical industry in the U.S. as a result of increasing expenditures on medicines is anticipated to have a positive impact on market growth in this region.

In North America, the market for lactic acid is expected to grow on account of the presence of various personal care and cosmetic companies, such as Maybelline New York, Procter and Gamble, the Colgate-Palmolive Company, Avon, Unilever, and Johnson and Johnson Private Limited. Moreover, the robust manufacturing base of global cosmetic manufacturers, such as Procter and Gamble, Unilever, and Johnson and Johnson Private Limited, in the U.S. is expected to promote the demand for personal care products.

Rising demand for PLA owing to the U.S. government efforts toward reducing carbon footprint, high demand from packaging applications, and the growth of the pharmaceutical and personal care industries are expected to propel the growth of the market for lactic acid over the forecast period.

Companies are engaging in mergers and acquisitions with an aim to strengthen their manufacturing capacities, expand their product portfolio, and offer a competitive product range. As per the article published in November 2020, Sulzer Chemtech supported partnered B&F PLA to develop China’s first fully-integrated sugar to polylactic acid plant in Bengbu. The facility uses Sulzer's polymerization, distillation, and crystallization technology to generate 30,000 tons of PLA every year.

In September 2020, Cargill's NatureWorks unveiled several manufacturing technology innovations involving lactide monomer purification efficiency. This will enhance the availability of the entire Ingeo (PLA) biomaterials range by 10%, assisting in serving major industrial customers. In April 2019, Corbion and Total announced a joint venture to build a PLA bioplastic plant in Europe. The plant is expected to have an annual production capacity of 100,000 tons and will be operational from 2024. Corbion also appointed IMCD (a prominent distributor of food ingredients and specialty chemicals) in New Zealand and Australia. The strategy is anticipated to benefit lactic acid distribution in the Asia Pacific region, especially to the manufacturers of beverages, confectionery, sauces, baked goods, condiments, dressings, and prepared foods.

In January 2017, ThyssenKrupp AG announced to establish a manufacturing facility in Changchun, China, for producing 10,000 tons of PLA. This strategic initiative was aimed at reducing the company’s dependency on petroleum-based plastics. Based on its patented technology PLAneo, this commercial plant commenced its manufacturing operations in the first quarter of 2018. Manufacturing companies operating in the market focus mainly on expanding their global footprints in an attempt to increase market shares and drive their revenues. They are expanding production facilities in various regions, such as North America, Asia Pacific, and Europe, owing to the easy availability of raw materials and close proximity to raw material suppliers. Some of the prominent players in the global lactic acid market include:

This report forecasts revenue and volume growth at global, regional, and country levels and provides an analysis of the latest industry trends in each of the sub-segments from 2017 to 2030. For the purpose of this study, Grand View Research has segmented the global lactic acid market report on the basis of raw material, application, and region:

How big is the lactic acid market?

What is the lactic acid market growth?

b. The sugarcane raw material segment dominated the global lactic acid market and accounted for the largest revenue share of over 38% in 2021.

b. The polylactic acid application segment led the global lactic acid market and accounted for the largest revenue share of more than 28% in 2021.

Which region accounted for the largest lactic acid market share?

b. North America dominated the lactic acid market with a share of 45% in 2021. This is attributable to rising consumer awareness regarding recyclability and green packaging.

Lactic acid prominently used across food and beverage, cosmetics, production of polylactic acid, which in turn is used for food packaging and medical implants & devices. A sudden increase in demand for ventilators and supporting medical equipment, has triggered the demand for bioplastics in the midst of the pandemic. PLA being a prominent bioplastic, is expected to provide traction to lactic acid consumption. However, as the coronavirus crises entail significant ramifications in the agriculture industry, the supply of raw material for producing lactic acid might observe an adverse impact. The updated report will account for COVID-19 as a key market contributor.