The global legionella testing market size was valued at USD 160.0 million in 2015 and is expected to grow at a CAGR of 8.4% during the forecast period. The increasing incidence of Legionella-related disorders and rising awareness about their preventive management is expected to drive the market growth.

Legionella can cause Legionellosis, a respiratory disorder (a form of pneumonia). It requires intensive care and hospitalization, hence, it is considered as one of the public health concerns. According to the Centers for Disease Control and Prevention, 4,568 cases of Legionnaires’ disease were reported in the year 2013.

As Legionella bacteria grow in hot water conditions, various industries that rely on water storage are prone to the development of Legionella in water. The potential end users that can be harmed by these dangerous waterborne bacteria include schools, restaurants, hospitals, and large plumbing systems, etc. Therefore, there is an increasing demand by the industries for accurate and on-time diagnosis of Legionella and related infections.

Water testing was the largest as well as the fastest-growing segment of the global Legionella testing market. The factors contributing to the segment growth mainly include government laws that mandate the testing for Legionella. For instance, in many countries in Europe, Legionella testing is mandatory by law and must be conducted

Microbial culture held the majority share of water testing in 2015 followed by Polymerase Chain Reaction (PCR), while PCR is projected to be the fastest-growing segment. PCR provides benefits such as timely and accurate diagnosis along with reproducible results. Hence, it is being preferred as a bacterial testing method. Urine antigen tests were the largest segment in IVD testing. On the other hand, PCR was the fastest-growing segment owing to its advantages.

Time constraint is the most important drawback of conventional testing methods, as it can take up to weeks to deliver the results and fail to provide accurate results on time. In the absence of accurate diagnostics, presumptive treatment, or delay in treatment can happen Delay in diagnosis can hamper the treatment measures and can also cause outbreaks.

The conventional testing methods are generally labor-intensive and involve manual interference, which can cause contamination and impact the outputs. The diagnostic technological advancements in terms of automation and digitization are responsible for market growth.

Automation facilitates up to 50% time-saving in diagnostic procedures, as it reduces the burden of manual efforts. In addition, results are reliable, precise, and sensitive. Diagnostic lab automation generates standardized and reproducible results. Therefore, advanced rapid diagnostic methods are gaining popularity and their demand will continue to expand in the coming years. However, a limited number of manufacturing companies can be a challenge for market growth.

Europe was identified as the largest market for Legionella testing in the year 2015. The governments in some countries such as the UK and Germany have made Legionella testing compulsory. This is primarily due to the high levels of awareness regarding Legionellosis and related diseases. In European countries, Legionella testing is required on a quarterly basis for cooling towers as a result of the Legionella incident in the Summer of 2016. 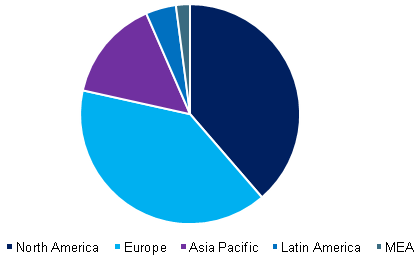 On the other hand, the Asia Pacific region is projected to showcase the fastest growth rate over the forecast period. The rising geriatric population in this region, which is more prone to infections, increasing disposable income, and increasing penetration of Legionella testing products via a network of global distribution are expected to drive the market growth over the forecast period.

This report forecasts revenue growth and provides an analysis of the industry trends in each of the sub-segments from 2013 to 2025. For the purpose of this study, Grand View Research has segmented the Legionella testing market on the basis of application, and region: