The global light duty vehicles market size was valued at USD 522.62 billion in 2018 and is expected to register a CAGR of 8.5% from 2019 to 2025. Light duty vehicle is defined as a truck or car with Gross Vehicle Weight Rating (GVWR) of less than 8,500 lbs. The demand for light duty vehicle is expected to grow owing to the lower volume of air pollutants it tends to emit. On the other hand, stringent regulations aimed at reducing vehicular emissions are expected to encourage the adoption of electric light duty trucks, thereby driving the market growth over the forecast period.

Governments in various countries have implemented stringent regulations aimed at arresting the rising levels of vehicular pollution. For instance, the Government of India has implemented the Bharat Stage Emission Standards (BSES) that regulate the output of air pollutants from vehicles. The European Union has also established European emission standards that define the acceptable limits for exhaust emissions. Light duty vehicle tends to emit lower volumes of air pollutants and is hence turning out to be the preferred vehicle to transport people and goods.

Automotive OEMs are increasingly rolling out light duty vehicle equipped with fleet tracking, navigation, and safety features. Advances in sensor technologies, location-based services, and analytics are paving the way for an aggressive adoption of autonomous light duty vehicles. The proliferation of IoT has enabled the integration of telematics systems, such as fleet telematics to track light duty vehicle, into automobiles. This has subsequently enabled the development of driverless passenger cars and self-driven rental cars. The growing trend of offering dynamic shuttles as part of on-demand passenger services is another major factor contributing to the growing market for light duty vehicles.

When it comes to the logistics & transportation industry, supply chain complexities are increasing continuously. Last mile delivery is evolving dynamically in line with the customers’ changing preferences. Innovations in last mile delivery and passenger transportation are poised to expand the application portfolio of light duty vehicles. As such, the market is expected to grow over the forecast period in line with the expanding e-commerce industry and the widening application portfolio of light duty vehicles.

On the basis of vehicle type, the market for light duty vehicle has been further segmented into passenger car, van, Sports Utility Vehicle (SUV), and pickup trucks. The passenger car segment accounted for a considerable market share in 2018 and is expected to grow at a steady rate over the forecast period. The growth of the segment can be attributed to the growing adoption of passenger cars by incumbents of the tourism industry. The van segment also accounted for a significant market share in 2018 and is expected to register a high CAGR over the forecast period. Incumbents of the healthcare and e-commerce industries are expected to increasingly deploy vans in their fleets. Vans are also expected to be adopted aggressively for postal services, ambulance services, mobile workshops, and policing and rescue operations.

The pickup truck segment is expected to emerge as the fastest-growing segment owing to the rising adoption of pick-up trucks for towing other vehicles. The larger torque provided by pickup trucks allows them to pull trailers, boats, campers, and other vehicles conveniently. Besides, these trucks can also be utilized on all types of terrains and weather conditions. The growing popularity of small fuel-efficient vehicles, such as Hyundai Santa Cruz, is further expected to drive the growth of the pickup truck segment over the forecast period.

On the basis of fuel type, the market for light duty vehicle has been further segmented into diesel, gasoline, hybrid, and electric. The gasoline segment dominated the market in 2018. The gasoline-fired vehicle tends to emit lesser emissions as compared to diesel-fired vehicle and can also be procured affordably. However, the electric segment is expected to register the highest CAGR over the forecast period owing to the growing demand for high-performance and emission-free vehicles. Advances in technology coupled with the proactive government initiatives to reduce vehicular emissions are encouraging the development and adoption of electric vehicles and the rollout of electric vehicle charging infrastructure, thereby driving the growth of the electric segment.

Manufacturers of light duty electric vehicles are incentivizing customers for buying electric vehicles. For instance, in North America, bonus payments and discounts on insurance are being offered to the buyers of electric vehicles. At the same time, while countries, such as China, France, and Norway, have imposed stringent rules and regulations aimed at reducing vehicular emissions, other countries, such as China, the U.K., the Netherlands, and the Czech Republic, have implemented low emission zones in certain areas. Such initiatives are also expected to drive the growth of the electric segment.

The AWD segment is expected to register the highest CAGR over the forecast period. AWD includes a front, rear, and center differential that distributes power uniformly among all the four wheels of the vehicle. AWD systems are usually used for sports utility vehicles (SUVs) and minivans. AWD systems also play a decisive role in excessive weather conditions. As such, AWD vehicles are particularly known to improve the safety and performance of vehicles in cold weather. AWD systems are also suitable for vehicles used for off-road racing in muddy, snowy, and rocky terrains. 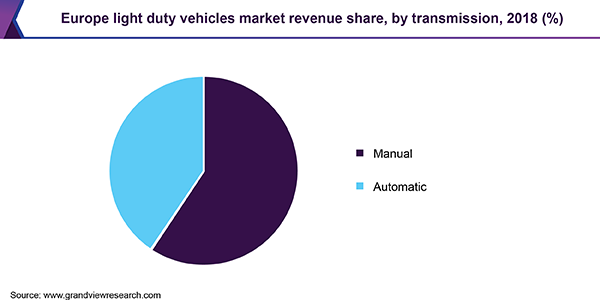 On the basis of region, the light duty vehicles market has been segmented into North America, Europe, Asia Pacific, Latin America, and the Middle East & Africa. North America dominated the market in 2018 owing to the growing adoption of electric vehicles in line with the government initiatives favoring the development and adoption of electric vehicles and the rollout of electric vehicle charging infrastructure. Moreover, the U.S. also happens to be the largest manufacturer of light duty vehicles. However, Asia Pacific is expected to emerge as the fastest-growing regional market over the forecast period as a result of the evolving e-commerce industry, particularly in China, India, and Japan. Stringent regulations aimed at curbing vehicular emissions are also expected to drive the demand for light duty electric vehicles in Asia Pacific.

Europe accounted for a considerable market share in 2018 owing to the increasing adoption of light duty trucks for inland cargo transports within Europe, where most of the cargo transportation occurs via road. According to Eurostat, over 75% of inland cargo transports within the EU, i.e., about 1,750 billion metric ton-kilometer (tkm), occur by road. On the other hand, initiatives being pursued by the automotive manufacturers in the region to implement new ride-sharing platforms are driving the demand for passenger cars. For instance, Daimler entered into a joint venture with Via, a start-up focused on developing scalable and on-demand ride-sharing solutions, to introduce on-demand shared rides in Europe.

Light duty vehicle OEMs need to source more than 50% of the components from their suppliers. Hence, they prefer establishing healthy partnerships with raw material suppliers to ensure an uninterrupted supply of components. Leading market players are also investing aggressively in research & development in order to come up with innovative technologies and gain a competitive advantage over their rivals. They are also partnering with government agencies for the development of EV charging infrastructure.

This report forecasts revenue growth at the global, regional, and country levels and provides an analysis of the latest industry trends in each of the sub-segments from 2014 to 2025. For the purpose of this study, Grand View Research has segmented the light duty vehicles market report on the basis of vehicle type, fuel type, transmission, drivetrain, and region: