The global lithium iron phosphate battery market size to be valued at USD 15.24 billion by 2027 and is expected to grow at a compound annual growth rate (CAGR) of 15.2% during the forecast period. Rising demand for hybrid electric vehicles and electric vehicles with growing environmental apprehensions and high requirement for lithium iron phosphate (LiFePO4) batteries in battery energy storage systems are driving the market. Hence, increasing focus on energy storage technologies is a major factor boosting the market growth. The market is projected to witness significant growth in the years to come as a result of several factors, including the ever-increasing population owing to which there has been a substantial depletion in fossil fuel reserves. This has eventually led to a change in the focus of various countries towards renewable electricity generation. 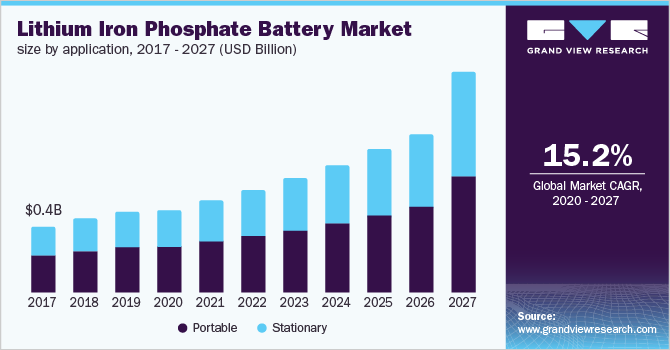 Growing focus towards renewable sources of energy generation to address the stern concerns over climate change and improve energy conservation is likely to contribute to the growth of the market over the forecast period. The demand for lithium iron phosphate batteries in the U.S. was driven by increasing concerns regarding ecological degradation owing to pollution from fossil fuels. The presence of key producers and dealers with varied distribution networks is also projected to boost the demand over the next seven years across the country. The market is extremely competitive with the presence of a large number of market players, mostly present in the U.S. and China.

However, operations of the companies are at numerous places with manufacturing plants and distribution carried out across several locations, along with third-party distribution agencies. Extensive research and development activities to develop high-quality and effective products is another initiative undertaken by the producers. Such batteries find applications in portable and stationary battery systems.

The increasing use of lithium iron phosphate batteries in electric vehicles due to their unique properties such as enhanced energy efficiency, long life cycle, high power, and energy density is the key driver for the industry growth. According to the International Energy Agency, global electric vehicles sale was estimated at around 6.6 million in 2021. The market share was tripled as compared to the share in the last two years, in turn, driving the market growth for lithium-ion phosphate batteries.

Moreover, the rising demand for LiFePO4 batteries for energy storage has witnessed a surged demand. The increasing rate of adoption of renewable energy generators such as solar photovoltaic panels and wind turbines has further increased the demand for energy storage. Lithium iron phosphate battery is widely used in both stationary and portable energy storage. The above factors are estimated to increase the portfolios and investments for the market in the forecast period.

However, the concerns regarding safety and reliability along with high costs are limiting the market adoption for consumers. Advancements in research and development are expected to create opportunities for market expansion.

Based on end-use, the market is segregated as automotive, power, industrial, and others. The others end-use segment dominated the market and accounted for a 33.7% share in 2019. The segment is projected to witness the highest growth over the forecast period.

The automotive segment is expected to witness significant growth in the years to come owing to an increase in the demand from the Asia Pacific market. Unconventional energy storage battery systems that have the ability to augment the vehicle efficiency and performance are a significant area of focus for the automotive manufacturers. On account of high energy density and long cycle time, lithium iron phosphate batteries are projected to be the most favored choice as an alternative energy storage battery system. Therefore, growth in the demand for automobiles across countries, such as China, is projected to fuel the demand for lithium iron phosphate batteries. 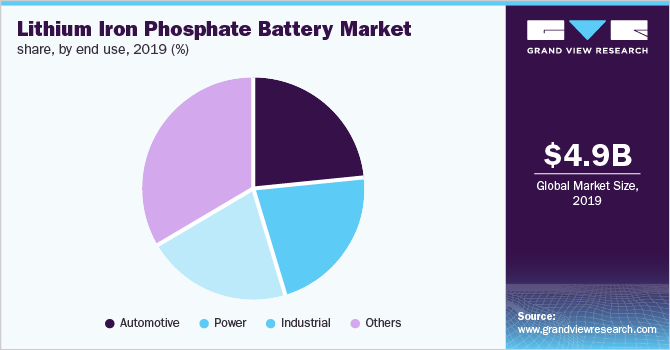 The power end-use segment is projected to expand at a CAGR of 15.5% from 2020 to 2027, as the use of lithium iron phosphate as a raw material has helped to resolve issues of consequent explosions and overheating of such batteries. The demand for these batteries is increasing across the power segment owing to their widespread usage in power generation plants and automobiles.

Asia Pacific led the market and accounted for 32.8% share in 2019. The region is expected to witness significant growth over the forecast period owing to the established automotive sector and rising demand for consumer electronics across the region. The growing demand for consumer electronics from countries, such as Japan, India, and China, along with stringent government regulations, will also propel the market growth across the region.

Europe is expected to register a CAGR of 14.7% from 2020 to 2027. The European Union dominated the automotive segment in 2019. The growing adoption of electric vehicles is one of the major factors creating growth prospects, where each country has a supportive policy for the EVs. Hence, it further drives the demand for lithium iron phosphate batteries and creates growth prospects for all key battery manufacturers across the region. In North America, the U.S. is one of the largest markets with a large number of renewable energy battery storage projects, which are commissioned every year.

The industry has been characterized by high competition. High product quality, pricing, brand recognition, reliability, durability, and energy density are some of the key factors for the LiFePO4 battery manufacturers in order to stay afloat in this market. As per the trends, it has been observed that numerous manufacturers of lithium iron phosphate batteries are continuously engaged in R&D activities. As this business entails extensive investments and ROI is a time-consuming process, the manufacturers are reliant on government funding in order to enlarge their facilities.

Some prominent players in the global lithium iron phosphate battery market include:

This report forecasts revenue growth at the global, regional, and country levels and provides an analysis of the latest industry trends and opportunities in each of the sub-segments from 2016 to 2027. For the purpose of this study, Grand View Research has segmented the global lithium iron phosphate battery market report on the basis of end-use, application, and region. 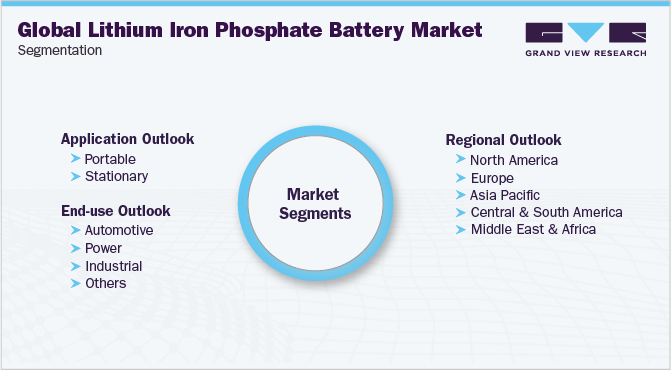 How big is the lithium iron phosphate material and battery market?

b. The global lithium iron phosphate battery market size was estimated at USD 4.91 billion in 2019 and is expected to reach USD 5.20 billion in 2020.

What is the lithium iron phosphate material and battery market growth?

Who are the key players in lithium iron phosphate material and battery market?

What are the factors driving the lithium iron phosphate material and battery market?