The global LTCC and HTCC market size was valued at USD 3.0 billion in 2019 and is expected to grow at a compound annual growth rate (CAGR) of 2.5% from 2020 to 2027. Increasing number of electronic components in an automotive vehicle is projected to positively influence the industry’s growth over the forecast period. The increasing electronic assembly units of the automotive vehicles are projected to drive the demand for LTCC and HTCC substrates. These multilayer substrates are used for various components including LED packages, electronic control unit (ECU), and sensors. The ongoing research for self-driving vehicles is further anticipated to boost the demand for LTCC and HTCC over the predicted timeline. 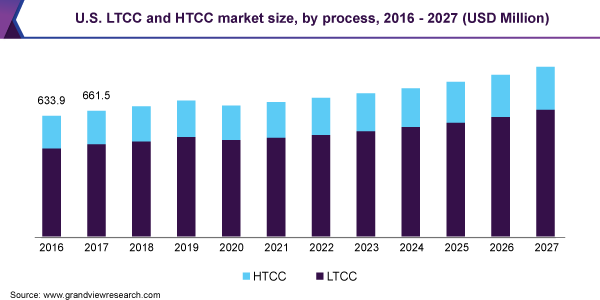 The U.S. automotive industry is among the primary end-use industries for LTCC and HTCC. The country houses major automotive OEMs and tech companies with a strong research base to develop more electronically enhanced vehicles. The ongoing research towards the development of self driving vehicles in the country by companies such as Tesla, Google, and Amazon is projected to drive the demand for ceramic substrates.

However, the ongoing slowdown in the automotive sector of U.S. due to the ongoing global pandemic crisis is likely to hamper the growth of the market for LTCC and HTCC over the forecast period. Major automotive vendors of the country including General Motors, Fiat Chrysler, Ford, and Honda have already announced to shut down their manufacturing facilities in the wake of the ongoing health crisis.

Another key threat to the growth of the market in U.S. is the closing down of manufacturing plants by General Motors in 2019. General Motors which is among the top automotive vehicles producers in the country announced the plans to close down four of its facilities. The closing down of facilities is likely to hamper the production of new vehicles, which, in-turn, is projected to restrain the growth of the market for LTCC and HTCC.

The drive towards the development of 5G wireless smartphones is expected to assist in the growth of the market for LTCC and HTCC substrates over the coming years. The rising prominence of wireless applications coupled with enhanced features continues to challenge researchers to include more functions within the limited space. At the same time, the hurdle to achieve greater battery life while improving the quality of display and lowering the cost of manufacturing is anticipated to promote new levels of manufacturing robustness.

The LTCC segment held more than 73.0% of the global market revenue in 2019. The segment is expected to dominate the market for LTCC and HTCC over the forecast period. Low temperature co-fired ceramic is defined as the process of fabricating a multilayer circuit with conductor lines. The process employs the use of low resistivity materials such as copper, gold, silver, palladium based alloys, and platinum based alloys. The process is performed at a low temperature between 850 to 875 degrees Celsius as compared to its counterpart. The process is widely gaining prominence in the telecommunication industry owing to its properties.

High temperature co-fired ceramics are obtained at a temperature range of more than 1000 degrees Celsius. Owing to such a high temperature fabrication process, the use of materials such as molybdenum and tungsten is preferred over materials like gold, copper, and silver. The manufacturing process of HTCC substrates includes tape preparation, greenline operations, firing operations, braze integration, final plating, and final inspection. The process requires a skilled labor force to achieve operational excellence and greater productivity.

The HTCC segment is likely to observe slow growth compared to its counterpart in the LTCC And HTCC market over the forecast period. The process utilizes high energy while resulting in larger transmission losses. Although its prevalence is likely to continue in developing countries as it is cheaper as compared to its counter parts. For instance, the average cost per layer through HTCC process is roughly around USD 0.80 per layer whereas that of LTCC is roughly around USD 1.40 per layer.

The automotive segment held the largest market share of 42.2% in 2019 and is expected to dominate the market for LTCC and HTCC over the forecast period. The progress towards the development of self-driving vehicles is projected to drive the demand for ceramic substrates. The use of ceramic substrates in automotive electronics components and assemblies has observed significant growth over the last few years. 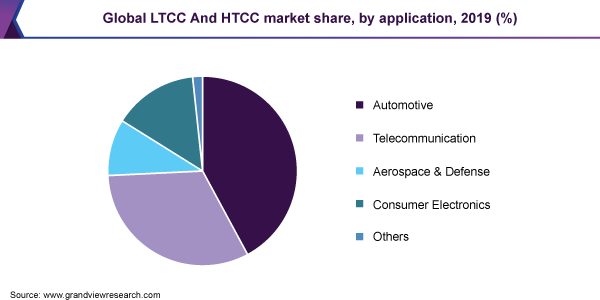 The second largest application of LTCC And HTCC is the telecommunication industry. The product is widely used as the substrates and packages for resistors, capacitors, inductors, and hybrid circuits present inside the smartphone assembly. The growing production of smartphones is projected to drive the demand for ceramic substrates such as LTCC and HTCC. For instance, global smartphone production increased by nearly 158.5 million units from 2015 to 2018. Therefore, the growing production volume of smartphones is expected to positively influence the industry’s growth over the forecast period.

The consumer electronics segment is projected to observe second highest CAGR over the forecast period. The rising demand for dielectric resonator antenna in consumer appliances such as laptops and smartwatches is driving the segment. The ceramic substrate is widely used in the production of these antennas. In addition, rising demand for miniaturization of components in consumer electronic appliances is further projected to drive the market over the predicted timeline.

Asia Pacific held the largest market share of 41.9% in 2019 and is projected to remain the most dominant regional market for LTCC and HTCC over the forecast period. The presence of manufacturing powerhouses such as India, China, and Japan is likely to push market growth. China which is set to launch 5G is expected to remain the key regional market in Asia Pacific. However, the ongoing pandemic situation has widely paralyzed the manufacturing sector of the region. This is expected to restrain the growth of the market for LTCC and HTCC during the forecast period.

North America is expected to remain the second largest regional market over the forecast period. The regional growth is primarily driven by the automotive sector of the U.S. The country has observed significant research towards self-driving vehicles. In addition, the presence of prominent automotive OEMs such as Tesla, Ford, and General Motors is projected to remain a key factor in driving the market for LTCC and HTCC over the forecast period.

Europe is projected to witness stagnant growth over the forecast period. The region is undergoing severe economic challenges. The disruption caused due to the coronavirus in the region is expected to remain a key hurdle for regional market growth. In addition, the automotive industry of the region is also observing slow growth. As per the stats released by the International Organization of Motor Vehicles Manufacturers (OICA) in 2018, the overall production of passenger vehicles in Europe declined from 16.7 million units in 2017 to 16.5 million units in 2018. Thus, regional economic challenges coupled with the declining production trend of automotive vehicles is considered as the key factors hampering the growth of the market for LTCC and HTCC.

The market for LTCC and HTCC comprises multinational vendors as well as small vendors based out of Asia Pacific. The industry participants are creating joint ventures in order to expand their market presence and enhance market share. For instance, in October 2019, Yokowo Co. Ltd. has entered into a joint venture with Nippon Electric Glass Co., Ltd. to produce and distribute low temperature co-fired ceramics. The new entity is named as LTCC Materials Co. Ltd. Some of the prominent players in the LTCC and HTCC market include:

This report forecasts revenue growth at global, regional, and country levels, and provides an analysis of the latest industry trends in each of the sub-segments from 2016 to 2027. For the purpose of this study, Grand View Research has segmented the global LTCC and HTCC market report on the basis of process, application, and region:

How big is the LTCC and HTCC market?

What is the LTCC and HTCC market growth?

Which segment accounted for the largest LTCC and HTCC market share?

b. Automotive dominated the LTCC and HTCC market with a share of 42.1% in 2019. This is attributable to development of self-driving vehicles and use of ceramic substrates in automotive electronics components and assemblies.

Who are the key players in LTCC and HTCC market?

What are the factors driving the LTCC and HTCC market?

b. Key factors that are driving the market growth include increasing number of electronic components in an automotive vehicle.