The global aesthetic medicine market size was valued at USD 52.5 billion in 2018 and is anticipated to expand at a CAGR of 8.9% over the forecast period. Innovation in aesthetic devices in the past decade has led to growth in demand for aesthetic treatments. The introduction of technically advanced products, such as non-invasive body contouring systems using controlled cooling technology is projected to create growth opportunities for the market in near future.

Moreover, the rise in disposable income has boosted the demand for cosmetic surgeries, thereby accelerating market growth. Rising population prone to experiencing signs of aging coupled with rising consciousness about physical appearance is anticipated to further drive the demand for aesthetic medicine. The trend of combination treatments in aesthetics is on a rise. Aesthetics is now being combined with lasers and radiofrequency to achieve smoother and sustained results. 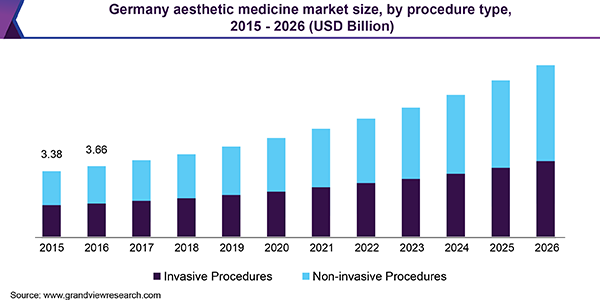 Growth in population between the ages 30 and 65 years is anticipated to boot the number of target consumers with signs of aging, such as wrinkles, lack of skin elasticity and dark spots. For instance, according to the Central Intelligence Agency (CIA) World Factbook, around 39.9% of the total German population was aged between 25 to 54 years and around 15.0% of the population was aged between 55 to 65 years in 2018. This factor is anticipated to drive the demand for aesthetic medicine from the country in the forthcoming years.

Moreover, the need for improved aesthetics in the rapidly rising working-class population is likely to boost the usage of aesthetic medicine over the forecast period. According to Statista, U.S. alone had a working population of 155.76 million in 2018. With improving employment rates especially in the emerging markets, the market is anticipated to witness lucrative growth over the forecast period. However, the side effects associated with aesthetic procedures are likely to continue negatively impacting the consumer preference index.

Invasive procedures, such as liposuction, breast augmentation, and nose reshaping, among others are some of the popular aesthetic procedures. Rise in number of men and women wanting to improve their aesthetic appearance has been fueling the demand for liposuction procedures or devices. According to a 2017 Plastic Surgery Statistics Report by the American Society of Plastic Surgeons, liposuction was among the top five cosmetic procedures in 2017 with over 246,354 procedures being performed during that year. Since 2006, breast augmentation is the top cosmetic surgical procedure according to the Plastic Surgery Statistics Report 2018.

In 2018, North America accounted for the largest market share in terms of revenue. Well-developed healthcare infrastructure, adoption of cosmetic procedures, increasing prevalence of skin disorders, and the presence of board certified and skilled cosmetic surgeons in the region are some of the major factors contributing to the growth. According to the American Society of Plastic Surgeons (ASPS), U.S. is reported to top the list of countries with the maximum number of cosmetic surgeons in the world in the year 2017. Awareness regarding aesthetic appeal and rising consciousness regarding outward appearance is also significantly contributing to the regional market growth. 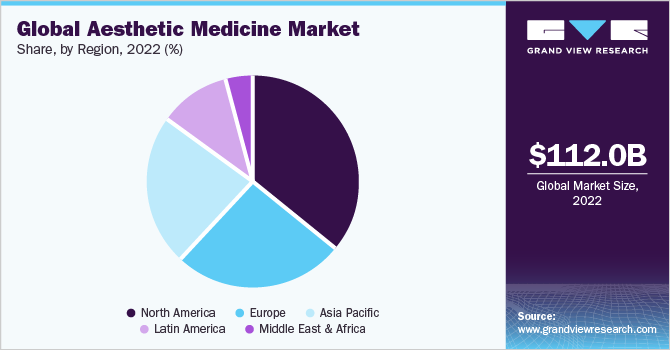 Asia Pacific is anticipated to register the fastest CAGR of 10.8% over the forecast period, owing to a large number of surgical procedures performed in South Korea, Japan, and China each year. Availability of skilled professionals, advanced techniques, and cheaper treatment costs are anticipated to attract more customers. China and India have the largest population pool aged between 30 and 65 years. Moreover, rising disposable income coupled with presence of a large pool of working population is generating demand for aesthetic procedures in these countries, further fueling the regional market growth.

The market is highly fragmented in nature with many local players competing with international players. However, strict regulatory approval process is challenging new product entries. Some of the key players contributing to the global market include Allergan, Hologic (cynosure), Johnson & Johnson, Galderma, Lumenis, Solta medical, Syneron candela, and Alma Laser.

Rapid adoption of advanced devices for improved treatment, and technological advancements are the primary parameters affecting the competitive nature of the market for aesthetic medicine. In addition, the major players frequently engage in mergers and acquisitions to retain market share and to diversify the product portfolio.

This report forecasts revenue growth at global, regional, and country levels and provides an analysis of the latest industry trends in each of the sub-segments from 2014 to 2026. For the purpose of this study, Grand View Research has segmented the global aesthetic medicine market report on the basis of procedure type and region:

How big is the aesthetic medicine market?

What is the aesthetic medicine market growth?

Which segment accounted for the largest aesthetic medicine market share?

b. North America dominated the aesthetic medicine market with a share of 36.4% in 2019. This is attributable to the well-developed healthcare infrastructure, adoption of cosmetic procedures, increasing prevalence of skin disorders, and the presence of board-certified and skilled cosmetic surgeons in the region are some of the major factors contributing to the growth.

Who are the key players in aesthetic medicine market?

What are the factors driving the aesthetic medicine market?

b. Key factors that are driving the aesthetic medicine market growth include innovation in aesthetic devices in the past decade. The introduction of technically advanced products, such as non-invasive body contouring systems using controlled cooling technology is projected to create growth opportunities for the market in near future.