The global medical polyetheretherketone market size was valued at USD 533.59 million in 2021 and is expected to expand at a compound annual growth rate (CAGR) of 7.3% from 2022 to 2030. The growth of the market is attributed to the increasing acceptability of medical polyetheretherketone (PEEK) as a metal replacement in medical implants like knee and hip implants, spinal implants, and vascular medical devices. PEEK can be 3D printed to produce patient-specific designs and porous geometries ideal for stable integration with bone. 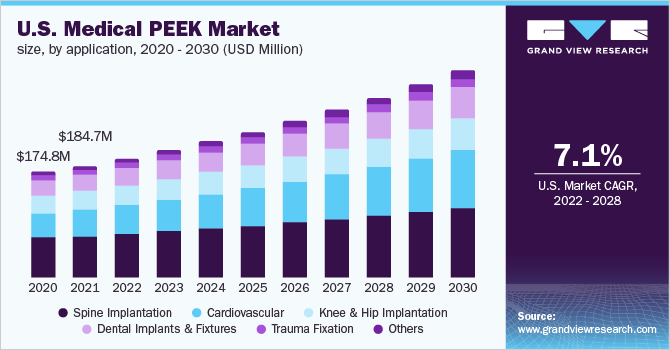 Major industry players are focusing on new product development and collaborations to strengthen their market position. Established players like Invibio and Evonik Industries have integrated their operations by backward and forward integration across the value chain. For example, Invibio Ltd. has its presence right from the monomer production needed for PEEK to processing the plastic into medical devices. The market is characterized by continuous technological advancements to produce refined products. In addition, companies are introducing technologically advanced products. In May 2021, a new Creed Cannulated Screw System for foot and ankle surgery made by Carbon22 from Solvay’s Zeniva polyetheretherketone received 510(k) clearance from the FDA.

The growth of the U.S. market for medical PEEK is attributed to the presence of well-established healthcare industry, a growing geriatric population, and rising government expenditure. In addition, the increasing home healthcare services are going to have a positive impact on the market over the forecast period. According to the latest U.S. census, 16.5% of the U.S. population, i.e., 54 million, is over the age of 65. By 2030, this number is expected to rise to 74 million. The number of people aged over 85, who need the most care, is growing even faster. According to the Centers for Disease Control and Prevention (CDC), an estimated population of nearly 78 million (26%) U.S. citizens aged 18 years or older are expected to have doctor-diagnosed arthritis by 2040.

The U.S. demand was 1,284.36 kilotons in 2021 and is expected to expand at a considerable CAGR from 2022 to 2030. The U.S has the largest number of companies involved in various stages of the medical PEEK value chain right from raw material manufacturers to medical device manufacturers. The presence of key manufacturers, such as Lubrizol, Celanese Corporation, and A. Schulman, Inc., can be regarded as one of the major factors driving the market in the country.

The spine implantation segment dominated the market and accounted for a revenue share of more than 30.0% in 2021. PEEK is increasingly being used in spine implantation replacing stainless steel and titanium as these metals are incompatible with diagnostic imaging like MRI and CT scans, which are important for tracking changes to the spinal cord and soft tissue structures of the spine. PEEK spinal cages or spacers are used in patients with degenerative spondylolisthesis, degenerative disk disease spinal stenosis, degenerative scoliosis, and other deformities of the spine.

The cardiovascular segment is expected to exhibit the highest growth rate over the forecast period, in terms of revenue. PEEK has good flexural modulus, radiopacity, high temperature, and electrical resistance, biocompatibility, and ease of sterilization. It can be extruded into small diameter tubes for vascular catheters through melt processing. Compared to other medical polymers like polyimides, PEEK is increasingly being used in vascular medical devices and is preferred for making tubes and catheters. PEEK is used in stent placement, transfemoral heart valve implantation, ablation catheters, and minimally invasive ventricular enhancement. 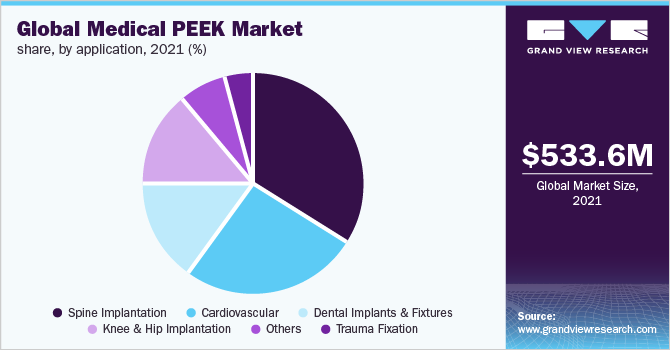 PEEK has a growing acceptance in trauma fixation where polymers are used in the place of metals. Bone fixation devices like bone screws and plates are fabricated from carbon fiber (CF) reinforced polyetheretherketone polymers. Carbon fiber (CF) reinforced PEEK polymers have various advantages over metals like radiolucency, the improved fatigue strength of implanted devices compared to metals, easier removal, and earlier healing of the fracture because of similar stiffness to the bone.

North America held the largest revenue share of more than 40.0% in 2021 and is expected to witness significant growth over the forecast period. The increasing geriatric population in the U.S. and Canada and increasing healthcare spending in the form of health insurance in the U.S. have been among the major trends impacting the market growth in North America. This is expected to augment the demand for medical devices over the coming years, thereby driving the North American medical PEEK market over the forecast period.

The Asia Pacific is expected to register the highest growth rate of 8.7% over the forecast period, in terms of revenue. In APAC, cardiovascular application emerged as the largest segment in 2021, with a market value of USD 36.17 million. This can be attributed to the growing sedentary lifestyle of the young and elderly population in countries such as China and India. The increasing geriatric population in the region is likely to drive the demand for tooth implants and dentures, which, in turn, is anticipated to fuel the demand for PEEK in denture base material. In terms of revenue, dental implants and fixtures are expected to register the second-highest growth rate of 9.3% in the Asia Pacific over the forecast period.

The market is characterized by the presence of key players, along with a few media and small regional players. Established players such as Evonik Industries AG are investing in startups related to medical polyetheretherketone, which can further strengthen their position in the market. For instance, in September 2019, Evonik Industries invested in Meditool, a Chinese startup involved in 3D printing for medical applications. Meditool has developed software that can read and process images directly from MRI or CT scans. The software generates a readily printable 3D model and is sent to the printer to be 3D printed with polyetheretherketone supplied by Evonik. Some prominent players in the global medical polyetheretherketone market include:

This report forecasts revenue and volume growth at the global, regional, and country levels and provides an analysis of the latest industry trends and opportunities in each of the sub-segments from 2019 to 2030. For this study, Grand View Research has segmented the global medical polyetheretherketone market report based on application and region:

How big is the Medical Polyetheretherketone market?

What is the Medical Polyetheretherketone market growth?

Which region accounted for the largest Medical Polyetheretherketone market share?

Who are the key players in the Medical Polyetheretherketone market?

b. Some of the key players operating in the Medical PEEK market include Invibio Ltd, Evonik Industries A.G., Solvay, Medtronic, and Superior Polymers

What are the factors driving the Medical Polyetheretherketone market?

b. Key factors driving the Medical PEEK market growth include the growing replacement of stainless steel and titanium with Polyetheretherketone (PEEK) in medical devices and implants and the increasing geriatric population in developed countries like the U.S, Japan, and Italy.