The global Micro turbine market size was USD 134.1 million in 2015. Increasing preference for lower emission power generation sources is expected to remain a key driving factor for the global Micro Turbine Market over the forecast period. Micro turbines offer a wide range of benefits which include compact size, ability to run on multiple fuels, fewer moving parts, and higher efficiency resulting in lower electricity costs which are anticipated to increase their demand among the end-use industries. 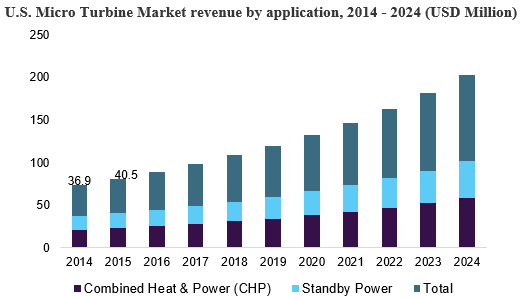 In terms of revenue, microturbine market was valued at USD 40.5 million in 2015 and is expected to reach USD 101.3 million by 2024, growing at a CAGR of 10.8% over the next seven years. Favoring government regulations with the rise of shale gas exploitations is the essential factor to foster the growth of micro turbine market in this region

With oil and gas prices stabling since the beginning of 2016, this region will start plummeting oil projects in full force. Adaptation of micro turbine systems in oil and gas projects will allow the oil and gas producers to cut down on their energy costs drastically and rise their efficiency in drilling and operational purposes.

Implemented on the 1st of January 2016, the CHP law states owners of CHP systems receive temporary funding (the CHP bonus) for the electricity produced by the cogeneration plants, provided the conditions of the funding re-met in proper articulation. With governmental regulations supporting the micro turbine market, this market is expected to have significantly high growth during the forecasted period.

The increasing need for energy sources coupled with growing environmental concerns including pollution levels and global warming is expected to further facilitate product development in emerging economies including China, Malaysia, and South Korea. Decommissioning nuclear plants in developed regions mainly Europe is anticipated to drive overall market demand in the near future.

Fluctuating oil prices are expected to restrain the overall industry growth in the near future. In recent years, crude oil prices have drastically decreased, which has negatively impacted market revenues. Industrialization in the Asia Pacific and the Middle East is expected to establish as a major opportunity for development over the forecast period. A high level of competition from currently present distributed generation equipment is anticipated to challenge the market growth in the near future

Combined heat & power dominated the application segment and covered more than the majority of the share in the global market. The segment is expected to witness the highest growth from 2016 to 2024. Standby power application is expected to dominate commercial use in order to avoid losses occurring due to conventional power failure. The hybrid vehicle market is anticipated to provide bright prospects in the near future.

Passenger vehicle usage in the U.S. and New Zealand has significantly propelled the microturbine market. Increasing environmental concerns including global warming and pollution levels are anticipated to increase product demand for CHP over the forecast period. The industry also comprises standby power application division which is expected to boost at a CAGR of 10.7% from 2016 to 2024

50 kW-250 kW micro turbines were the leading power rating sector and are expected to witness significant growth over the forecast period. The segment accounted for a revenue share of around 38.0% in 2015.

This range of products is used mainly for domestic utilities but also finds its usage in the small commercial establishments for boiling and heating purposes. The prime reason, this product will witness growth is due to its properties of utilizing less energy, which decreases the energy expense of household consumers

Industrial was the leading end-user division as micro turbines are widely used in various industries including oil & gas, construction & manufacturing, pharmaceutical, wastewater treatment, and mining. The segment is expected to enhance at the highest rate of 11.1% from 2016 to 2024 in the near future on account of developments in these industries mainly construction and oil & gas 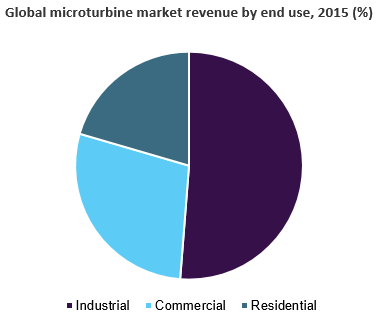 The global commercial microturbine installation is expected to witness a CAGR of 10.7% from 2016 to 2024. Residential applications accounted for 20.48% market share in 2015. Residential usage largely depends on the easy availability of natural gas.

North America Micro Turbine Market led the global industry and accounted for over 35% of total market revenue in 2015. The regional demand was mainly driven by higher consumption rates in U.S. construction, mining, wastewater treatment, and pharmaceutical industries. Canada and Mexico are expected to augment at significant CAGRs over the forecast period. Shale gas developments in the region are also anticipated to significantly contribute to industry development in the near future.

The regional demand was followed by Europe, which accounted for a revenue share of approximately 25.4% in 2015. Germany, UK, and Russia contributed significantly toward regional product demand. Stringent environmental regulations are expected to positively impact industry development in the near future. Statistics validate that countries like the Netherlands, Finland, Norway, and others are already embracing micro turbines systems and will continue to do so in the foreseeable future in light of the governmental policies in these countries favoring clean fuel technology.

Another significant factor that will credit the growth of this market is the U.K.’s exit from the European Union in 2016. Asia Pacific is expected to develop at the highest CAGR from 2016 to 2024 on account of increasing electricity tariff rates coupled with depleting energy resources. Government initiatives to improve energy infrastructure is anticipated to further enhance market revenue in the near future.

Key manufacturers operating in the global Micro Turbine Market include Bladon Jets, Brayton Energy LLC, Capstone Turbine Corporation, Toyota Motor Corporation, Microturbine Technology BV, Flexenergy, Inc., Calnetix Technologies LLC., Ansaldo Energia S.P.A., ICR Turbine Engine Corporation, NewEnCo., Eneftech Innovation SA and Wilson Solarpower Corporation. In the near future, the manufacturers will shift their focus toward expanding their business and enter into the distribution of the products. Therefore, the level of forward integration is anticipated to be high in the near future.

Companies mostly procure these components from various vendors and believe in assembling them as per the customer requirements. Other form of raw material sourcing is through backward integration, in which companies design and develop the spare parts by themselves. This involves huge capital investment and bigger players such as Toyota Corporation have been able to implement it successfully. The raw materials for such backward integrated process flow are alloys and metals used for component manufacturing

Expansion and acquisitions are expected to establish major strategies adopted by companies. Supplier power is anticipated to remain high on account of the availability of a wide range of end-users including oil & gas, construction, manufacturing, wastewater treatment, mining, and pharmaceutical

This report forecasts revenue growth at global, regional & country levels and provides an analysis of the latest trends in each of the sub-segments from 2014 to 2024. For the purpose of this study, Grand View Research has segmented the Micro Turbine market on the basis of technology, application, end use, and region: