The Middle East and Africa corrosion protection coating market size was estimated at USD 671.3 million in 2017. It is anticipated to register a CAGR of 6.0% during the forecast period. Rising investments in executing existing construction plans, as well as development of manufacturing hubs that manufacture products meant for export-oriented industries, such as food and beverages, oil and oil products, and assembled machinery, is likely to propel the demand.

Growing utilization of epoxy-based paints and coatings in manufacturing industries for general application to induce regular corrosion protection is relied upon to drive the business development over the forecast time frame. Additional advantages of epoxy-based coatings, for example, enhanced sturdiness and strength are anticipated to further fuel the demand over next seven years. 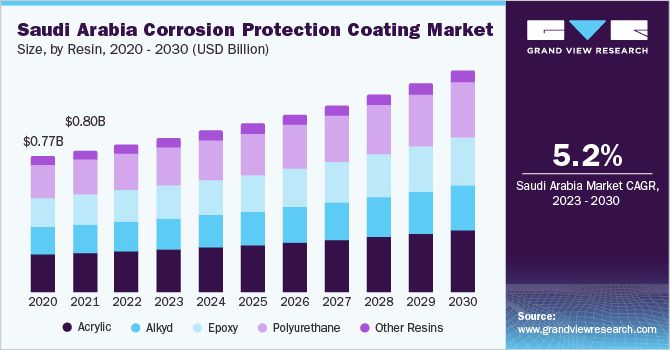 Mega-cities like Dubai have seen a surge in the hospitality market and the trend is expected to continue in the coming years. This is indirectly projected to propel the requirement for coatings over the forecast period as initiatives such as nine-point plan, which focuses on the effective implementation of higher-impact industrial action policies, is likely to support industrial development, enabling growth of manufacturing hubs across Africa.

As countries like Saudi Arabia are rapidly developing their urban infrastructure, the growing investment in business complexes, corporate offices, as well as luxury hotels is anticipated to fuel the demand for protective coatings over the forecast period. Such investments include the Dubai Water Canal, the Expo2020, Dubai Parks and Resorts, and the IMG Worlds of Adventure, which are likely to attract more tourists - domestic as well as foreign - creating a demand for luxury hotels.

The corrosion protection coatings represent a significant share in the industrial coatings segment on account a few specific attributes. These incorporate UV light, abrasion, resistance towards heat and chemicals, enhanced sturdiness, and dimensional stability. In addition to the above-mentioned characteristics, superior weathering towards spillage of chemical and mild industrial environment combined with adherence of these products to steel structures at elevated temperature is anticipated to enhance the products demand.

Rising demand for VOC free powder and fusion fortified epoxy materials for industries that includes pipeline installation in oil and gas is anticipated to push the business throughout the following seven years. Rising stipulation for waterborne solvent products on account of low toxicity and flammability is likely to drive the demand over the forecast period. Moreover, rising R&D speculation to create bio-based epoxy resins is probably going to fuel development over the forecast years.

In 2017, the oil and gas industry accounted for over 17% of the MEA corrosion protection coating market share in terms of revenue. Population growth in Middle East and Africa, which has resulted in the growth of consumer class, is expected to spur the demand for energy in the long run. This is likely to drive exploration activity on a global level, thereby boosting the industry focus on acquiring new acreages. Innovative breakthroughs have also made it conceivable to develop colossal assets.

On the basis of product, the market is segmented into alkyd, acrylic, epoxy, polyurethane, and zinc. Epoxy accounted for over 55.3% of demand in terms of volume in 2017, and is anticipated to expand at a CAGR of 5.4% over the forecast period. Epoxy resins has most common application in flooring for construction and civil engineering sector, with its primary requirement in industrial areas and public spaces with varied level of public traffic and environment which includes shopping malls, institution, schools, prisons, sports hall, and industrial buildings.

Polyurethane is anticipated to expand at a CAGR of 7.4% in terms of revenue over the forecast period. Polyurethane is the fastest growing ink resin polymer owing to its excellent characteristics and increased usage in manufacturing of energy-curing inks. Its superior properties include degree of dissolving eco-friendly solvents, appreciably high heat-resistance, its treatment by water boiling and retorting and compliance with stringent requirements for the high-performance gravure reverse inks. This resin is widely used in UV curing inks, which have witnessed huge demand with change in consumer preference for energy efficient products.

Acrylic resins segment accounted for 18.12% of market share in terms of volume in 2017 and is anticipated to register a CAGR of 5.6% over the forecast period. Demand for acrylic resins is indirectly dependent on the economic prosperity of various downstream and upstream applications, such as paints and coatings, paper and adhesives, textiles, in addition to personal care products, detergents, superabsorbent polymers, and wastewater treatment chemicals, among others.

Solvent borne segment accounted for over 83.3% of market share in terms of volume in 2017, and is anticipated to register a CAGR of 5.5% over the forecast period. Solvent borne products represented a significant market share, having demand in various industries including manufacturing, automotive and construction attributable to its superior cohesiveness and thin film application.

Rising industrialization combined with developing utilization of steel in plant fabrication is likely to be the key growth drivers for corrosion protection coatings over the projected time frame. However, highly toxic nature due to the presence of high VOC content and higher combustibility is anticipated to limit the market growth over next seven years. Besides, advancement in developing environment friendly water borne products as a substitute to solvent borne products is expected to pose a challenge to the market growth.

Waterborne coatings is anticipated to be the fastest growing segment with a CAGR of more than 5.7% from 2018 to 2025. Waterborne products represented more than 9.4% of the market share in 2017 in terms of volume. Advantages over solvent borne products including lesser toxicity with enhanced air quality and brighter appearance are likely to drive the demand over the forecast years. Rising application scope in all the end-use industrial applications including general automotive OEM, general industrial sheet metal packaging, and refinishing of automotive is anticipated to fuel the market.

Powder-based products accounted for over 7.3% of the market share in terms of volume in 2017. The segment is anticipated to expand at a CAGR of 7.4% over the forecast years. The demand for powder-based products is expected to witness significant growth primarily owing to its superior properties over conventional paints including high resistivity towards corrosion and chipping and abrasion, durability, cost-effective, excellent finishing, and reduced processing time.

High adoption of the technology in the construction sector on account of low operational costs, excellent performance wide color availability, and custom properties such as anti-bacterial and anti-corrosion functions will facilitate market growth over the forecast years.

Petrochemicals, oil & gas, energy, construction, marine, civil, municipal and others are the key application areas. In 2017, construction held the dominant market share of around 24.5% in terms of volume.

Improvement of market condition post-recession era in Middle East is expected to witness steady growth over the forecast period owing to growing constructional activities in emerging economies. Growing number of residential and commercial buildings, population, and urbanization mainly in Saudi Arabia and South Africa is expected to drive the market over the forecast period. 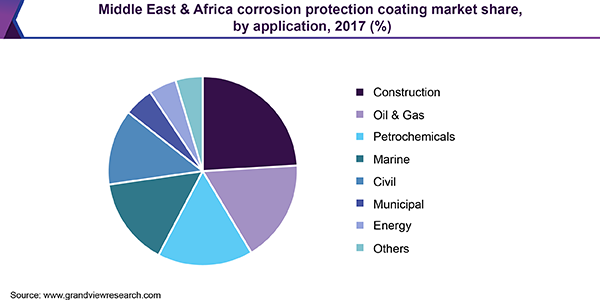 Corrosion protection coatings are majorly used in all metallic heavy machineries employed in producing electricity via wind mills and solar panels. Fast development of solar based photovoltaic (PV) installations combined with growing interest for power sources that are renewable has overseen surge in requirement of solar panels and therefore is expected to fuel corrosion protection market growth over the forecast period. Increasing awareness for self-sufficiency and energy security along with favorable government legislations is expected to market expansion in the region.

Increasing activities, such as construction of dams, railway networks, and highway is likely to propel the product demand over the forecast years. Middle East and Africa region is characterized by the presence of a large number of water and wastewater treatment plants due to the absence of significant freshwater sources. Rising per-capita consumption of water in the region coupled with rise in population due to increased immigration is expected to drive the growth further.

The development of commercial structures, such as the Dubai Mall and Mall of the Emirates illustrates the prospects of more futuristic development in business complexes in the region. A significant share of retail development pipeline in Dubai, with approximately 13.3 million sq. ft. GFA currently in the stage of execution, is expected to reach practical completion by 2019. The presence of a number of single ownership assets having the potential to secure pre-lets form large corporate occupiers is projected to help develop commercial infrastructure. This, in turn, is likely to boost the requirement for the products in the near future.

In terms of country, Saudi Arabia led with a market share of 18.6% in terms of revenue in 2017 and is anticipated to continue the dominance over the foreseeable future. Objectives like the World Expo trade 2020, where destinations such as, Dubai are prime focus, aims to spend over $8.4 billion on the six-month event with a huge exhibition center, new hotels and expanded transport infrastructure.

Construction upswings in the gulf regions have let to new expansion plans across Saudi Arabia by coating manufacturers, thereby, facilitating the increasing demand. The construction sector in Saudi Arabia is likely to remain the cornerstone for coatings industry, but the overall market will facilitate a broader set of industries. It is anticipated to serve a more diversified gulf economy that is less dependent on oil and gas and seeking out opportunities in the downstream manufacturing sector.

UAE accounted for over 10.3% market share in terms of volume and is expected to register a CAGR of 5.3% over the forecast years. Rapidly growing population and migration of people with relatively high-income opportunities have ramped up the construction industry growth over the last decade. Regional economic slowdown with lull in the domestic construction sector has substantially weakened the product demand recently.

The paint and coatings industry in UAE has reaped rich dividends from the rapid construction activities which is catered by leading multinationals paint companies and a handful of domestic producers. Growing quest of Emirates in making some of the largest, tallest and biggest structures is likely to propel the requirement of corrosion protection products in near future.

Rise in the demand for protective coatings in the form of solvent, waterborne, and powder in automotive, oil and gas and marine applications is expected to fuel growth. Emerging regional players especially in developing countries are estimated to gain ample opportunities to enter the market. Rise in the government initiatives coupled with foreign investment in developing automotive, construction, and power sectors mainly in Saudi Arabia, South Africa, and Oman is further expected to propel product demand.

As of 2017, PPG Industries, Jotun A/S and BASF Coatings were the leading manufacturers. BASF is involved in manufacturing chemicals, plastics, performance products, and coatings. The BASF group operates in over 80 countries. In June 2016, BASF signed an agreement to acquire a German company Chemetall that produces metal surface coatings for USD 3.2 billion.

This report forecasts revenue growth at regional and country levels and provides an analysis of the latest industry trends in each of the sub-segments from 2014 to 2025. For the purpose of this study, Grand View Research has segmented the Middle East and Africa corrosion protection coating market report on the basis of product, technology, application, and country: