The Middle East movies and entertainment market size was valued at USD 1.86 billion in 2020. It is expected to expand at a compound annual growth rate (CAGR) of 8.5% from 2021 to 2028.The market is anticipated to be driven by the increasing popularity of 3D movies that give the audience an experience of Virtual Reality (VR). The introduction of new marketing and distribution platforms such as IPTV, digital newspapers, DTH, and digital cable, as well as the online sales of music and movies, is anticipated to boost industry progress. Major players have adopted strategies like regional expansions and distribution partnerships to venture into untapped markets. A number of these players have now been focusing on the production of regional content to establish a strong connection with the audience in these markets. 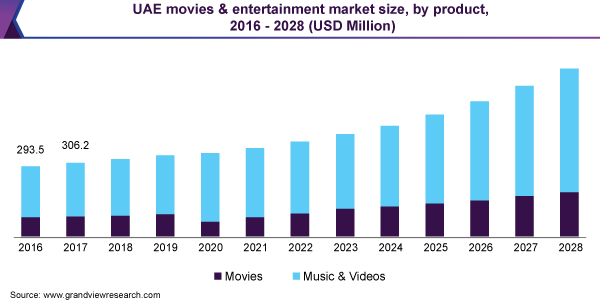 The trend of diversifying content for cinema and television creations is gaining much traction in the market. Competitors are looking beyond traditional mediums to establish stronger connections with the audiences. Rising demand for regionalization also provides a broad range of themes and genres for filmmakers. Larger studios have been investing in and adopting enhanced promotional and marketing strategies that use advanced digital technology for communication. A rapid increase in the streaming of music, movies, and television series has created new opportunities for players to expand their business. The emergence of official online streaming service providers and channels is anticipated to prevent the losses incurred by artists and producers.

However, revenue generation in the media and entertainment (M&E) industry is restricted to a certain extent due to high piracy rates and lower profit margins through online streaming. However, developments in cybersecurity laws and tightening legal actions against piracy are expected to reduce the losses for the players. This is also likely to encourage new players to enter the online streaming business.

Easy access to an evolving and increasingly varied audience through platforms such as TV and internet streaming has also encouraged new talents to come up. Increased adoption of mobile communication and the internet in countries such as China, South Korea, and India drives the progress of movies and entertainment in emerging markets. The lucrativeness of these emerging markets is further driven by the stagnation in mature markets such as the U.S.

In terms of value, music & videos dominate the market with a share of around 82% in 2020. This high share is attributed to the fact that television has been a strong, growing, and increasingly dynamic industry in the Middle East with a surge in the total number of channels. Though Pay TV and other on-demand services constitute a small portion of the industry, as compared to other countries across the globe, these are expanding at a notable rate. IPTV digital services provided by telecommunication companies are also becoming popular in the region. 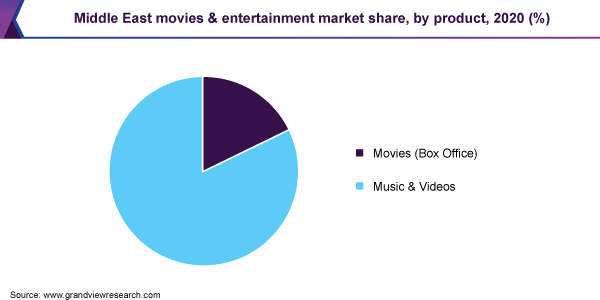 The movies segment is projected to register the highest CAGR of over 14.0% over the forecast period. The Middle East represents one of the fastest-growing regions for movies (box office), with a rising consumer inclination toward regional content. As per mideastmedia.org, movie content from outside the region claims the majority of cinema revenues. However, a significant proportion of Arabic titles are screened in the region. As per Doha Film Institute, a robust independent film scene is being witnessed in the Arab world, reflecting a far greater variety than the relatively homogeneous mainstream cinema that has been the custom in the region.

In terms of value, Saudi Arabia dominated the market by accounting for over 25% of the revenue share in 2020. This high share is attributed to the increasing investments from international players owing to the country’s prospect for cinema is driving the market. Moreover, around one-third of the total Saudi Arabian population are expatriates, largely centered around the provinces of Riyadh and Makkah, with Non-Saudis constituting 38% and 42% respectively, according to the General Authority for Statistics. Saudi Arabia is home to ~3 million Indians, which is the largest expatriate community in the country. As a result, content screened in Saudi Arabia is expected to range from global Hollywood blockbusters to Bollywood, as well as regional and local films. This is estimated to drive the demand for screens and online screening of content in the country.

UAE is projected to expand at a CAGR of 9.0% from 2021 to 2028. The growth is driven by the growing population, increasing investments in cinema, and surge in demand for local content in the country. Furthermore, the presence of various media companies such as Vox Cinema and Novo Cinemas, as well as over-the-top (OTT) media service companies, is driving the market growth in the country.

Many market players are adopting strategies such as new and revolutionary content launches to strengthen their position and to drive revenue growth. In May 2020, beIN SPORTS announced the launch of a standout new beINSPIRED podcast that celebrates trailblazing female athletes, all of whom have paved the way for present and future female athletes to keep breaking barriers. The beINSPIRED podcast delves into the inspiring stories of female athletes worldwide, such as Paris Saint-Germain’s Nadia Nadim and Chelsea FC captain and Olympic silver-medalist Magdalena Eriksson. Some of the prominent players operating in the Middle East movies and entertainment market are:

This report forecasts revenue growth at regional and country levels and provides an analysis of the latest industry trends and opportunities in each of the sub-segments from 2016 to 2028. For this study, Grand View Research has segmented the Middles East movies and entertainment market report based on product and country:

How big is the Middle East movies and entertainment market?

What is the Middle East movies and entertainment market growth?

Which segment accounted for the largest Middle East movies and entertainment market share?

b. Saudi Arabia dominated the Middle East movies & entertainment market with a share of 25.1% in 2020. This is attributable to the increasing investments from international players owing to the countryâ€™s prospect for cinema.

Who are the key players in the Middle East movies and entertainment market?

What are the factors driving the Middle East movies and entertainment market?

b. Key factors that are driving the Middle East movies & entertainment market growth include the increasing popularity of 3D movies that give the audience an experience of virtual reality. Additionally, the introduction of new marketing and distribution platforms such as IPTV, digital newspapers, DTH, and digital cable, as well as the online sales of music & movies, is anticipated to boost industry progress.