The global mixed reality market was valued at USD 38.15 million in 2015

The key application segments analyzed and reported in the study include automotive & aerospace, medical, entertainment, e-commerce & retail, and other associated applications. The Mixed Reality (MR) market is expected to witness a substantial growth over the forecast period, owing to advances in hardware technologies and sophisticated mobile software. Incipient trends, such as MR, Internet of Things (IoT), and the rising conjunction between the wearable device fabrications, are anticipated to drive the market growth. The convergence amongst these technologies may provide more interactive and immersive experiences. The increasing number of advanced wearable devices could potentially make the human-world interaction more immersive and realistic. 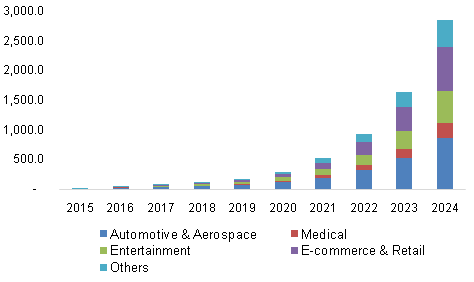 MR manufacturers require raw materials such as displays, sensors, processors, and cameras, among other components. There exists a moderate degree of vertical integration between the raw material suppliers and the manufacturers.

The increasing adoption of MR in architecture and interior designing is another emerging trend in the industry, which is expected to significantly impact the market growth. MR in architecture refers to the layering of computer simulation models over the physical arrangement of the present surroundings and using that information to improve process efficiency. This technology can dramatically enhance the standard supply chain. For example, the MR technology can make the product repair and reverse logistics processes much simpler. It could help the entry-level tech to instantly identify problems and incorrect circuits with a given product.

The Martine Jarlgaard London show at the London Fashion Week (LFW) would be incorporating the use of Microsoft HoloLens to enable the audience to view their spring summer collection 2017 in mixed reality. This novel appearance of the mixed reality technology at the London Fashion Week is with the intention to reimagine the catwalk show. The incorporation of the MR technology in fashion is anticipated to eliminate the barrier between the physical location and the audience, thereby allowing the audience to move about freely and explore the assortment from all angles while it appears real, solid, and lifelike before their eyes.

MR is in its nascent stage and companies are profoundly investing in its R&D operations as well as setting up centers to develop and analyze innovative technologies and gain a competitive advantage. The MR industry positions frontward favorable growth prospects, offering dynamic application platforms that are still unmapped. In order to gain a substantial lead over their arch rivals, the companies in this segment finance on deploying R&D ingenuities that are devoted to technical and business innovations.

Hardware is expected to witness a significant growth over the forecast period due to an increase in the development of the advanced MR hardware. The MR hardware includes sensors, processors, and displays. Companies in the AR market, such as MAGIC LEAP, INC. and Microsoft Corporation, are expected to commercialize their MR devices in 2016, which may drastically impact the growth of the hardware segment. Furthermore, several companies, such as Intel Corporation, are working on enhancing the quality of semiconductor chips and the processors used in MR devices.

The automotive and aerospace application segment accounted for over 46.8% of the global market in 2015

Market segmentation, on the basis of applications, includes automotive & aerospace, medical, entertainment, e-commerce & retail, and others. The automotive and aerospace segment is anticipated to be one of the leading industry segments with over 46.81% of the overall industry share in 2015.

For example, in April 2016, BMW Group (Germany) introduced a mixed reality system into the automobile design that has been developed entirely using the equipment from the computer gaming industry. This system promises noteworthy benefits over the virtual reality systems that have existed to date, thereby delivering virtual reality on developer workstations.

BMW has chosen to integrate the HTC Vive VR headsets and mixed reality technology into the design and R&D of new vehicle models. BMW service engineers use head-mounted displays while functioning on cars. MR projections teach these engineers about what tools to use and how to carry forward the work.