The global motorcycles market size was valued at USD 104.1 billion in 2021 and is estimated to rise at a compound annual growth rate (CAGR) of 7.4% from 2022 to 2028. The launch of effective products, the surge in sportbike users, and the rising trend of customization are the key factors driving the market growth. Moreover, the rising disposable income of consumers and improvement of living standards led to the use of private motorcycles instead of taking public transportation isthe factor that pouring the market growth. 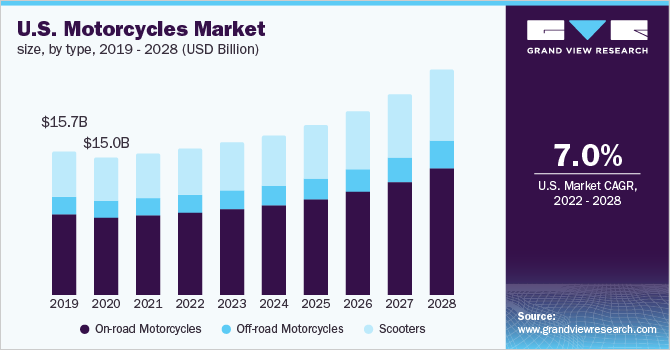 A motorcycle also known as a motorbike or bike is a two-wheeled motor vehicle manufactured with metallic and fiber frames. The design of the motorcycles differs significantly to outfit a variety of purposes such as sports activity, commuting, long-distance travel, racing, and off-road riding. Demand for effective and reasonable modes of transportation is expected to increase considerably in the upcoming years as the world’s middle-class population expands. Motorcycles are largely being seen as a feasible option, and therefore, demand for motorcycles and scooters is estimated to increase. Demand for motorcycles and a scooter has augmented considerably in rural areas as a result of growing disposable income and lack of well-established public transportation.

The COVID-19 pandemic negatively impacted the market. The global market in 2020 saw a fall in user sentiment due to the pandemic which led to a double-digit decline from the preceding year in the major countries such as India, Vietnam, the Philippines, and Thailand. This was due to the shutting off of plants in top motorcycle manufacturing nations such as China, Japan, India, and ASEAN. Manufacturing operations were stopped, and the supply chain was disturbed, causing a fall in motorcycles exports during the pandemic. However, manufacturers are optimistic that following the end of the lockdown period, commuters will more likely avoid public transport, boosting the demand for private vehicles, including motorcycles, which in turn could increase the demand for motorcycles during the forecast period.

The scooters segment is expected to witness the 2nd highest CAGR of 7.2% from 2022 to 2028. The rising popularity among users seeking a comfortable ride with the gearless driving system and at low operating costs as compared to the motorcycles. Also, the easy accessibility of petrol, remarkable mileage, and safe long-distance travel developed scooters as an everyday traveler vehicle. Thus, the scooters demand is increasing steadily and is expected to grow at a considerable CAGR during the forecast period.

Europe is forecast to register the 2nd highest CAGR of 7.3% from 2022 to 2028. According to the European Association of Motorcycle Manufacturers (ACEM), major countries in Europe such as Germany, Italy, France, the U.K., and Spain account for about 80% of motorcycle registrations in 2020. Germany is a beneficial market for motorcycle manufacturers, due to the advanced manufacturing hubs and better demand for different types of motorcycles. The growing inclination toward high-end motorcycles has boosted demand for cruisers as well as sports motorcycles in Europe, with the trend estimated to last over the forecast period. Thus, the market in Europe is expected to grow at a considerable CAGR during the forecast period. 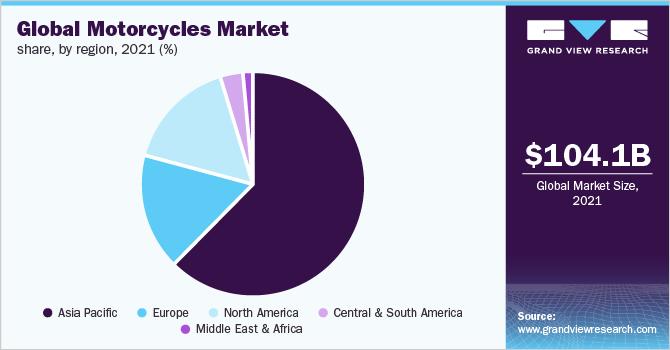 Regional analysis revealed that the Asia Pacific accounted for a significant market revenue share of more than 60% in 2021. Due to rapid urbanization as well as heavy Chinese and Indian customer acceptance, Asia Pacific accounted for the maximum share of the global demand in 2020. According to Infineum International Limited, India, China, Indonesia, and Vietnam are the major countries, that generated maximum revenue for the market in the Asia Pacific. China and Taiwan are prime locations for the manufacture of these motorcycles due to their high processing capacities and sufficient raw materials. Thus, the demand for motorcycles is high in the Asia Pacific and it contributes to more revenue generation in this region.

The market is characterized by the existence of established as well as new companies. Most of the key companies are expanding their manufacturing globally to capture the rising demand for motorcycles. Prominent Japanese companies such as Honda, Yamaha, Suzuki, and Kawasaki have rolled out their variants of electric scooters, further intensifying the competition in the Asian market. Some of the other strategies include expansion measures such as collaborations and new product launches. For instance, Harley-Davidson Incorporation recently launched eight new versions of Softail cruiser motorcycle and five new versions of touring motorcycles thus growing its product portfolio. Moreover, BMW launched the new ACC system in 2020. The new BMW Motorrad Active Cruise Control (ACC) is expected to provide utmost comfort and safety to the rider. Some of the prominent players in the global motorcycles market include:

This report forecasts revenue growth at global, regional, and country levels and provides an analysis of the latest industry trends in each of the sub-segments from 2017 to 2028. Grand View Research has segmented the global motorcycles market report based on type, and region:

How big is the motorcycles market?

What is the motorcycles market growth?

Which region accounted for the largest motorcycles market share?

b. Asia Pacific dominated the motorcycles market with a share of 62.5% in 2021. This is attributable to large consumer base in India, China, Indonesia, Vietnam contributing to the regional market share in the global market.

Who are the key players in motorcycles market?

What are the factors driving the motorcycles market?

b. Key factors that are driving the motorcycles market growth include increasing spending of consumers, the surge in sportbike users, and the rising trend of customization.