The global public transportation market size was valued at USD 206.7 billion in 2021 and is expected to expand at a compound annual growth rate (CAGR) of 5.9% from 2022 to 2028. The market is significantly driven by vital economic growth across the world. Over the past few decades, population migration into the urban areas and the expansion of urban/metro cities are rapidly increasing. According to the United Nations data, around 55% of the world’s population lived in urban areas in 2018, and according to the projections, the figure is expected to reach 60% by 2030. This vast migration is anticipated to propel market growth. The market growth can be attributed to infrastructure development and technological advancements across the world. Bus rapid transit, metro, monorail, and light rail transit are being implemented by various governments to cater to the demand for public transportation in megacities, increasing public ridership and boosting the market growth. 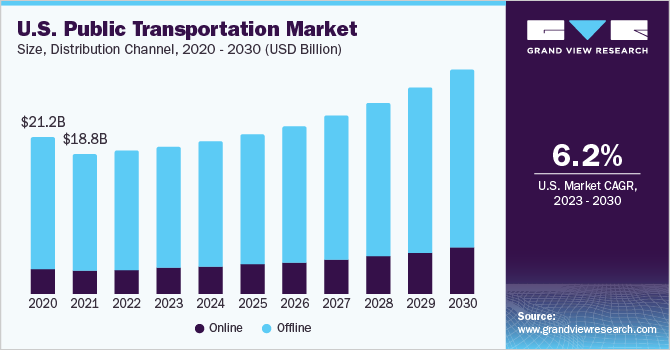 The market growth is restrained by the increasing commute preference for passenger cars and two-wheelers. Two-wheelers are a popular type of commute mode preferred by the middle-income class in developing nations including India, Vietnam, and Bangladesh. Additionally, biased political systems toward public transport investments hamper the global market growth.

The Covid-19 pandemic affected global public transportation, negatively impacting the market growth in 2020. With the spread of the Covid-19 infection, commuters preferred to use private and personal means of travel, declining public transport ridership steeply across the world. The market is expected to witness recovery in the forecast period under the shadow of the Covid-19 pandemic and exhibit a steady growth rate.

The offline channel held the largest revenue share of over 80.0% in 2021. Offline is an established channel and has been used for a long time by operators and consumers. Many players and consumers use the offline distribution channel of ticketing for public transit, notably in developing nations. Additionally, the lack of platforms for the online distribution of tickets and the reluctance of consumers to adopt online solutions due to the personal and financial privacy issues are fueling the growth of the offline channel.

The online segment is anticipated to register a lucrative CAGR of 8.9% from 2022 to 2028. The segment growth can be attributed to the penetration of internet services, increasing affordability of smartphones, and increasing dependency on digital solutions. Over the forecast years, Generation z and millennials who are tech-savvy are expected to dominate the commuter’s numbers. In addition, the expansion of the digital solution companies providing online platforms is likely to boost the segment growth.

The road segment accounted for the largest revenue share of over 55.0% in 2021. Widespread availability and higher ridership of the road transport system mainly consisting of buses, trolleybus, etc. are contributing to the growth of the segment. Bus rapid system implemented in some megacities across the globe aims at providing flexible, reliable, and faster transit, and also contributes to the growth of the road segment. 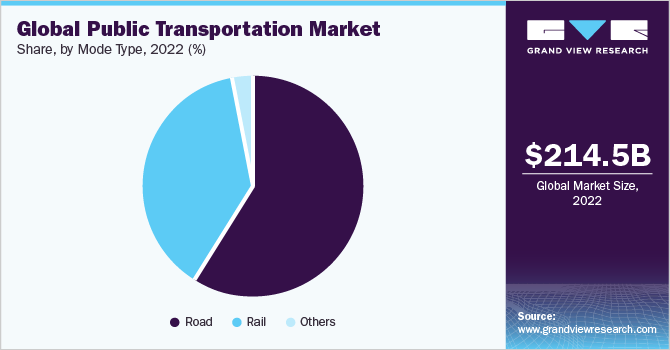 The rail segment is anticipated to register a lucrative CAGR of 6.3% from 2022 to 2028. The segment growth is mainly fueled by the increasing spending and investments to build the infrastructure for rail transport, notably the metro system and light rail transit. For instance, in India, various metro projects are under construction, including Pune Metro, Patna Metro, and Ahmedabad Metro.

The Middle East and Africa is anticipated to register the second-highest growth rate of 6.0% over the forecast period. Increasing spending, investments, and government initiatives are expected to boost the regional market growth. For instance, in Gulf Cooperation Council (GCC), authorities are aiming at improving public transportation with an integrated network of metro and BRT.

Small and local players play an important role in the highly fragmented market. Key companies are focused on adopting and implementing new and cutting-edge technologies. With the real-time arrivals of the metro, bus, and light rail, smart ticketing, and digital apps are being launched by the operators and governments to enhance the experience and efficiency of public transportation. For instance, Berliner Verkehrsbetriebe launched Jelbi app in September 2019, combining and integrating different types of transportation in Berlin under one platform. Contactless ticketing is gaining momentum with the growth thrust due to the Covid-19 pandemic. For instance, INIT Innovations in Transportation Inc. extended contactless ticketing for Nottingham buses and trams in the U.K. as reported in September 2021. Some prominent players in the global public transportation market include:

This report forecasts revenue growth at the global, regional, and country levels and provides an analysis of the latest industry trends and opportunities in each of the sub-segments from 2017 to 2028. For this study, Grand View Research has segmented the global public transportation market report based on distribution channel, mode type, and region:

How big is the public transportation market?

What is the public transportation market growth?

Which segment accounted for the largest public transportation market share?

Who are the key players in public transportation market?

What are the factors driving the public transportation market?

b. Key factors that are driving the public transportation market growth include increasing population migration into the urban areas and expansion of urban/metro cities are rapidly increasing, and infrastructure development and technology advancements across the world.