The global move to earn fitness apps market size was valued at USD 391.7 million in 2021 and is projected to grow at a CAGR of 18.3% during the forecast period. The market is experiencing growth due to the rise in the adoption of smartphones by people of all income groups. Smartphones have evolved from being devices of communication & entertainment to devices that can monitor health and fitness. 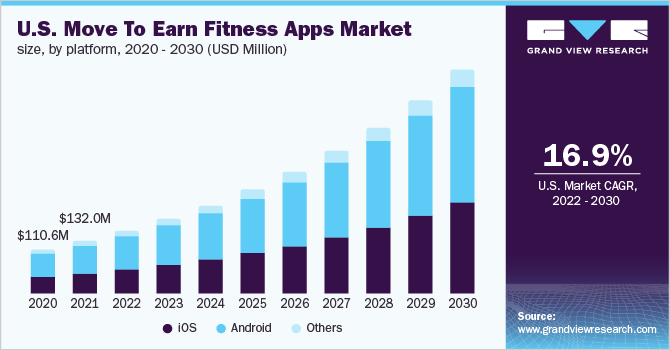 Factors such as increasing expenditure in the healthcare sector, growing prevalence of obesity, and increasing percentage of athletes are motivating organizations to develop new models for workout regimes, which positively impact the market growth. The introduction of 3G & 4G network infrastructure along with the introduction of 5G networks in economically stronger regions is also driving the market growth.

Moreover, the introduction of modern technologies, such as machine learning, artificial intelligence, and augmented reality, in the health and fitness space has revolutionized the fitness industry. These technologies have changed the way individuals exercise at home instead of visiting gyms and fitness clubs to keep themselves fit & healthy. Availability of modern apps are offering all fitness modes, including meditation, aerobics, yoga, Zumba, and weight training.

This growth is driven by the entry of new users adopting healthy lifestyle regimes. The rise in awareness about various fitness platforms in the countries, the growing percentage of fitness & sports enthusiasts, and the increase in spending by the population on healthy lifestyles are some of the aspects that are fueling the growth of the move to earn fitness app market.

Technology is rapidly transforming this industry. Technological advancements are expected to cause an increase in the number of platforms for fitness enthusiasts, thereby aiding market growth. Multiple startups are entering the market with innovative technologies, which is a major factor boosting market penetration and consumer adoption.

The sudden outbreak of COVID-19 significantly transformed the views of people on a healthy lifestyle. The rise in awareness regarding health and hygiene and the closing of gyms and other activity centers to maintain social distancing led to a large population opting for home fitness apps to track activities and earn currencies, vouchers, and others. However, several factors such as lack of digital literacy & skills, network coverage, and security as well as trust barriers regarding data privacy are hampering the growth of the market for move to earn fitness apps in most regions.

Based on the platform, iOS held the largest market share of 46.8%. An increase in the penetration of smartphone users globally is a major parameter contributing to the growth of this segment. The enlargement of the segment during the past few years can be attributed to the high adoption rate of iOS devices all over the world. For instance, active users of Apple devices grew to more than 1.5 billion in the first fiscal quarter of 2020from about 1.4 billion in the first fiscal quarter of 2019.

However, the segment for Android is expected to grow at the highest rate of 18.6% during the forecast period owing to the increased adoption of this platform, especially, in developing economies. Growing disposable income is leading to a rising adoption rate of smartphones, which is further expected to proportionately scale up the use of these apps. As per the report of Economics Times, the smartphone base of India is projected to reach 820 million, thus, positively impacting the segment’s growth.

Smart phones held the largest share of 67.2% in 2021. This can be attributed to increase in the adoption of smartphones among consumers in the past few years. Increasing usage of the internet on smartphones is contributing to segment growth. Several fitness trackers, such as Apple Watch, Fit bit, Polar watch, and Garmin, are used with standard smart phones to track users’ location and monitor their activities, including running, calorie intake, calorie burn, workout reminders, & workout planner to accomplish the overall fitness goal.

With the advancement in technology in the fitness industry, a wide range of people are switching to their smartphones instead of going to gyms and other activity clubs to improve their regular workout routines. Accessibility of these platforms through smartphones reduces the cost of training and also helps them to earn goodies, currencies and others, thereby supporting segment growth.

However, wearable devices are projected to grow at the fastest CAGR of 19.3% during the forecast period. The growth can be attributed to the increasing adoption of wearable devices used for maintaining fitness and advancement in technologies. Growing concern related to health is further positively impacting the segment’s growth. According to a study published in Economic Times, worldwide consumer spending on overall wearable devices is estimated to increase by 18.1% in 2021 over 2020. Consumer spending on smart watches wearable devices and smart patches increased by 17.6% and 20.3%, respectively, in 2020. This growth is driven by the entry of new users adopting a healthy lifestyle. 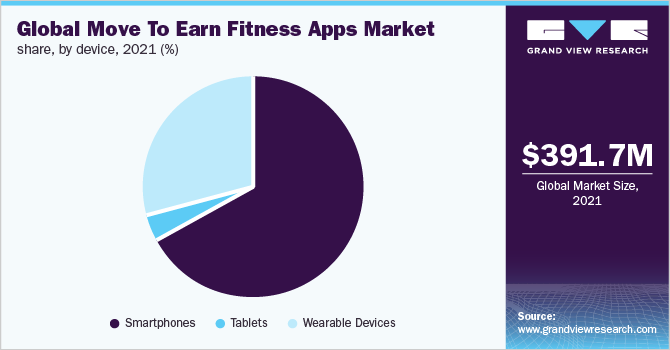 North America dominated the global market for moves to earn fitness apps in 2021 and accounted for the largest revenue share of 37.8%. Different dynamics like rapid growth in adoption of smart phones, growth in the network coverage area, rise in the penetration of chronic diseases, and increase in geriatric population are the factors driving the growth of the market for a move to earn fitness apps in North America.

The U.S. is one of the leading countries for move to earn fitness applications throughout the world. Rising per capita expenditure on healthcare is another factor driving the market. Consistent innovation in these applications is further impacting the growth positively. Technological advancements and improved features in the apps are driving market growth. 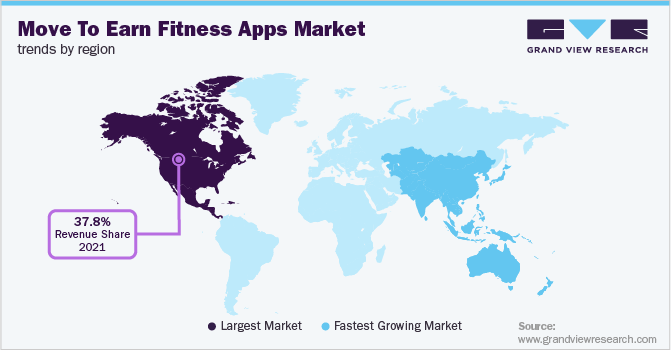 On the other hand, Asia Pacific is anticipated to register the fastest growth rate during the coming years owing to growing favorable government support and initiatives. Moreover, the rise in disposable income and a surge in the popularity of move to earn apps further fuels the growth, positively. Increasing awareness among elderly people about the benefits of such apps and monitoring the current state of health is leading to market growth.

Growing investments and rising number of startups within the region is further impacting the growth positively. For instance, India-based move to earn fitness startup, Fit mint proclaimed seed funding of USD 1.6 million in June 2022. The fund will be used for team expansion and marketing.

The major participants in the market for move to earn fitness apps are devising various strategic initiatives to expand their business footprint and gain a competitive edge in the market. The expansion of 5G connectivity will also open new opportunities for the key players. As per the report of GSMA, by 2025, there will be about 2 billion 5G connections all over the world. Currently, there are limited restrictions in terms of launching apps on Android or iOS platforms. Therefore, multiple startups are entering the market with substantial initial funding.

Moreover, high funding for fitness app technology, supportive government initiatives, and lack of stringent regulations for the launch of fitness apps, including move to earn fitness apps are among factors expected to increase the threat of new entrants in the coming years. For instance, health-tech start-up Hav raised USD 400,000 in June 2022. The funding will be used for expansion and achieving PMF (product-market fit). Some of the major market players in the global move to earn fitness apps market include:

This report forecasts revenue growth at global, regional, & country levels and provides an analysis of industry trends in each of the sub-segments from 2016 to 2030. For this study, Grand View Research, Inc. has segmented the global Move to Earn Fitness Apps Market report based on the platform, device, and region: 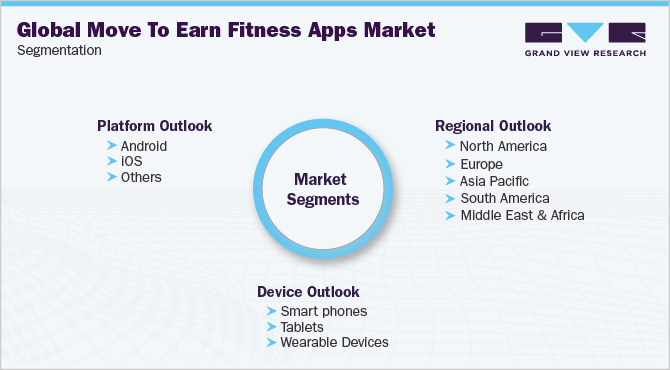 How big is the move to earn fitness apps market?

What is the move to earn fitness apps market growth?

Which segment accounted for the largest move to earn fitness apps market share?

b. The smartphone segment dominated the market with a share of 67.2%. This can be attributed to the growing world-wide adoption of smartphones and increasing network connectivity.

Who are the key players in move to earn fitness apps market?

What are the factors driving the move to earn fitness apps market?

b. Key factors that are driving the fitness app market growth include the high adoption rate of smartphones and increasing demand for continuous health assessment.