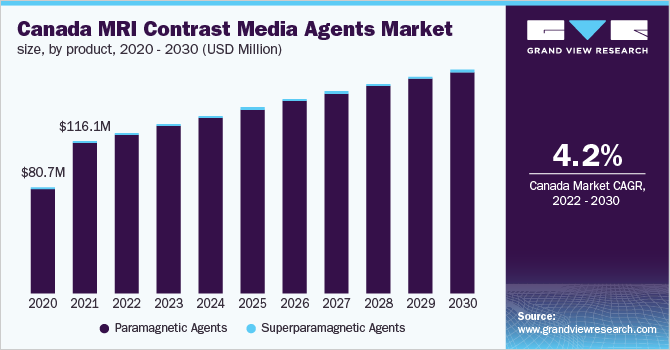 An extremely stringent guideline is laid for the clinical use of such agents, which makes their use perilous. Each contrast agent follows a unique route of administration, right from the intravenous route to oral administration. They are categorized based on their chemical composition, magnetic properties, safety, efficacy, pharmacokinetics and pharmacodynamics, and their imaging property. This market holds a high growth potential due to the enormous research and development in this space to develop contrast media agents with reduced ill effects, minimized occurrence of adverse reactions, minimal dosing, and improved imaging efficacy.

MRI scans are growing at a quicker rate across the globe and so is the use of these contrast media agents. Studies suggest that ~50-ton gadolinium contrast agents are used annually across the globe, creating a market space of ~1 billion dollars. The use of this agent is related to its unparalleled advantages of increased neurological imaging permeability, negligible waiting time before scans, high shelf stability, higher throughput, and high sensitivity to motion artifacts. Manganese-based contrast agents are also a type of paramagnetic agent, which is been highly researched in current times. On the other hand, superparamagnetic agents include iron-containing contrast agents such as ferumoxides, ferumoxtran, and ferumoxsil.

These agents have the dynamics to identify the progressions of brain tumor, liver cancer, or breast cancer and establish improved guidance during surgical intervention. Enhanced contrast media MRI procedures are likely to increase in the future as the application of MRI expands and is made available to most patients across the globe and as the information obtained from a single contrast injection increases. However, variation in practice by end-users calls for greater standardization of protocols and utilization of the latest diagnostic algorithms.

As clinicians track patients' progress and search for the underlying causes of long-term COVID-19 symptoms, MRI is anticipated to play a critical role. Contrast media was proved to be necessary for scanning not only for Covid infected patients but for those where the diagnosis or monitoring of illness couldn’t be delayed. However, there was a decline in diagnostic screening (a drop of 47.5% was noted in 2020 compared to 2019) despite the increased requirement for MRI machines in the diagnosis of Covid-19.

A decline in diagnostic screening due to cancellation of elective surgeries, temporary closure of imaging centers, and lack of active staff for conducting examinations led to the reduction in sales of contrast media agents, which negatively impacted the growth of the market. As the production of generic contrast agents increased during the pandemic, there was a decline in the cost of consumables of medical devices. The pandemic will have long-term effects, but the market remains optimistic about a recovery in equipment installations and in the number of examinations, with even more investment in health in some countries.

The paramagnetic agents segment held the largest revenue share of over 95.0% in 2021.

Most paramagnetic contrast agents are positive agents. These agents shorten the T1, so the enhanced parts appear bright on T1-weighted images. Ferumoxides, Ferucarbotran, Ferumoxtran-10, and Iron oxide-based agents are examples of this category. Highly researched superparamagnetic agents include the Superparamagnetic Iron Oxide Nanoparticles (SPIONs). However, they hold a disadvantage of being easily uptaken by macrophages.

Neurological imaging dominated the market and held a revenue share of over 25.0% in 2021 as scans produced are of superior quality than those by computerized tomography scans. The primary aim of these contrast agents is to identify target organs and specific tissues. Most gadolinium and ferumoxides agents enhance and showcase the physiochemical effects of the liver. Nearly 30 million MRI scans are conducted yearly in the U.S. Studies suggest that gadoxetic acid-enhanced liver MRI is an evolving technique with potential for non-invasive quantification of liver function and staging of hepatic fibrosis.

Gastrointestinal MRI contrast agents may be helpful in certain clinical scenarios in distinguishing bowel from intra-abdominal masses and normal organs. Combinations of oil emulsion and paramagnetic substances may be used as bowel contrast agents. These include emulsion-containing corn oil and ferric ammonium citrate and emulsion-containing baby formula with ferrous sulfate. These are palatable mixtures that distribute uniformly in the bowel.

Hospitals led the market and accounted for a revenue share of over 65.0% in 2021. Hospitals are the go-to centers for all the patients seeking major diagnostic tests around the world. All chronic illnesses are treated in hospitals. Additionally, the number of research activities conducted by hospitals and the availability of the infrastructure needed to buy and store these agents are fueling the growth of the segment. 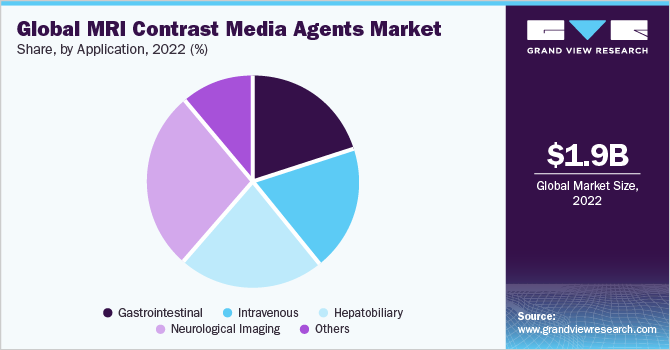 The imaging centers segment is expected to register a significant growth rate during the forecast period. Growing demand for non-invasive diagnostics is encouraging the emergence of numerous specialized facilities that may offer services like MRI. These centers are constantly looking to adopt high-end and exceptional quality MRI contrast agents to expand their customer base. Thus, it is anticipated to drive the segment in the projected period.

The clinical segment accounted for the largest revenue share of over 85.0% in 2021. Many contrast agents have been created for use in clinical practice over the past three decades, and some of them have been removed due to safety issues. Contrast MRI agents are divided into a number of classes, based on factors such as chemical makeup, magnetic field, route of administration, presence of metal atom, characteristics, picture-related effects, bio distribution, and more. There are consequently variances in the clinical consequences, action mechanisms, safety, and pharmacokinetics including their pharmacokinetics and pharmacodynamics.

Currently, MRI compounds that are more modern and secure can target organs and places. Inflammation and certain cancers are being researched with an aim to create contrast agents that are more disease-specific. Numerous studies are ongoing to develop newer contrast agents. For instance, in 2021, the U.S. Food and Drug Administration approved human clinical trials to test the safety of cancer-detection technology developed at Case Western Reserve University. It is a tumor-targeting contrast agent that accurately detects aggressive prostate cancer in a magnetic resonance imaging (MRI) scan. Numerous companies are developing MRI contrast agents that are still in the preclinical trial phase. Some of them include Reveal Pharma and Miltenyi Biotec B.V. & Co. Kg.

North America dominated the global market in 2021 with a revenue share of over 35.0%. The increasing incidence of chronic diseases, including breast cancer and cardiovascular and neurological diseases, is creating a demand for imaging analysis in this region. The region is expected to maintain its dominance throughout the forecast period. Technological innovations coupled with the growing incidence of chronic conditions are anticipated to spur the growth during the forecast period. 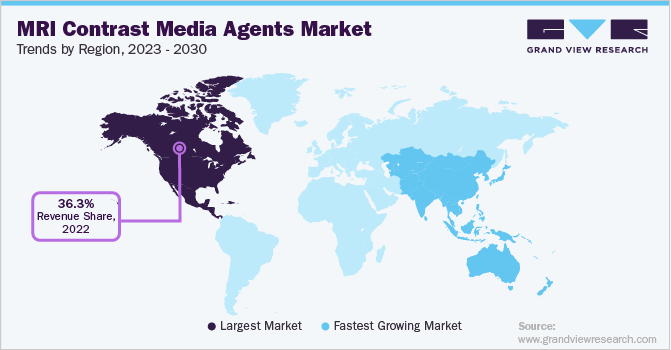 Asia Pacific is expected to exhibit the fastest growth rate during the forecast period due to the increasing geriatric population and growing demand for advanced imaging modalities. Moreover, the growing medical tourism industry in Asian countries is anticipated to augment the advanced medical imaging industry growth during the forecast period. Countries such as India, China, and Japan are creating growth opportunities owing to the rapidly expanding healthcare service industry, the presence of skilled healthcare staff, and advanced healthcare facilities and services at a lower cost than developed countries of North America and Europe.

The key players are focusing on getting approvals from various regulatory agencies for expanding their product portfolio of MRI contrast agents around the world. For instance, in July 2019, Bayer AG announced the FDA approval of Gadavist, which is a gadobutrol injection, one of a kind contrast agent for cardiac MRI for the detection and monitoring of coronary artery disease. In November 2019, GE Healthcare announced the FDA approval of Clariscan, which is a macrocyclic, ionic, gadolinium-based MRI contrast agent. This contrast agent is used to visualize the disruption of the blood-brain barrier or any abnormal neurological imaging in both adult and pediatric patients. The same contrast agent, Clariscan was launched by GE Healthcare at the 2017 meeting of the European Congress of Radiology. Some prominent players in the global MRI contrast media agents market include:

This report forecasts revenue growth at the global, regional, and country levels and provides an analysis of the latest industry trends and opportunities in each of the sub-segments from 2018 to 2030. For the purpose of this study, Grand View Research has segmented the global MRI contrast media agents market report on the basis of product, type, application, end-use, and region: 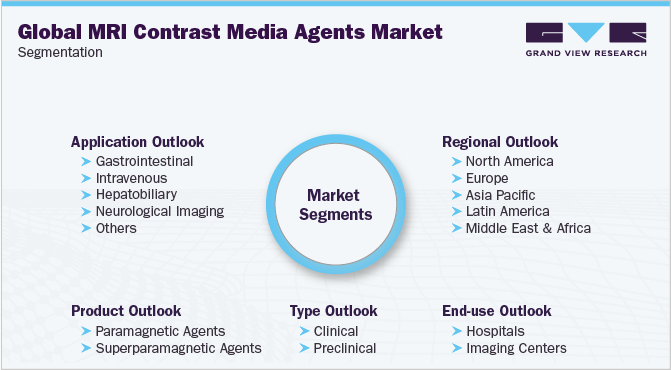 How big is the MRI contrast media agents market?

b. The global MRI contrast media agents market size was estimated at USD 1.9 billion in 2021 and is expected to reach USD 2.0 billion in 2022.

What is the MRI contrast media agents market growth?

b. North America dominated the global market MRI contrast media agents market in 2021. The increasing incidence of chronic diseases in this region, which includes breast cancer, cardiology and neurological diseases is creating a demand for imaging analysis.

Who are the key players in the MRI contrast media agents market?

What are the factors driving the MRI contrast media agents market?

b. The factors anticipated to propel market growth include the rising prevalence of chronic diseases and the rising demand for early diagnosis.