The global natural oil polyols market demand was 1,890.1 kilotons in 2015 and is projected to grow at a CAGR of 7.3% from 2016 to 2024. Shift towards the development of eco-friendly products is propelled to drive the demand for natural oil polyols over the forecasts period.

Increasing demand for environment friendly polymers owing to volatile prices of conventional polymers/plastics is projected to fuel the global NOP market. Increasing penetration of natural oil-based polyurethane across various end-use industries such as automotive, construction and furniture is also estimated to have a positive influence on the market growth. Favorable regulatory backing in the form of monetary incentives from the European Commission for implementation of environment friendly polymers is expected to trigger the market growth.

Favorable government initiatives to reduce greenhouse gas (GHG) emissions is projected to have a positive influence on the NOP market over the next seven years. Volatile petroleum price over the past few years is anticipated to boost the demand over the forecast period.

Asia Pacific is one of the largest vegetable oils producing region in the world, and has a major say in the pricing of these products. South East Asian countries such as Malaysia, Thailand, and Indonesia command a major share in the production of feedstock. Increasing R&D spending coupled with the introduction of 100% bio-based NOP are expected to have lucrative opportunities in near future.

Increasing awareness regarding the product various industrial applications such as lubricants, additives, and solvents are expected to drive the growth over the forecast period. The growth of end-use industries such as construction and automotive in China and India is anticipated to augment the global demand.

The soy segment was the largest product segment which accounted for 36.03% of the global volume in 2015. Currently, majority of commercially available NOPs are soy based with highest penetration. Additionally, soy has been gaining popularity in food industry due to low cholesterol content.

Castor oil polyol is expected to penetrate NOP market on account of high purity as well as resistance towards hydrolysis. Growing demand for high purity natural oil polyols at cheaper prices along with development in extraction technologies led to the growth of castor oil-based polyols. In addition, castor oil is one of the cleanest commercially available NOP demanding minimalistic amendments as compared to several other counterparts like soy oil and palm oil.

Castor derived NOP is expected to grow due to the presence of hydroxyl groups in the molecular structure, this makes manufacturing of finished products highly cost efficient and involves the least modification. Castor oil is second most preferred source and is projected to witness the highest growth over the coming years.

North America accounted for 44.42% of the global volume in 2015. Government initiatives to encourage bio-based product consumption in the U.S. and Canada have been an important factor driving NOP consumption in this region. High soy production coupled with increasing exports in the U.S. is expected to further complement the industry growth over the forecast period. 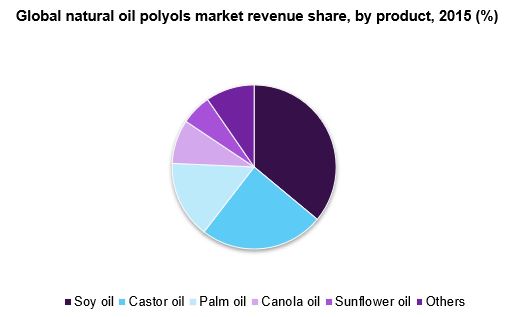 Asia Pacific is projected to grow at the highest CAGR from 2016 to 2024. Growing construction sector coupled with increasing government regulations to reduce greenhouse gas emissions and encourage sustainable development is expected to drive growth over the forecast period. Increasing automotive production in Japan, China, India, and Korea is expected to further drive global demand.

Europe is expected to grow at the second highest CAGR on account of increasing industrialization in Eastern European countries such as Ukraine, Russia, Azerbaijan, and Armenia, which is expected to drive castor-based polyols for plastic foams such as polyurethane in construction, varnishes, and adhesives.