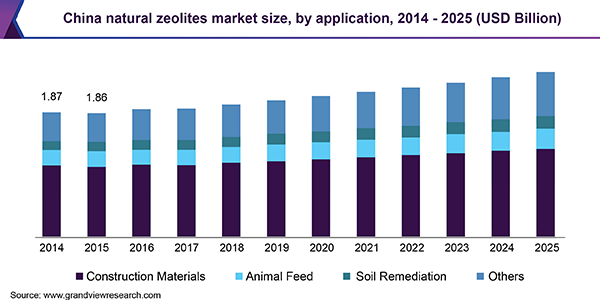 The increasing demand for lightweight concrete in the construction industry is anticipated to propel the use of the product. Lightweight concrete is preferred over ordinary concrete owing to many reasons such as improved fire resistance, less thermal expansion, and better sound absorption. Other than concrete, the use of natural zeolites is prevalent in dimension stones, lightweight aggregates, and soil stabilizers under construction materials.

Soil amendment and water treatment applications are gaining importance across the globe on account of increasing environmental concerns. The groundwater contamination caused by soluble nitrogen-based fertilizers is a major environmental concern. Natural zeolites restrict the nitrification of ammonium to nitrate, which results in reduced nitrate leaching. Also, natural zeolites enrich the soil and contribute to the development of a healthy plant.

The presence of heavy metals and metalloids in water bodies poses a significant threat to the environment owing to their toxic nature. Natural zeolites possess ion-exchange property, which helps the absorption of heavy metals in their honeycomb structure. Also, natural zeolites are an economical option in water purification and separation processes.

Demand for the product persists across various end-use industries, however, the availability of several substitutes is likely to hinder its growth over the forecast period. Diatomite, perlite, and bentonite are among the key substitutes of the product in concrete, pet litter, water purification, and soil amendment applications.

Animal feed was the second largest application in 2017. Animal feed production is significant in North America. Mexico and the U.S. are among the top feed producing countries in the world. Natural zeolites are extensively used in animal feed in the form of additives as they facilitate the proper growth and weight development of animals. Also, they help in improving the nutrient absorption in feed and prevent various diseases.

The product has also gained popularity in soil remediation, water treatment, and odor control applications over the past years. It helps in the development of a healthy plant when added to the soil. It also helps in eliminating harmful elements from soil and water. It is very effective in odor control and hence used in pet litter, deodorizers, and fresheners.

The Asia Pacific dominated the global natural zeolites market, accounting for 64.1% market volume share in 2017. The market in emerging economies such as India is gaining momentum, especially in the soil amendment application. Considering the importance and vastness of India’s agricultural industry, natural zeolite manufacturers are extending their reach in the country.

In terms of revenue, the Central and South American market is anticipated to progress at a CAGR of 2.6% over the forecast period. The demand for the product is prevalent in Central and South America owing to the increasing soil and water contamination and animal feed production. The region had over 4,287 mills for feed production, as of 2016, and due to the increasing urbanization, the region is in immediate need of water treatment projects as well. 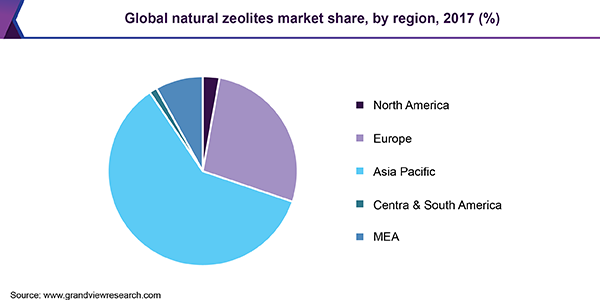 The U.S. is a major consumer of natural zeolites in North America. Animal feed is the major application segment in the U.S. market, on account of high animal feed production. According to the American Feed Industry Association (AFIA), there were about 6,232 mills including animal feed mills and pet food manufacturing facilities in the U.S., and the total animal feed consumption was 236.3 million tons in 2016.

The global market is highly competitive and fragmented. The widespread deposits across the world have led to their large-scale production. The market is dominated by major players such as Zeocem a.s., Zeotech Corporation, KMI Zeolite, and United States Antimony Corporation.

Capacity expansion is a key strategy adopted by major market players. For instance, in June 2016, the United States Antimony Corporation announced the addition of a production line to its Bear River Zeolite plant. In October 2018, SDIC Shengshi and Xiao Ben formed a joint venture, which is expected to help both the companies extend their global reach and increase their market share.

This report forecasts revenue and volume growth at global, country, and regional levels and provides an analysis of the latest industry trends in each of the sub-segments from 2014 to 2025. For this study, Grand View Research has segmented the global natural zeolites market report based on application and region:

How big is the natural zeolites market?

What is the natural zeolites market growth?

Which segment accounted for the largest natural zeolites market share?

Who are the key players in natural zeolites market?

What are the factors driving the natural zeolites market?