The global nerve repair and regeneration market size was valued at USD 6.8 billion in 2021 and is expected to expand at a compound annual growth rate (CAGR) of 12.16% from 2022 to 2030. Rising cases of neurological disorders and a strong product pipeline by the major companies are the key factors driving the market. Improved treatment efficiency for neurological disorders due to several technological advancements is also likely to contribute to the market growth. 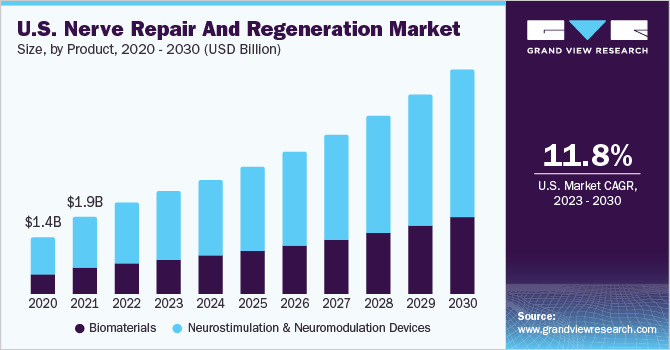 During the severe acute respiratory syndrome coronavirus 2 (SARS-CoV-2) pandemic, various government containment measures led outpatient clinics' neurological activities to be disrupted. Vulnerable patients such as those with Parkinson's disease (PD) or dystonic patients with deep brain stimulation (DBS) were at a higher risk of chronic stress as a result of social restriction measures, and their motor and psychiatric symptoms were reported to deteriorate.

Furthermore, the availability of multiple therapies for treating various Central Nervous System (CNS) disorders, such as Parkinson’s disease and Alzheimer’s, and the increasing scope of applications are further expected to boost the market growth over the forecast period. According to the Alzheimer’s Association, in 2022, 6.5 million people aged 65 or more in America were suffering from Alzheimer's disease.

Increasing awareness, environmental influence, lifestyle, genetics, nutrition, and physical injuries are some of the factors that can cause such disorders. In 2015, a report presented at the annual meeting of the American Society for Surgery of the Hand (ASSH) stated that the processed nerve allograft used in the treatment of patients with upper extremity nerve impairments may lead to the restoration of motor and sensory nerve functions. Patients treated with a PNA allograft (Avance Nerve Graft, AxoGen) exhibited recovery of motor function and sensory nerve function in 75% and 85% of the patients, respectively.

Investments by key companies to develop more effective devices are likely to propel market growth in the coming years. For instance, in May 2016, Precision Montage MRI Spinal Cord Stimulator System (Boston Scientific) received FDA approval. The company reported that its system provides 70% more relief from back pain. The biomaterials segment is anticipated to expand at the fastest CAGR from 2022 to 2030 due to technological advancements, a wide range of applications, government funding for innovations, and biocompatibility. Advanced products such as biodegradable polymers are expected to enhance spinal stabilization and healing of fractures and reduce hospitalization.

Neurostimulation and neuromodulation surgeries held the largest revenue share of over 35.0% in 2021. Stem cell therapy is expected to register the fastest CAGR over the forecast years. Various government initiatives and approvals to conduct clinical trials of biomaterials are anticipated to boost the market growth. There are approximately 570 clinics in the U.S. providing stem cell therapies and the number is expected to rise, thereby augmenting segment growth. Based on surgery, the market is divided into direct nerve repair or neurorrhaphy, nerve grafting, stem cell therapy, and neurostimulation and neuromodulation surgery. 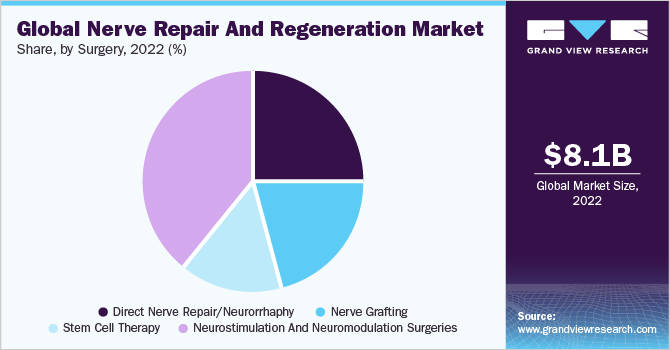 Expected commercialization of the products in the coming years due to investments by companies and research institutes is also anticipated to boost the market growth. For instance, in June 2016, Axonics Modulation Technologies was granted CE mark approval in the European Union for its sacral nerve modulation system. The company has planned to commercialize it after a follow-up post-market clinical study.

Neurostimulation and neuromodulation surgeries are expected to maintain their lead over the forecast period due to the availability of several products and technological advancements to reduce chronic pain. For instance, in April 2016, St. Jude launched Axium Neurostimulator System in the U.S. and approved the implants for Dorsal Root Ganglion (DRG). The system reduces the chronic pain for complex regional pain syndrome I and II patients, which could not be achieved through the traditional SCS system.

In 2021, North America dominated the market with over 30.0% share owing to the increased incidence of neural disorders and supportive health insurance coverage scenario in the region. The availability of technologically advanced devices owing to the presence of major market players is also a major factor fueling the growth of this region. For instance, in February 2016, Medtronic plc launched Reclaim DBS therapy for the treatment of Obsessive-Compulsive Disorder (OCD). Furthermore, Boston Scientific’s Precision Montage MRI-safe SCS, which is used for chronic pain, received FDA approval in May 2016.

The Asia Pacific is expected to emerge as the fastest-growing regional market over the forecast period due to the increasing target population base, rising awareness among patients, supportive government initiatives, the presence of unmet medical needs, and the advent of innovative technologies. China, India, Japan, Australia, and Singapore are the major countries contributing to the regional growth. In December 2015, the Australian Therapeutics Good Administration (TGA) approved clinical trials for the treatment method testing based on human parthenogenetic stem cells (ISC-hpNSC) in patients suffering from Parkinson’s disease. This approval helped in driving the stem cells therapy market in the region.

The industry contributors have a broad product pipeline for neurological disorders. Market players are in a process of introducing advanced products to improve treatment efficiency, in turn, capturing a larger market share. For instance, in January 2018, Boston Scientific Corporation announced positive results from the randomized controlled trial - WHISPER.

The WHISPER data demonstrates that patients who are given both paresthesia-based SCS and sub-perception, achieve superior outcomes. In June 2016, St. Jude Medical launched direction DBS lead and Infinity DBS system to support treatments pertaining to movement disorders. It is designed with the aim of enabling Apple mobile devices to be used as wireless controllers with the help of a Bluetooth connection and is the only upgradable DBS system for disorders, such as tremor, dystonia, and Parkinson’s disease.

In November 2017, AxoGen advanced the nerve repair platform on their annual day. In addition to the already existing portfolio for upper extremity trauma, oral and maxillofacial procedures, and carpal and cubital tunnel revision, the company has added Breast reconstruction neurotization and surgical management of pain to its portfolio. Some prominent players in the global nerve repair and regeneration market include:

This report forecasts revenue growth at the global, regional, and country levels and provides an analysis of the latest industry trends and opportunities in each of the sub-segments from 2018 to 2030. For the purpose of this study, Grand View Research has segmented the global nerve repair and regeneration market report on the basis of product, surgery, and region:

How big is the nerve repair and regeneration market?

b. The global nerve repair and regeneration market size was estimated at USD 6.8 billion in 2021 and is expected to reach USD 8.2 billion in 2022.

What is the nerve repair and regeneration market growth?

Which segment accounted for the largest nerve repair and regeneration market share?

b. North America dominated the nerve repair and regeneration market with a share of 38% in 2021. This is attributable to the increased incidence of neural disorders and supportive health insurance coverage scenarios in the region.

Who are the key players in the nerve repair and regeneration market?

What are the factors driving the nerve repair and regeneration market?

b. Key factors that are driving the nerve repair and regeneration market growth include increasing government funding and reimbursements, increasing incidences of neurological disorders, and rising medical tourism.