The global nitric acid market size was valued at USD 24.0 billion in 2019 and is anticipated to register a CAGR of 3.3% from 2020 to 2027. Increasing demand for adipic acid to formulate nylon resins and fibers for automotive interior manufacturing is identified as a key market driver. It is widely used as a precursor for the production of nylon 6,6, which is extensively used in the automotive sector globally.

One of the key applications of nitric acid is the formulation of adipic acid. Nylon, which is formulated from adipic acid, is extensively used by automobile manufacturers. Nylon products are used in the automotive industry as a substitute for heavy metal components. Vehicular weight reduction leads to more fuel economy due to low vehicular mass and thereby leads to low carbon emissions due to lesser fuel consumption. Growing environmental concerns lead to stringent regulations in developed regions such as North America and Europe, owing to which automotive manufacturers increasingly adopt lightweight materials. This is expected to drive the demand for nylon 6, 6 over the forecast period. 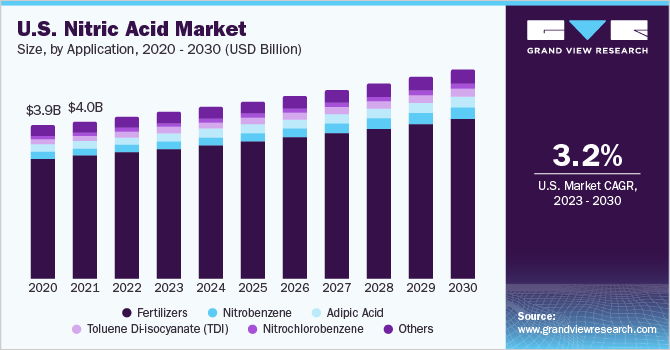 A traditional method of formulating nitric acid is through the oxidation of ammonia. Ammonia is oxidized with air to extract the product along with water in the presence of a catalyst. The product is then oxidized with excess air to receive nitrogen dioxide, which is then absorbed in water to extract nitric acid in solution form.
Ammonia is the key raw material used for the manufacturing of nitric acid. Ammonia manufacturing is primarily concentrated in countries such as China, India, the U.S., and Russia on account of the availability of large reserves of natural gas. The chemical is manufactured in various grades, including a commercial form that constitutes 68% nitrogen dioxide. Easy accessibility and access to the product has led to the establishment of several nitric acid manufacturers across the globe.

The rising popularity of polymer composites in the U.S. on account of the increasing importance of using lightweight materials and fuel economy is expected to drive the demand for adipic acid. As a result, the U.S. market for nitric acid is expected to register a significant growth rate over the forecast period.

Nitrobenzene is a precursor to aniline and is a key application of nitric acid. Major applications of the product include formulating pharmaceutical products, aramid fiber, and polyurethane foams, among others. Increasing use of the above-mentioned products in industries, including automobile and construction is expected to drive the demand for nitrobenzene over the forecast period. The robust manufacturing base for aniline in China is expected to boost the demand for nitric acid in nitrobenzene formulations in the coming years.

The North America market is projected to witness significant growth over the forecast period owing to the presence of a large number of multinational chemical manufacturers in the U.S. The nitric acid market is expected to further reflect high growth due to the rapid development of industries such as construction, automobile, agriculture, and furniture. These industries require high-quality nitric acid to formulate fertilizers and nylon. Furthermore, there has been an increasing demand for ammonium nitrate from the mining industry to formulate explosives, which, in turn, drives the overall market growth.

Germany houses some of the largest automobile manufacturers in the world. Key companies include Volkswagen, BMW, Daimler AG, Adam Opel, and Ford-Werke GmbH. This resulted in high demand for nylon products for automobile interiors and component manufacturing in the country. However, as of 2020, the industry reflected an all-time low production of around 4.7 million vehicles in 2019. This was mainly due to the rising trade tension between China and the U.S., which impacted the foreign markets and thereby resulted in low demand. 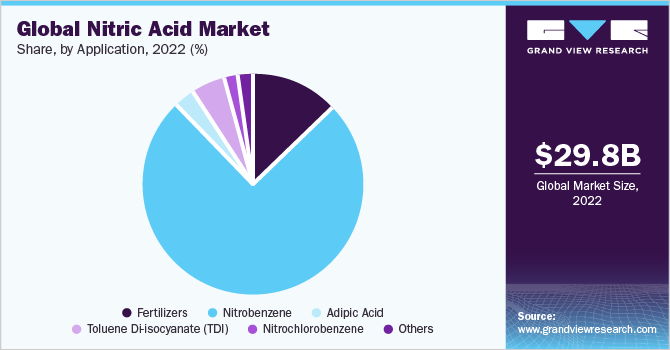 Central and Eastern Europe are among the largest producers of nitric acid, thereby driving the regional market. Furthermore, the growing chemical market in Poland and Russia is expected to drive the European market. Russia is a leading exporter of arms and hence witnesses high demand for ammonium nitrate, thus positively impacting the market growth. Robust manufacturing base for fertilizers in Russia on account of the availability of raw materials such as ammonia is also anticipated to have a positive impact on the market.

Moreover, in 2014, the Indian government declared Draft National Chemical Policy, intended to increase the share of the chemical sector in the country’s GDP from 3% in 2014 to 6% by 2020. This regulatory move is expected to promote the production of chemicals such as nitrobenzene, TDI, and adipic acid, which is expected to drive the Asia Pacific market over the forecast period. In addition, the growth of the fertilizer market in India on account of regulatory support aimed at increasing the production capacity of urea and other agrochemicals is expected to drive the demand for nitric acid.

Nitric acid is primarily consumed captively on-site, which accounts for over 90% globally. However, 10% of the merchant portion has little impact on the overall trade. Companies such as CF Industries and Yara International are the major consumers of the product for formulating fertilizers, as they are the largest global manufacturers for fertilizers. Top international players collectively account for a market share of over 35.0%. CF Industries has four nitric acid production facilities in Donaldsonville, Louisiana, the largest nitrogen fertilizer production complex in the world. It also has two production houses in Port Neal, Iowa, and another two in Verdigris and Woodward, Oklahoma.

This report forecasts volume and revenue growth at global, regional, and country levels and provides an analysis of the latest industry trends in each of the sub-segments from 2016 to 2027. For the purpose of this study, Grand View Research has segmented the global nitric acid market report on the basis of application and region: